A couple of things about this blog have been bothering me lately. One is that I don’t have time to edit properly and there are still many spelling errors and typos (and grammatical problems) and, two is that we are not sharing the full experience as the wifi has been so bad (or nonexistent) in places that it seems to take hours to just upload one post if there are photos. Anyway if there are any questions left unanswered or if my nonsensical sentence structure disturbs you at any time, please send me a message either through the comments or through the stay in touch section – the last thing I want to do is leave any of you confused or in need of further information. 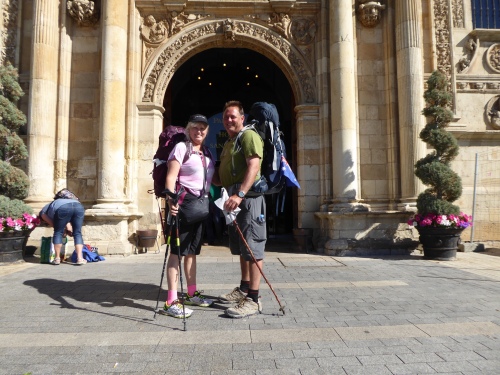 Actually we made it to Leon on day 28 but decided to stay two nights as is often the case for Pilgrims who reach Leon. We would spend one night in the Parador which is a majestic old building that used to provide shelter to pilgrims down by the river (and was the home of the Knights of Santiago) and we would stay in a double room in the converted hospederia next to the albergue back up in Saint Maria Plaza the next night. This second place is a converted monastry called Hospederia Pax and sounds quite beautiful also. My Pop used to be called Pax so it seemed like the appropriate place to spend the second night and I could go next door to the convent and hear the nuns sing their vespers in Spanish.

Leon seemed even a little more interesting this weekend as there was a rumour that the Fiesta of San Juan and San Pedro would be happening. I am not responsible for this particular rumour – it is actually given brief mention in one of the guide books and someone else had actually heard about it. It was also possible to see some sort of a timetable if you googled it. I decided if I did mention it to anyone I would include a comprehensive disclaimer in order to absolve myself of any liability should they visit Leon only for that purpose. It did seem quite likely that there was something happening as stories of people unable to reserve rooms abounded down the Camino. I failed to secure my one night in a Parador through booking.com and instead resorted to expedia and found only if I paid a bit more we could have a suite – and there really was only one junior suite available. 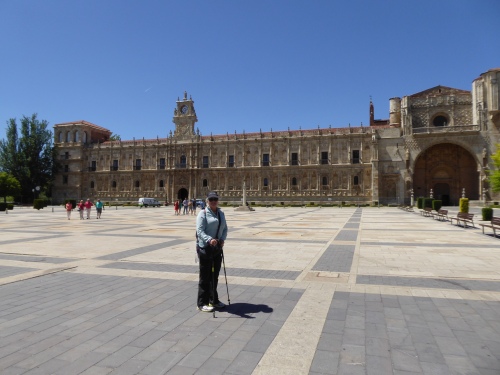 I know in some of these old buildings a suite can be quite a let down so, given that it was not a thousand dollars a night, we were pleasantly surprised to arrive and be shown up to the tower room. The windows on two walls were so big that most of them didn’t open – this did prove to be a problem later when we called for assistance with the air conditioning to be told the room is too big and very difficult to cool down – losiento – we are sorry! It was hot as hell that night and although we found the spa bath and the canopy bed a novelty it became very clear that there was a reason this room was only a couple of hundred a night. We were steeped in history – although quite likely we were in the room where they locked the the naughty pilgrims up – and waited until they expired from heat exhaustion! 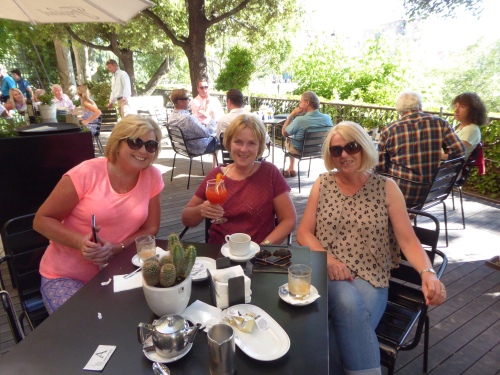 As far as Day 28 goes the walk into Leon wasn’t too bad. I reflected on our walks into Pamplona and Burgos and remember the excruciating pain I had felt with every step for every hour. The pain for Leon really only kicked in during the last 2 or 3 kilometres and the entry to the city wasn’t nearly as traumatic. The path through the old city was a little difficult to navigate as the arrows were obscured because there were drunken Spanish people everywhere. We finally found the Parador – another kilometre past the Cathedral – and settled in for the night. Our new Japanese friends were there and so were the three Irish ladies we had met in Mansilla the night before. We weren’t the only ones having a bit of luxury! After a short rest we headed back up to the old city and found the noise and the amount of drunken fiesta participants was more than we could cope with after a 20km hike so we were glad to be a little way out of the action for the first night.

Just as we returned to the Parador I heard music coming over the bridge and low and behold it was the Giants parade I had read about! There actually was a real fiesta. It wasnt a very big parade in terms of participants, but it was right at the front of the Parador and it was very unique. I was so pleased that the Fiesta was not a rumour but this small parade and the thousands of drunken Spaniards were not exactly what I had envisaged. Nonetheless it was a pleasure to have arrived in Leon on this particular weekend.

The heat (as mentioned above) was not what we expected. The sun does not go down until after 10pm here so the Parador building itself did not cool down until about one in the morning. In order to counter the heat effect we decided it was important to sit in the bar and drink some very cold drinks. I therefore ingested my first two margaritas of the trip (and a mojito) and slept very well thank you very much!

We awoke slowly and enjoyed the best breakfast buffet we had seen in Spain – eggs, bacon, fruit, juice, yoghurt and, surprisingly, chocolate brownies – well why not? I even had a cappucino!

There was a serious car rally lining up out the front after breakfast so I ducked out for a quick look. It was the closest I’ve ever been to so many Ferrari’s, Lambos, Maserati’s and Porches. (Not sure of my spelling for these). Seemed to be all English drivers again (remember the Hog rally people from Burgos?) I overheard one man saying “I’ve never been a real Porche fan until this one, the last couple weren’t great for my kind of travelling”. Who exactly buys a couple of Porches if they don’t tickle your fancy? It was interesting to eavesdrop on how the other side travels anyway. Our conversations with other Pilgrims over the last weeks were about blisters and foot pain – or whether gortex or leather is better for travelling remember? – not whether Porches or Lambo’s were more comfortable! (Clearly the Lambo and the Maserati both won my heart). 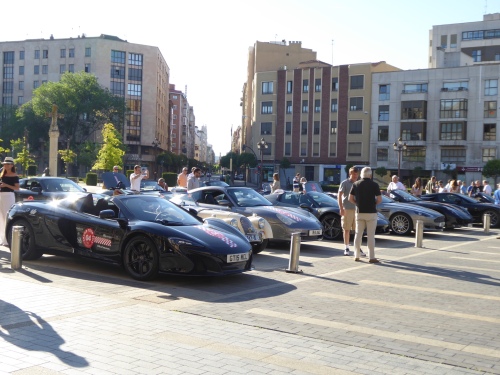 Anyway we slung on our packs and headed off down along the river for a pleasant walk back to the old city via some local markets. Our room wasn’t ready yet so we left our bags at Hospedaria Pax and went for a wander. Day 29 was extremely hot. Diver Dave’s special diving watch tells us the temperature whenever the neon sign outside a farmacia fails and today it went well into the thirties. My heel was still hurting and, combined with the heat, we decided it was necessary to send on our packs tomorrow for a 20km hike – hopefully for the last time. You may think we are weaklings, failures, not true pilgrims. But I can tell you that we either send on our packs or we stay put and wait for healing as many others do. Anyway pilgrims of old took an ass if they had one (even our French friend today still has a nice ass). Sometimes that extra weight on your feet puts the breaks on rather suddenly when the pain is exacerbated. Anyway we don’t feel bad, its our Camino and this is how we have had to cope (and yes husband has foot pains as well so he is grateful for the reprieve).

We were just leaving a bar near the Cathedral (don’t worry we are not always drunk – bars are where you eat in Spain), when one of the few Aussies we had met before Burgos came in. He was a man from Melbourne who had been walking great distances (30km plus). He had (through his own admission) failed to attend to his injuries properly and had met with the infected blister trauma. He had been told to stay put for 5 days and visit the doctor every second day so had been slowed down without choice. Thankfully I had carried the bottle of alcohol I had bought in Belorado and my betadine ointment from home and had used them whenever I needed to attend to my minimalist blisters. They had never grown to resemble horror movie makeup. (The alcohol was for cleaning injuries not drinking). My blisters were regularly pierced and had not grown to cover the sole of my foot nor my entire heel, nor had they frightened small children or sent dogs yelping into the distance. They were now becoming distant memories – except for the dry skin. The fat pad thing however was still a nuisance and I still could not find strapping tape!

It was Sunday so shops were not opened (actually we have decided that this can apply any day any time any where in Spain if there is a fiesta or even if it’s too hot) so we visited the artists market, the Mediaeval fair and finally the Cathedral. We have been learning a lot about architecture (in our minds anyway) and about the ways these magnificent buildings were used to impress people and bring them closer to God. You might think it unnecessary to visit all of these churches but, and my beloved wholeheartedly agrees, even if you are not religious in any way they are spectacular (and very very cool on on very very hot days!)

We bumped into the American students again and they had mistakenly booked the wrong night on Booking.com and were unable to get a hotel last night and were staying at Pax where we were tonight. They were lucky enough to get beds in the Albergue next door the night before. You see cities are where many pilgrims choose a hotel for a change so they can relax and see the sites! This is clearly difficult when the fiesta is real and not just rumoured!

For the record Hospederia Pax was friendly, beautiful and clean; it also had the best air-conditioning, the nuns singing vespers next door were beautiful and the square was so old and unique we should have stayed there for the two nights! 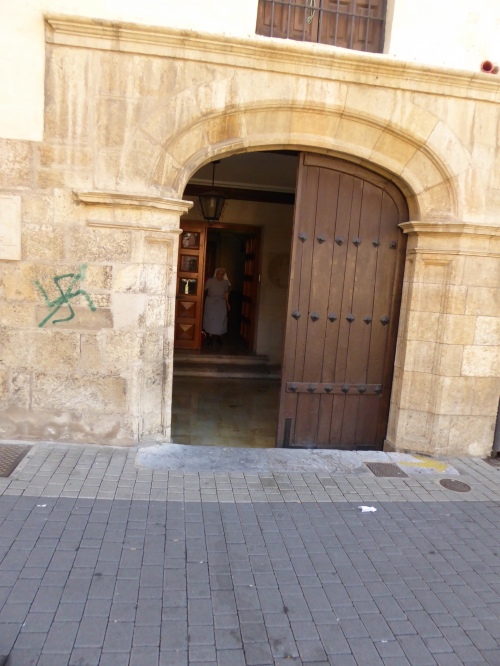 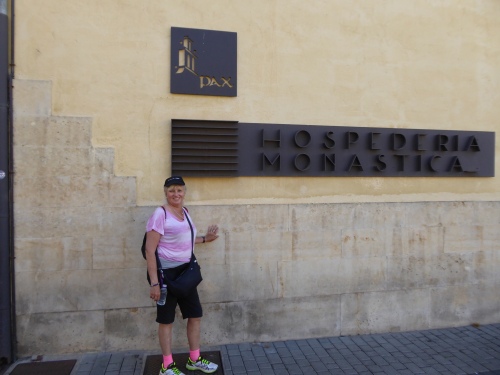