It was going to be a sad day today as our Irish yoga guru was leaving us at Logrono. Nevertheless we were entering Rioja wine country and we were still in good company with Speedy Gonzalez (also known as the Brazilian diplomat) and the Irish Choirmaster.

We did our usual early wake up and tried to leave well before sunrise but unfortunately we had been misled by the bar maid at the hotel where we were to leave our spare stuff. Contrary to her information it was closed. Fortunately we sweet talked the cleaner and she let Speedy Gonzales and I leave our little bags in the reception.

It was going to be easiest for our guru to walk the first 10 kilometres with us into Logrono and catch the 10am bus to San Sebastián in order to make her flight home the next day. We had a cool and enjoyable walk into the darkness and managed a selfie using the hiking pole attachment just as the sun was starting to rise. 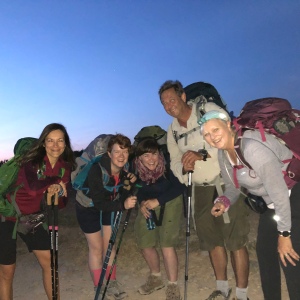 As we were rushing into Logroño we heard our Russian friend call out from behind and she had a chance to bid farewell to our Guru.

We moved on to find a taxi to transport her to the bus station (our Guru not Olga – she was still walking). There were a few tears as our dear friend sped off in the taxi. Funny how well you feel you know someone after just a few days travelling together – they say the camino is like a metaphor for life – people come, people go and we all keep moving forward. But I reckon we’ll be going to Ireland to visit her one day – especially when there’s a music festival she’s organised on!

As saddened as we were by this farewell, we turned around from the taxi rank and there, like an oasis in the city it was calling us – “The Drunken Duck” – desayuno ingles – English Breakfast! It took all of about half a second for the four of us to agree on this one.

After desayuno we followed the arrows through the city and encouraged speedy to find a bank where she could change her money. The rest of us reclined on a timber platform that appeared just when we needed it. We stretched out around our packs removing shoes and generally developing a hobo identity.

Thankfully speedy returned successful after quite a jaunt around the city and we headed back out of town towards Navarette even taking time to smell the roses.

We had another fairly decent break at the lake cafe on the outskirts of Logroño and eventually made it to Navarette in time to check in to a private albergue and catch up with a heap of people we had last seen at Viana, Estella and Puente La Reina.

By now it was getting hotter and people were developing some serious blisters but we were mostly blister free. After I’d showered and returned to the main square a bunch of people were sitting at a table discussing the next days plans. Olga had encountered the medicine woman and had had her feet carefully taped to help her recover. My knees were somewhat concerning and the expensive knee guard I had bought as we passed through Logroño had proven useless for my knee cap tracking problem. Luckily I had carried some tape from home!

While we were walking around a Peregrina came bounding down the street stopping my beloved and asking him to open some wine. She had taken a single room to relax for the night but had no one to help her when this serious dilemma became apparent.

We bumped into our Canadian friend again and went off in search of some food. We struck gold finding a restaurant packed with locals where the total menu price was only one or two euros more than the standard pilgrim menu. (14 euro total each) There was soup, paella, ribs and spaghetti all very tasty and, astoundingly, we were served a salad that did not solely consist of iceberg lettuce and tomato!.

Off to bed early again ready for another pre dawn start.