We were up early today and out the door first in the albergue again. I had had my first breakfast in the albergue. They even had a toaster! So much for not eating bread – the choice was bread or no bread. I also had a cup of tea. I was ready and waiting patiently outside for my beloved as he pottered around for a change.

The day started with a hill also for a change! At least it was dark and cool. Eventually we reached the top and the sun started to rise as we were admiring the lights on the wind generators and looking back we saw the sun rise. Apparently we are already on the meseta here but its still very hilly. 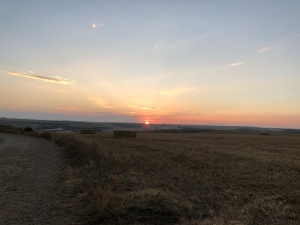 We finally came down into Hontanas and had second breakfast where we met Jack and his family again. Knowing that the rest of the day was going to be an easy walk saw us speed off again soon after. Spotted an interesting garden statue just as we were leaving.

We hit the ruins at the convent of San Anton just in time. I was busting! Desafortunatemente the hospitalario was cleaning so the toilets were closed. As luck would have it there was a bar around the corner opened so we moseyed on in for a refreshment and a toilet break. There we got to chatting with a nice Spanish man who had we been running into over the last couple of days. Let’s call him the sommelier! He helps spread the joy of Rioja wine across the world and has even helped Australia experience the love!

Anyway the owner gave us a piece of watermelon each and we enjoyed a welcome break among the ruins. 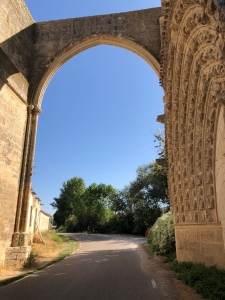 We wandered into Casterojez not too long after and had a quick look at the municipal albergue but the hospitalario was exceptionally rude so we decided against it. Instead we snagged a double room at the cheapest hotel in town – El Meson. 36 euro and it was nice to have our own bathroom – even if the shower sprayed across the toilet! 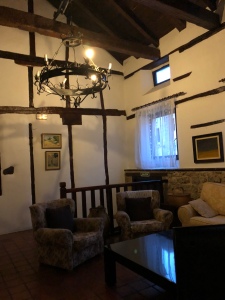 I rested while my beloved visited the plaza mayor and ran into the sommelier again along with the Canadian army colonel and a few others we had been getting to know. The sommelier had opted out of the municipal because the guy was so rude to him also.

I headed up to the plaza with my beloved a bit later and had a great chat with the old fellow in the pilgrim shop. Great eclectic store and great man! I would recommend that store to all pilgrims! Got some foot cream off him – lets see how that goes!

We wandered up further and had a limited meal for dinner – I think it might have been tinned spaghetti but I didnt care – I was hungry and tired so off to bed I went! Buenas noches!