As luck would have it our first day began without rain – it wasn’t exactly clear sky and sunshine but it wasn’t too bad given that the weather reports suggested thunder and 100 percent chance of rain and thunderstorms.  Our resident comedian and chef informed us that there would be no rain until after we arrived at Orisson.  He wasn’t a German yoda but I had a feeling he knew what he was talking about.  After all he lived at the foot of the pass. We took a few shots of the buildings and of other people taking photos of the buildings, had a bite to eat, and headed down the road to Santiago with smiles on our faces and the cool morning air on our skin.  None of this getting up at 4.30am for our day to begin, clearly that is one of the reasons we became friends in the first place!  We had had a surprisingly good nights sleep in the albergue although I was a little anxious about what the day would bring and Michelle was also a little concerned that her encouragement for me hiking after a stress fracture and a ruptured pf Might result in problems. I assured her Iwas fine and I could always catch a taxi if things went pear shaped.  There was always plan B (until we went off road and passed the point of no return that is) We both had a desire to beat the rain so aimed to be up early and consequently at 7am we were out the gates of St Jean and heading up the hill in a line of pilgrims “on the road again”.

Being the experienced hiker that I am (snicker snicker) I sent on my main pack of course because my feet were being put to the test again and there was no need to prove anything.  The pack was full of Spanish language books and spare shoes and it needed a forklift to raise it into the back of the truck (not really but it was apparently 16 kg when I weighed it in the pilgrims office. Although I later discovered it was actually only 14.9kg). Anyway I wanted to enjoy this hike and not feel like I’d walked through the gates of hell once we went through the wall at the bottom of the street and started going up.  My day pack weighs as much as many peoples packs anyway as I carry emergency everything in case a blizzard comes over and we are forced to find shelter in a mountain refuge for a month (or in case I need to tape my foot or file a torn nail)!  Always comes in handy when someone is injured or something.  Michelle by contrast carries a tent, a cooker and everything but the kitchen sink and probably comes in at 7kg.  Actually Michelle also took a couple of spare jumpers for me as my day pack was clearly too small once I put the chocolate and fruit in!

So off we went down the hill and out the gate and even before we crossed the road and started the ascent the first thing we came across was a donkey camping ground!  So that must have been where Anthony and Marten (you know the Frenchman with the nice ass) stayed last year!  The memories came flooding back.

Photo of Anthony and Marten

Thank heavens my memories focussed on the amazing experience that is the Camino and not the pain and torture I had felt in leaving town dosed up on Imodium and feeling like I was carrying a bag of lead across a path that thousands had gone over the ages to reach the wonderful land of Espagna. The Romans had done it and even Napoleon himself had done it I am led to believe ! Surely I could do it again.

The strange thing was that although it was almost a year to the day since I had trod this path last year with my beloved, it felt like only yesterday.  Maybe because hiking with Michelle made it feel so familiar.  I could see that I was a little slower than Michelle but you will all be pleased to know that I was actually faster than the slugs and snails this year.  And when we left Hunto I was literally zooming up that hill.  That was the particular hill whereupon my beloved chastised me for not moving when I had indeed been lifting one foot after the other for some minutes.  It’s seems back then my movement had been so slow that it was not visible to the naked eye!  This year things were different.  Those slugs had no chance!

I encouraged Michelle to go on every now and then as I was concerned I was holding her back but she was enjoying the view and we were both taking plenty of photos as we meandered our way up the first 8km with steepest gradient of 20.3% according to my trusty app.  (My american friend s may need to convert that one).  I was a little sad that many of the friends my beloved and I had met last year were not going to be around the corner.   I was also a little sad that my beloved was 10000 miles away and not able to share this adventure.  On the other hand I was so thrilled to be with Michelle as she started the first few days of her next adventure and I was thrilled to be walking without pain!  (I had taped my knees and was wearing runners compression socks and ankle supports from the outset which helped immensely).

We made it to Orisson in around 3 hours including our breaks (this was only 2 hours walking and significantly faster than last year) and waited a while for our beds.  Three hours may not seem much but this stretch to Orisson is a good warm up for the next day and the little Albergue on the mountain is such a pleasant way to start the Camino.  Today was especially good weather. So much so that I actually heated up a little too much over the last couple of 100 metres. But the crisp mountain air cooled us down quickly when we arrived and we settled into the dorm and dropped down for a bite to eat before an afternoon nap.  We were thrilled that we were allocated a dorm of 6 women as the men are known to be champion snorers – remember the Korean national snoring champion last year?  He was no where in sight – thank heavens! 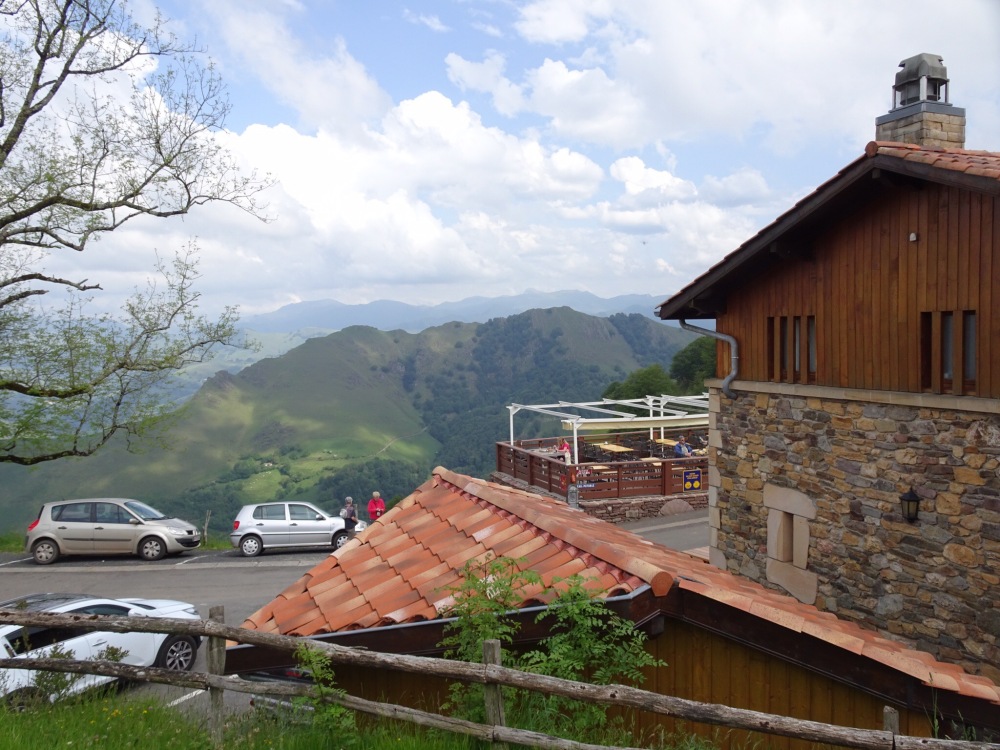 While Michelle was sitting out admiring the view I thought I’d have the first nap.  It was at this point I discovered that amongst our companions was both a snorter and a grunter – Both having afternoon naps at the same time.  Tonight was going to be interesting! I was sick last year and drugged myself up that night and slept for nine hours straight.  Not sure how this was going to work now that I was in peak condition!

After a nice chicken roast We had the mandatory introductions and met some nice people and, this will sound odd, I felt a little sad there were only two Americans there (and Michelle was one of them.). Last year we met some of the nicest people at Orisson and they were mostly Americans!

After dinner and just before bed, a beautiful rainbow appeared outside our window.  When we went back outside it had doubled and a few others came out with cameras in hand to witness the spectacle.  Tomorrow would be a nice day!

If you are reading this and you were in our dorm that night, and you didn’t hear anyone snoring, grunting or snorting that night – ponder that thought!﻿