Well the few Italians here were – you know – not exactly early to bed but certainly early to rise!

I don’t understand actually. When my beloved and i left early to beat the heat last year we barely spoke if we were in a dormitory and were paranoid of waking others. The Italians thus far appear to have Difficulty containing conversation and extreme difficulty with volume control. I’m sure my Australian friend Gavá could confirm for me if this is true in every Italian household. But fear not! I have found the solution. Yes, the biscuits, galletas, cookies – whatever you call them. Once inside the mouth they are so dry it is impossible to talk! It was magic ….

I did not buy them purely for the Italians but they have proven themselves multi purpose. You can buy a cafe con leche from the machine in the dining area. Stuff a bicky in your gob (Australian or at least English for stick a biscuit in your mouth), and you are set to walk 5 or 10kms until you find a shop open. Or, if you are Italian, you are prevented from talking for a few minutes and therefore other pilgrims can continue sleeping! Perfect!

We said goodbye to a lovely bunch of people from all over the place. Denmark, Brazil, Spain, Argentina, USA, Canada, UK, Portugal etc etc And yes the Italians were actually lovely too – they just have the disability in terms of volume control. 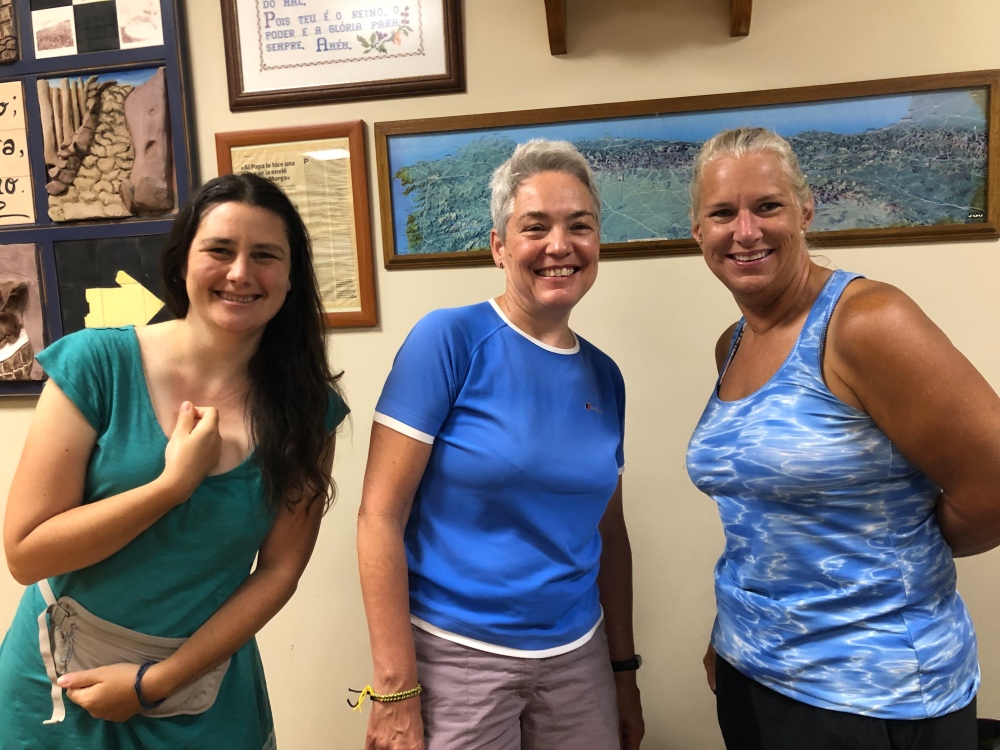 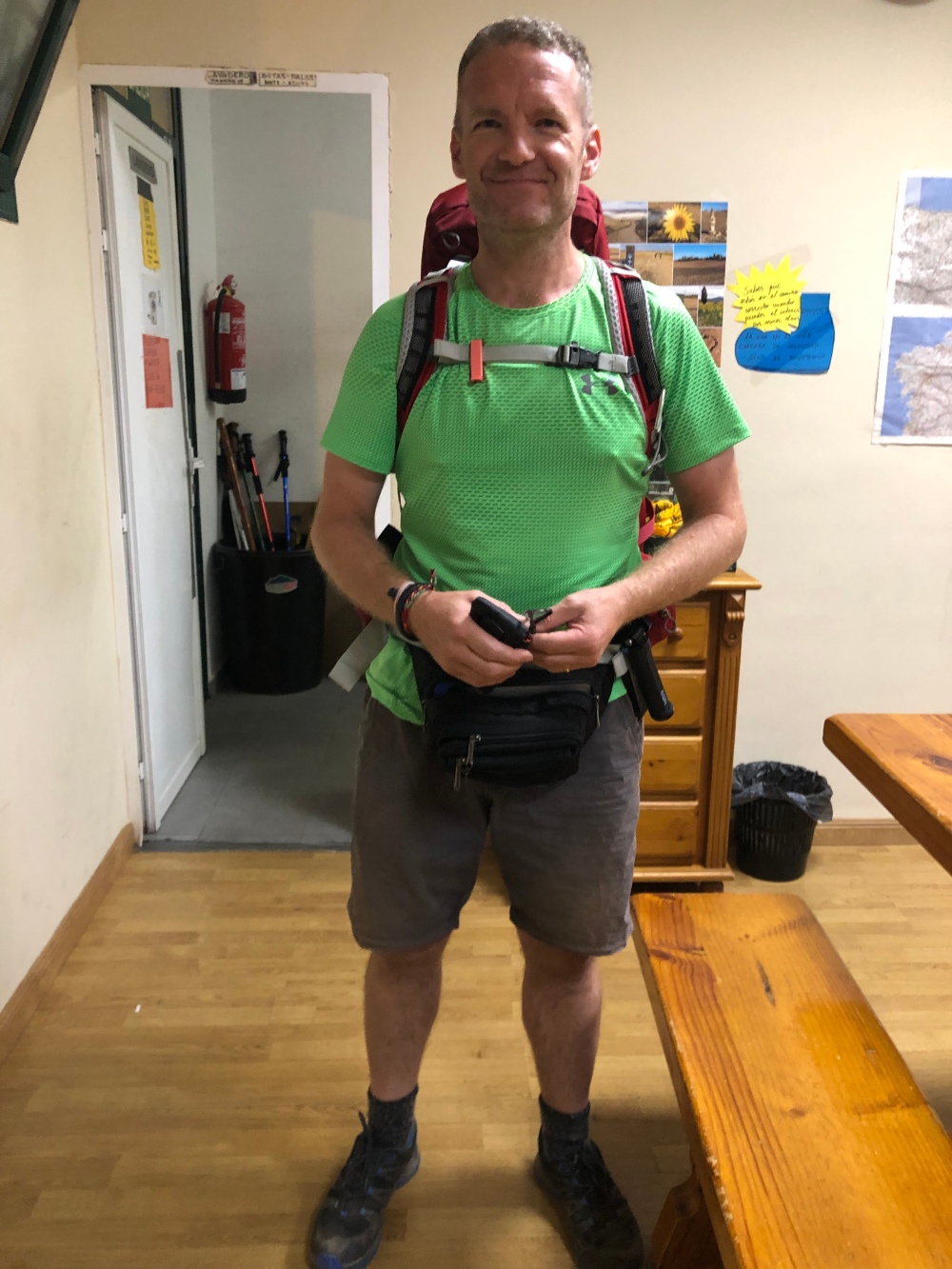 I was impressed with 4 gentleman who were covering 40km days. I hope they don’t suffer injuries down the track! The meseta could be their demise but I hope not. 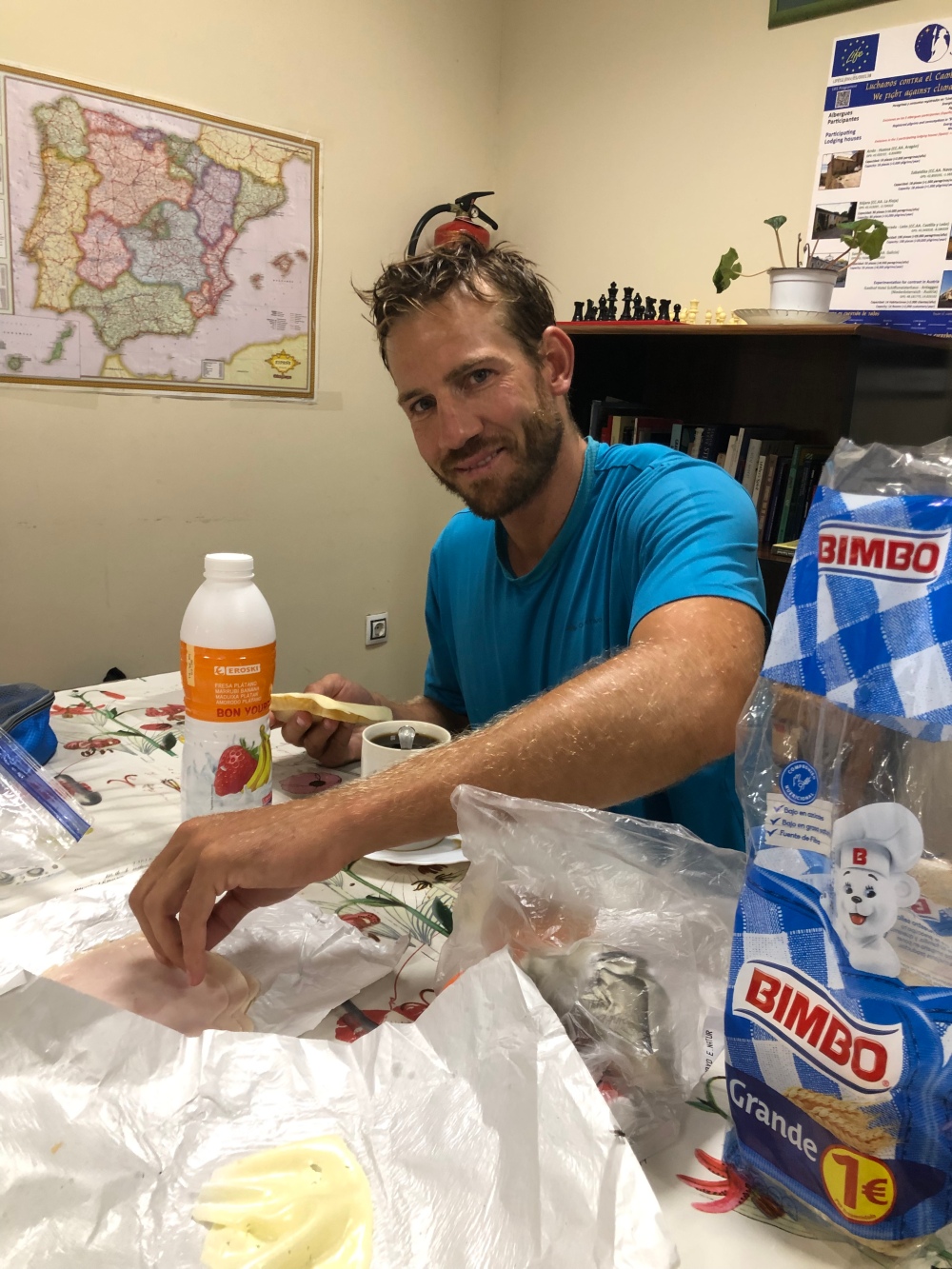 Our cleanup and sheet washing was surprisingly quick this morning. We all sat for a few minutes before zebra and I headed to our favourite bar for cafe con leche and wifi!

Zebra continued on with journal in hand to see if it was possible to visit the library without a card. We have discovered that the simple things in life can be a challenge in Spain. She discovered no hay problema but also no wifi! I returned to the albergue to have a shower and catch up on some rest.

In the 8 days since leaving home I too had travelled to places my backpack had been – and even further. It did not make it to Dublin, Biarritz or Bayonne, nor did it travel over the Pyrenees before travelling through Pamplona and logrono to land in Najera.

No wonder I felt exhausted. I arrived in Najera a day early to catch some rest before starting volunteer work but those darn spanish hospitaleros all left a day earlier than they should have! Lesson to other volunteers – don’t just drop in to say hello until you are actually ready to start duties!

Then we had the tornado that was Mavis, the Tim tam and vegemite scandal, the near full dormitory. The 5am starters, the Italian late night eaters and I was near collapse by yesterday! Thank heavens for a quiet night last night. This meant I could potentially have a break with Zebra and Hans solo when he passed through today. Buenas!

I ducked out to buy some more caramelos and saw the chica de limpiar (cleaning lady) over the footbridge. She greeted me like a long lost friend with smiles and kisses. I told her my friend from Australia who was here last year said to say hello. I hoped she imagined it was an uncontrollable a madness we suffered from because in our country we all like to clean 90 sheets a day! And therefore she would not tell us again no need!

When I returned to the albergue with lollies in tow the sheets were again rolled to perfection! No pasa nada! Mavis is perfection!

Nearer opening time Zebra and I heard children laughing outside – one of my greatest fear was a school group of 90 would arrive as spanish school groups often do the camino. I was shaking in my hiking sandals!

Afortunatamente they were just neighbourhood children passing through! Phew

We opened to a few pleasant surprises – the blue mountaineer who had caught the train to st Jean with me who, after hearing of my missing pack, had offered me his sleeping bag because he also had a sleep sheet. There also was Hans solo with his Irish spanish friend in tow. And my favourite Italians from Roncesvalles the Italian Sommeliar and his mother in law! There were Americans, Germans and a few from España too believe it or not!

By 2pm the crowd of 15 had gone and we sent Mavis to la comida and her siesta so we too could enjoy some free time later. Before dinner we rescued a backpack and boots from melting in the dryer because a young lady had literally washed everything and was a little concerned about some itching she had obtained at her previous nights abode!!!

We Enjoyed our dinner with Hans Solo, the Irish Spaniard and a young American fellow whilst Mavis held the fort! Unfortunately the menu was the same as every day, vegetables were hidden in the meat! The one perk of hospitaleroing was to be granted one meal a day outside – but always at the same spot – desafortunatemente!!!

All in all today was remarkably easy. Zebra and I discussed each night the lessons for tomorrow- today we didnt need to. I finally felt as though I had shaken jet lag, Mavis was happy having a long lunch and afternoon siesta. The dormitory was full but only down two sides.

Yet as I drifted off to sleep on my mattress on the floor i reflected on the challenges of the previous days and I couldn’t help but wonder what mañana would bring!