Yep – even the Italians were quiet out in the salon this morning; barely a whisper before 6am. But then I’m afraid to say, a great challenger for the international snoring title had moved himself to the emergency bed beside Mavis last night. These people preparing to leave early were likely all absolutely shattered! Perhaps they would swear off municipal albergues, turn to private pensions for life, such was the sound of the challengers snorting! Surprisingly though, people still seem to donate money and write wonderful comments in the visitors book!

Zebra decided she was going to do something different to avoid this ruido occurring again if possible- Mavis and other pilgrims need sleep. Mavis informed us however, that she had great ear plugs and didnt hear a thing!

I said buen camino to a lovely couple from Northern Ireland. They were so pleased to have stayed and said nowhere had they been made to feel so welcome. Ice lemon water, melon, sweets and even a biscuit in the morning. They had wonderful accents that reminded me of my grandmother!

Anyway we cleaned and rolled the sabanas (sheets) and I went to the piscina for another break. I sat on a bench seat away from everyone to call home and have some quiet time. All of two minutes later a whole family of locals almost sat on top of me. I moved. I sat on another bench seat at least 50 metres away from anyone and called my beloved thinking I finally had a quiet moment. Guess what! Another family came and plonked their bags around me and started chatting at the top of their voices. They could certainly give the Italianas a run for their money! They clearly all had taken dibs on seats at the beginning of summer. I sat in the coffee area and had a few minutes reprieve! 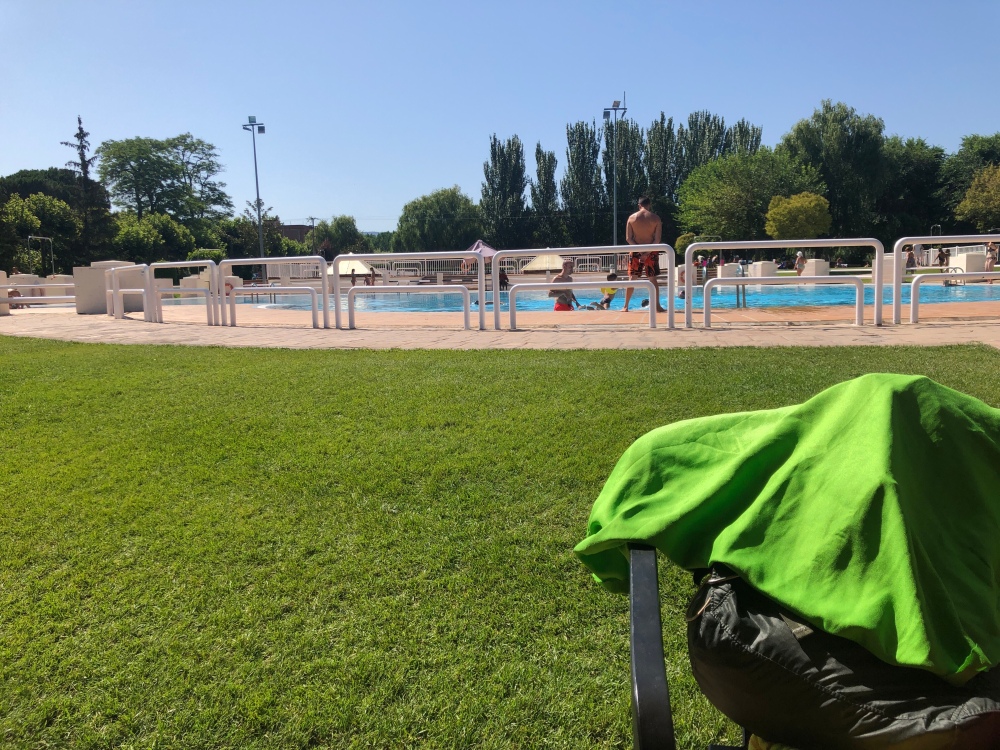 After a long shower I headed back to the albergue to dump my shower and swimming gear before heading up to the shop to get some food. I noticed Zebra had sent me a message as she had been stranded outside without a key. Mavis had taken the only full set when we had the “handover” and today she took control and went to get extra keys cut so we all had copies of everything. Desafortunatemente the locksmith was closed until tomorrow.

We opened to our smallest crowd yet and a short time later the Golden Girls from Orisson arrived. It was great to again have Aussies in house! They even wiped the table down!

While checking people in I had the pleasure of listening to two españolas complaining that no one speaks spanish on the camino in Spain! To which I responded “Pues yo soy australiana y he viajado muy lejos y me ha costado mucho dinero para ser voluntario y ayudarlo”. Well I am Australian and I have travelled very far at great expense to volunteer in order to help you. That stopped them in their tracks! Well maybe not but, anyway… Most people have no idea how these Albergues work. Someone even thought we had our airfares paid for! That would’ve been nice. But nope totally volunteer work here.

We have had quite a few interesting guests. Chronic talkers obviously, people breaking down in tears after a long hard day; People with chronic illnesses needing secure refrigeration and freezer use -they were lucky to find this in our Albergue but we assisted by utilising the small bar fridge from which the vegemite and Tim tams had been pilfered!

Most interestingly is the number of Spaniards who chose to stay in a donativo municipal albergue and, even during the hottest day, then ask us to turn the air conditioning down – why not stay in the non air conditioned albergue up the street and relish the oven like interior? 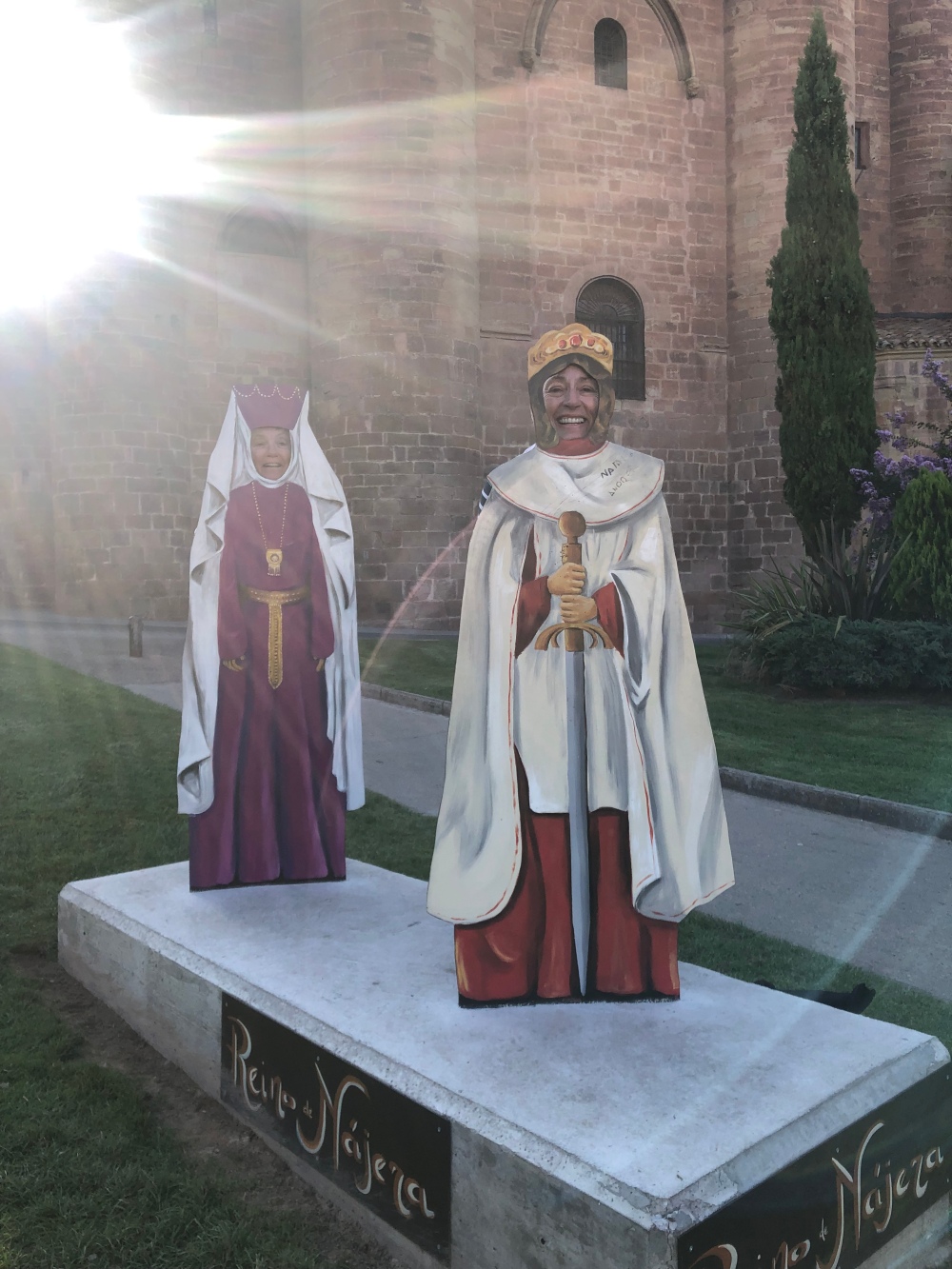 Anyway the day passed quickly and after I toured around with my orisson room mates from the USA and OZ, Zebra and I took our friends to have a meal at our usual restaurant. After the thrill of last nights dinner we were clearly over the moon to be back having vegetables in the traditional pilgrim way! 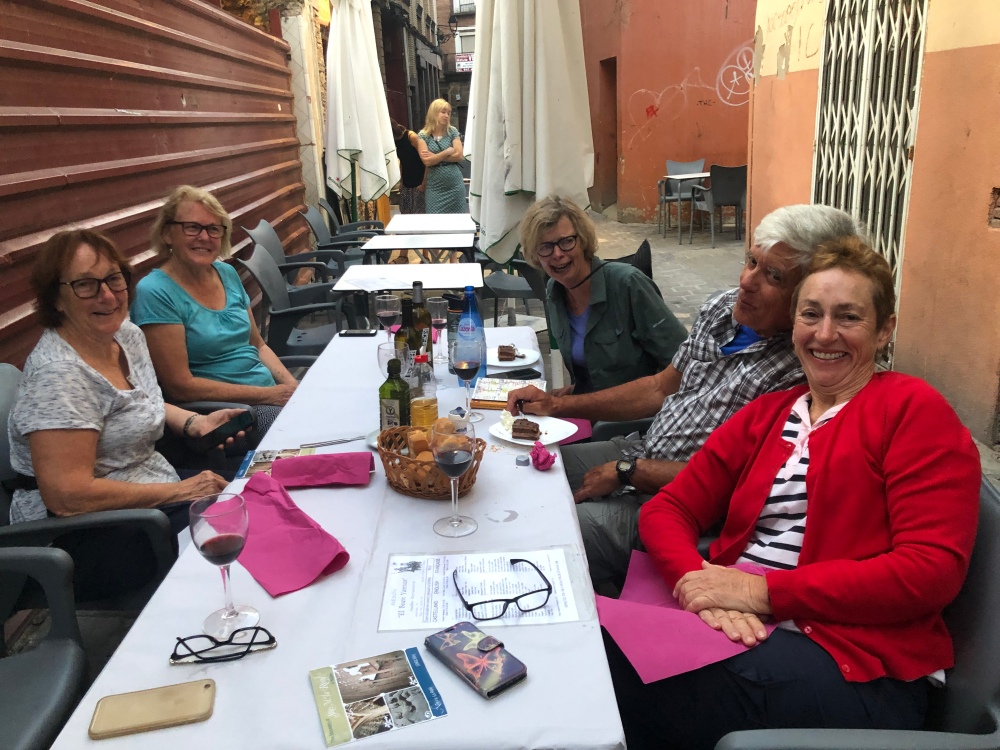 The night ended quietly for a change and we went to sleep dreaming of great bowls of salad and mixed vegetables.