This morning I stood outside and watched a bit of the chaos in the salon. I am the first one up each day. I put the washing on, then I give the pilgrims biscuits. I open the salon door and let them escape. But I dont turn the lights on until closer to 6.30am. Everyone should be out by 7.30am – or should they? (I heard Mavis telling some Spaniards 8 was okay). Zebra and I were frustrated! The rules for the kitchen and the departure were not included in the military controlled regime for Mavis!

The Danish girls were the last to leave today which didnt bother us. It was still only 7.30am – they were very happy – I think Denmark is the happiest country in the world isn’t it?

I said good bye to a German fellow who had started in paris. He ended up in hospital for 10 days after he jumped ahead to Le Puy because he thought it was too industrial and boring. Then he ended up starting again at Saint Jean because it was lonely and there were no people. 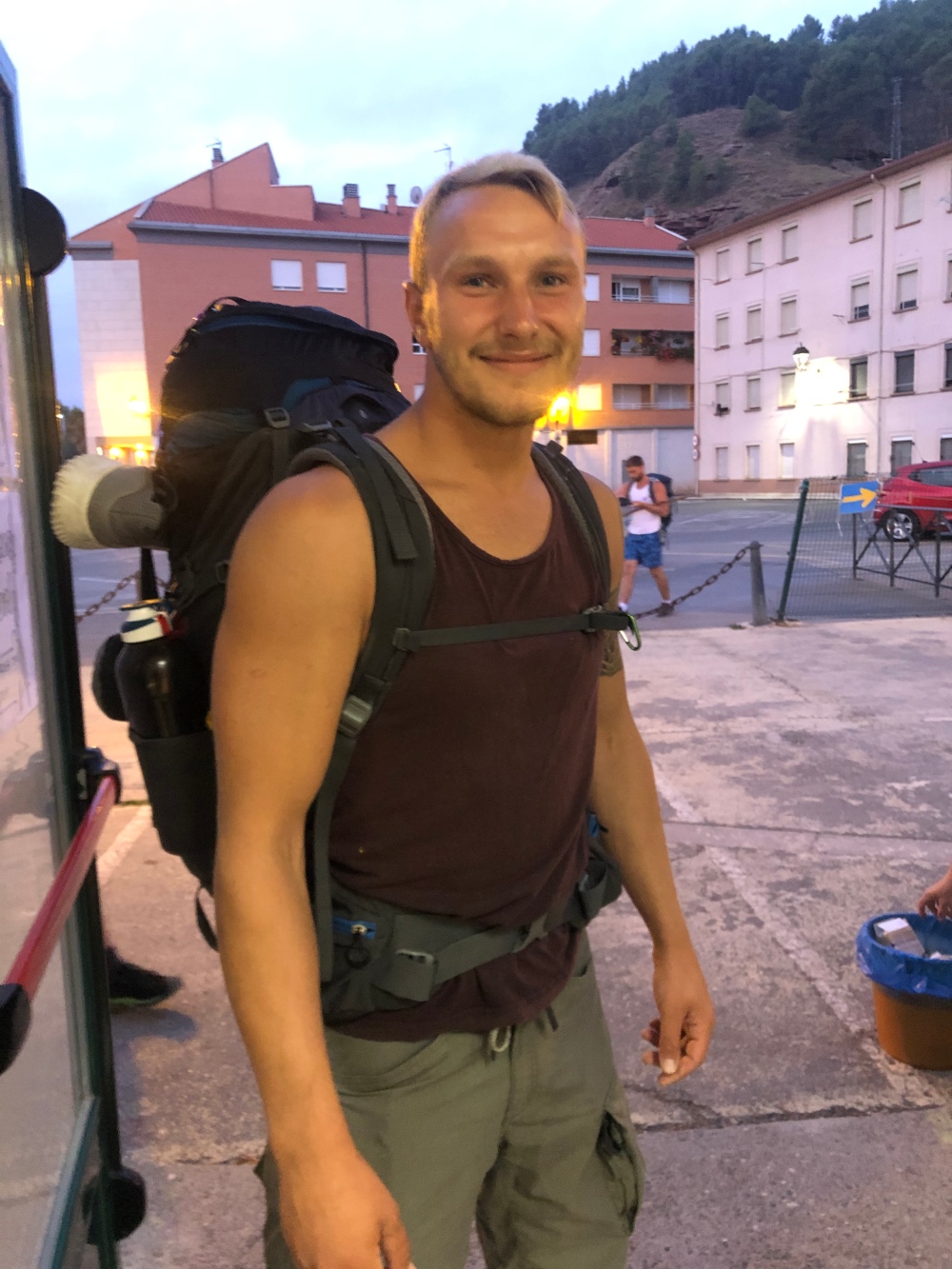 Or do we clean other things? Like showers and kitchens? 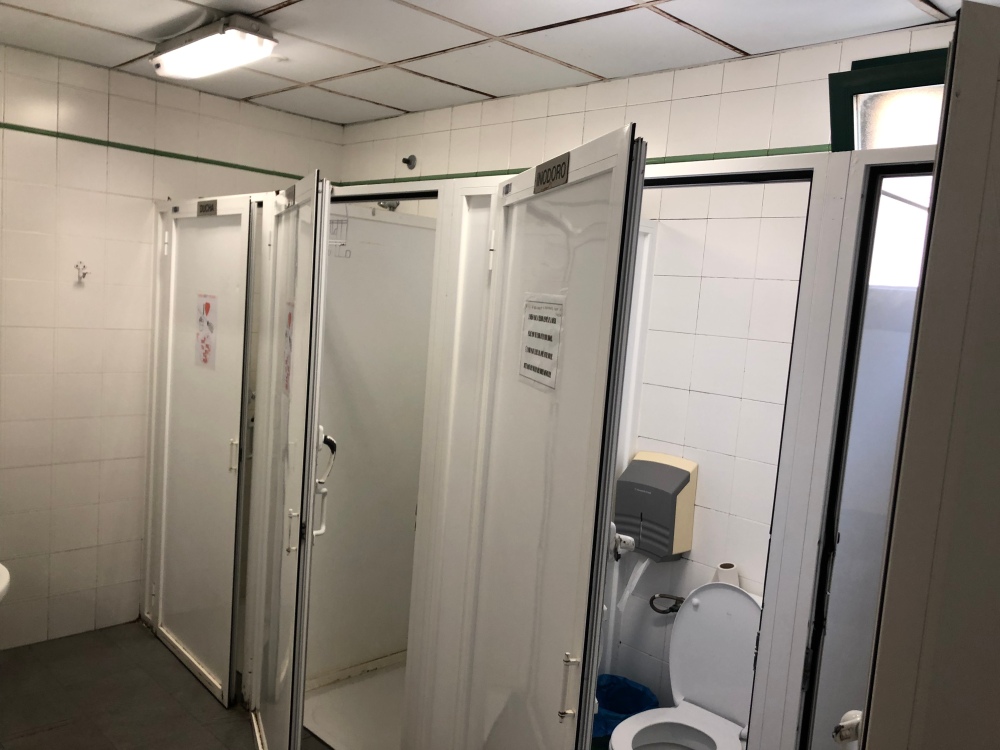 Well we do it all actually. And when chica de limpiar arrives we only do sheets. She said it was unnecessary to do sheets everyday remember? She thinks, or at least did think, it was a waste of energy. But last week maybe changed her mind!

Mavis as you can imagine wants to clean everything. Zebra is the champion kitchen cleaner!

Zebra bought a new scourer and some mop bucket inserts to improve the process. I seem to control the laundry. It seems I am a champion sheet washer. (But remember I am not a champion sheet folder okay!)

This morning Mavis went mad with the now fixed vacuum cleaner and pulled every bunk off the wall to suck up any sign of rubbish. 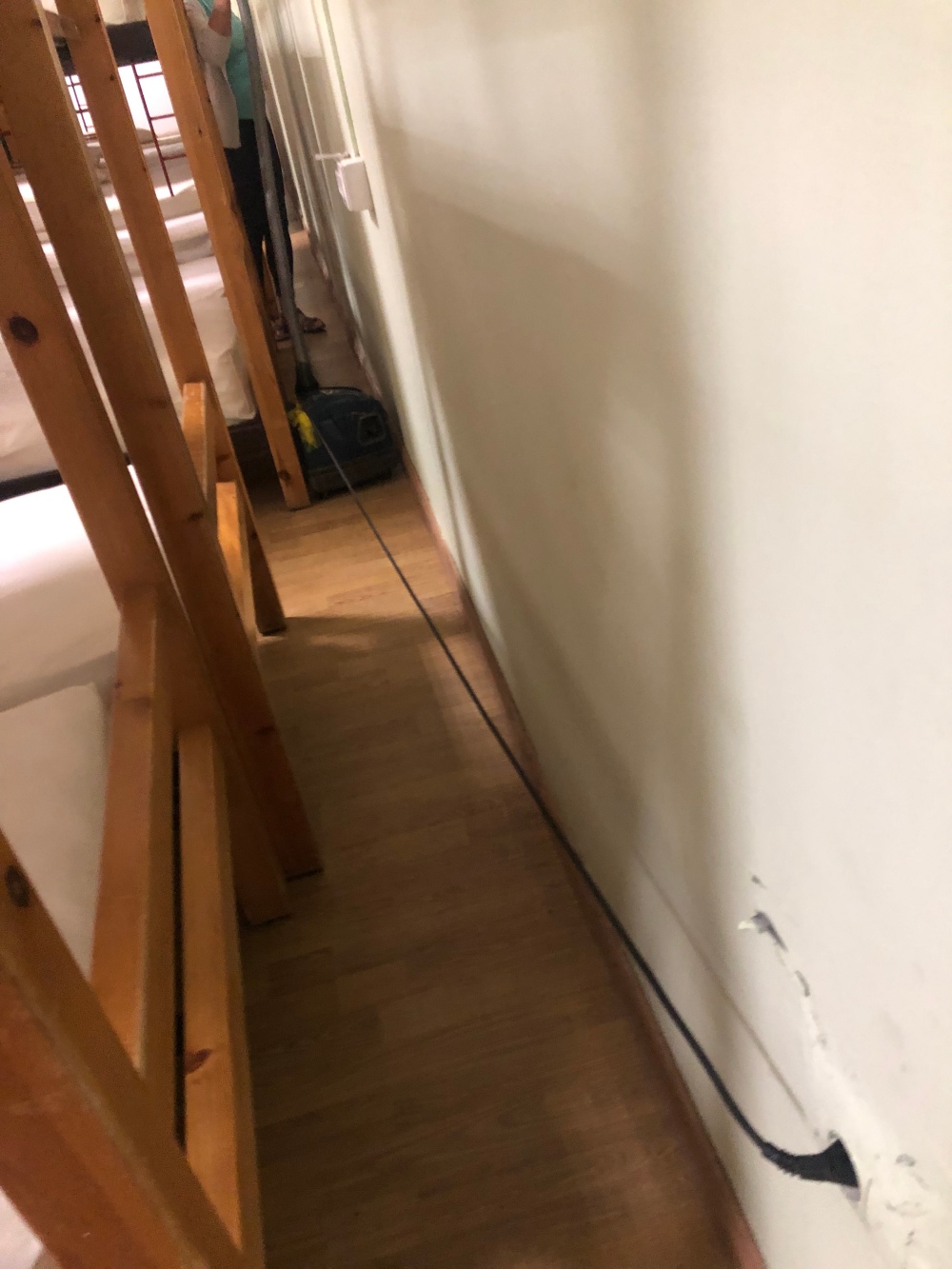 I was exhausted watching her! When she had finished she told me there were no chinchas! That was good news! Until the next lot of pilgrims arrive.

I was doing my chores too but watching Mavis made me dizzy! I bought Bam and toilet duck and windex (or at least the spanish equivalents) and cleaned the bathrooms. For your information the senoras baños are worse than the boys! But really not that bad.

I am sorry to say that after the Italians have been cooking the kitchens are worse than anything! No wonder they take all the utensils away at other albergues! It’s a nightmare getting people to wash and dry and put away after they’ve eaten. Especially when Mavis doesn’t make them close up on time. Still they have never cooked us dinner!

After this cleaning exhaustion we went for a walk.

There were people fishing in the river again. 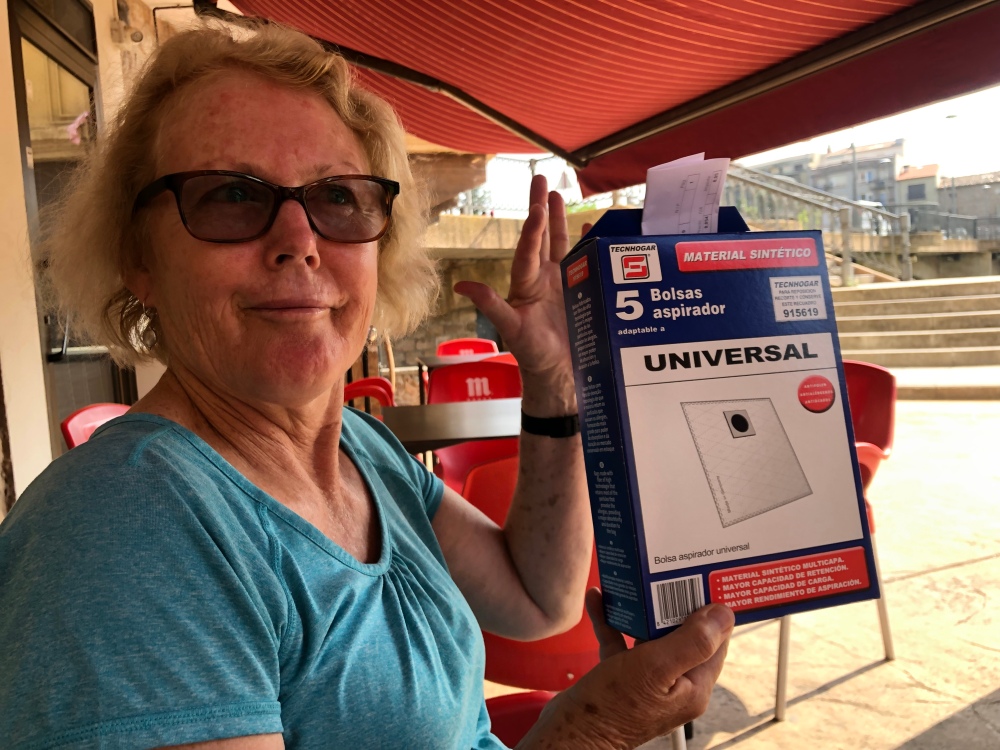 We wandered past the butchers shop which has quite an attractive facade!

Then we went to our 3rd Thursday market and saw the three green vegetables for sale. Zucchini, beans and a local leafy green cabbage or something – actually there was iceberg lettuce and a couple of other greens but not many compared to home. There was plenty of fruit including my favourite flat peaches.

We realised we were almost locals now! This was our third Thursday market! We also bought some spare second hand clothes for women to use if they needed help with a military wash! We thought Mavis might like them too as she kept grabbing the left over clothes we were trying to save for chinchas so we kept them for the pilgrims in our room. There aren’t many girls clothes for the chincha regime. Interestingly it seems mostly only men leave clothes behind.

We also went to the copy shop and bought signs to clarify entry and emergency exits from the printing shop. When we went home we stuck them up. We felt as though we had improved the place. Pilgrims were always confused! 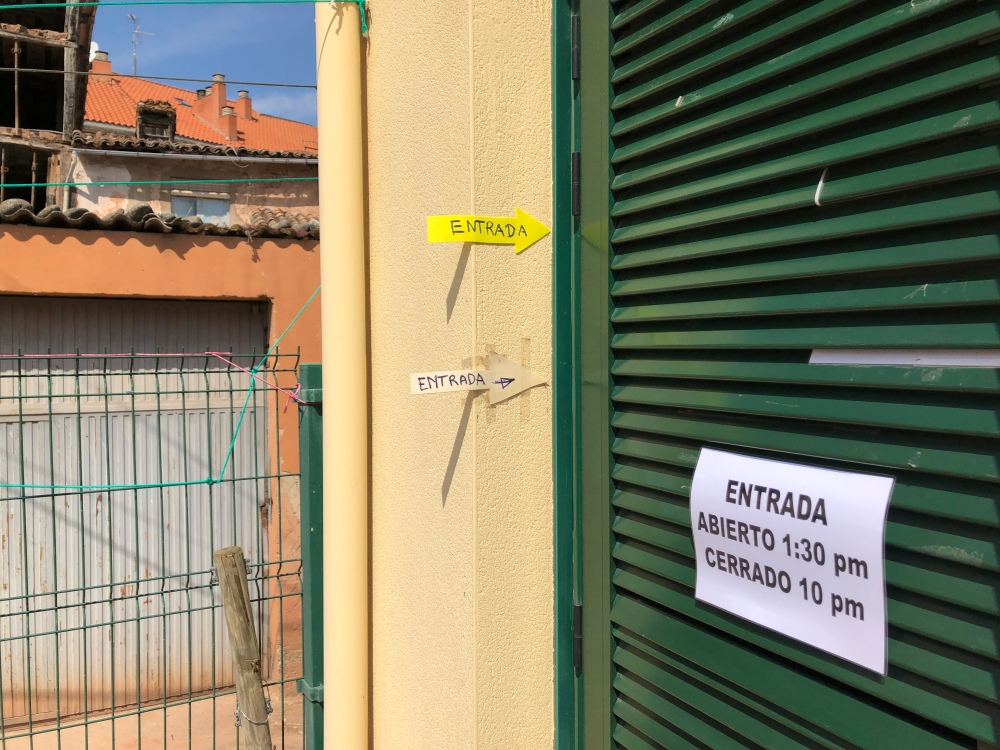 We had a snack of corn chips and hummous and opened the door at 1.30pm with water and melon. There was only about 10 people waiting.

Mavis and one of us go outside and tell the group in English and spanish that we are volunteers and we close at 10pm and we ask them to help us by cleaning up after themselves. I usually sign the first rush of people in – I am bilingual remember! After the first few pilgrims arrived we noticed that there was blood on the floor in the laundry. I found the injured warrior wandering the aisle in the dormitory and asked if he needed help. No I’m fine he said! It’s no problem. I think he needed help!

Maybe you guys could be the judge of that! Will be a grand walk for the next 600kms like this!

Actually that was only one heel he had another heel just as bad! Yep I’ve seen worse but it looks well on the way to trouble!

It was getting close to the end of our stay so we made point of going to the piscina again. I know I’ve told you this is a fantastic pool. It really is a fantastic 4 or 5 pools as there are two giant children’s pools and an indoor pool complex behind. A spa and a gym. Unfortunately the indoor pools dont open until next week!

After this brief reprieve a couple of people needed ice again and we were pleased to welcome another Aussie- a second from Tasmania! Only a handful have arrived in the last two weeks so it’s always nice to greet a fellow countryman with a “g’day mate!” I hope they like it too!

Zebra and I finally had a Tim tam each while Mavis was out relaxing by the river.

A couple with two young children arrived today with a hiking pram! No wonder the children were so filled with energy! Not a bad idea really. The little 4 year old the other day had to walk!

After dinner we arrived back to chaos again. Mavis is militant with cleaning and chincha control but has no interest in closing the kitchen on time. We chased people in to clean up, chased them to get their laundry and chased them in to bed! Many people tell us that this is the most comfortable albergue they have stayed now. The air con is set to auto at 22 at night. We have adjusted the vents to blow sideways. Most people are quiet because we tell them it is a big room and ask them to tell others to be quiet if anyone is noisy.

Desafortunatemente (for him) tonight a Mexican man decided to shower after 10 when the lights were already out. Then he wanted us to turn the lights back on so he could find his clothes. Zebra was not amused! She sent him to bed in dirty clothes. The night before a young Korean man who had been socialising all afternoon came out at 10 and said I’ve been asleep I need to get dinner! It was Zebra’s pumpkin hour – he went to bed very quickly and very hungry! Mavis was already in bed!

I had turned the lights out and locked the door and I sat quietly in the corner.

We laughed a lot today (as usual).

Every night I tell someone something my Nana used to say “Good night, sleep tight, dont let the bed bugs bite.”

Never really knew what they were until my first camino – but now I know even the grandest hotels can have them! But not this albergue!!!!!