I woke in my disappointing hotel room early and heard the swish of tyres against water outside on the street. I knew it might be a little wet again. I popped downstairs and grabbed my packed lunch. It was impressive to say the least! A ham and cheese triple decker sandwich an orange a banana and a bottle of water. How magnificent for my spa hotel! As you might imagine I didnt eat it all. I saved most of the sandwich for later. I ate a piece of bread a piece of cheese and a piece of ham and readied myself for the day. 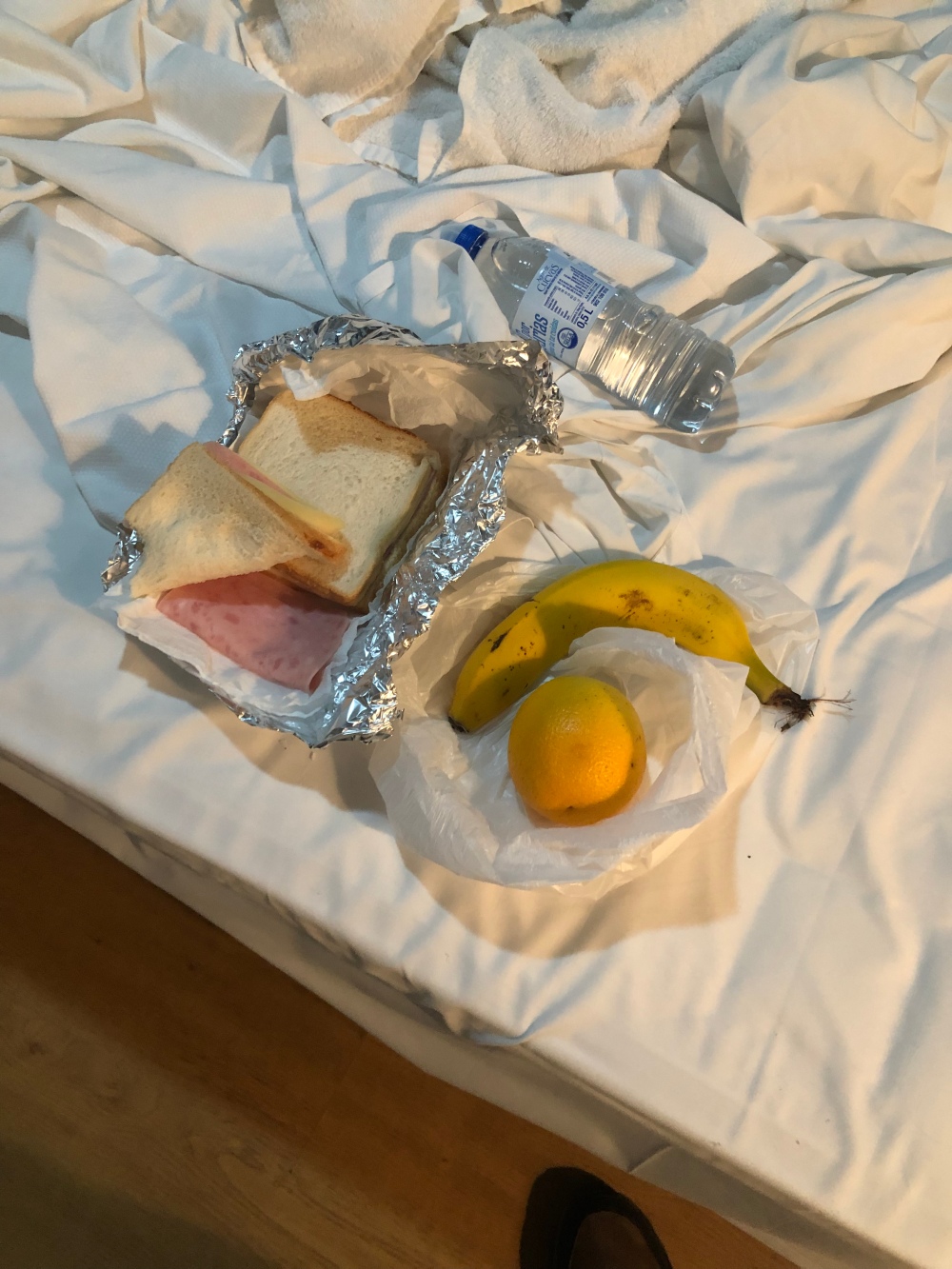 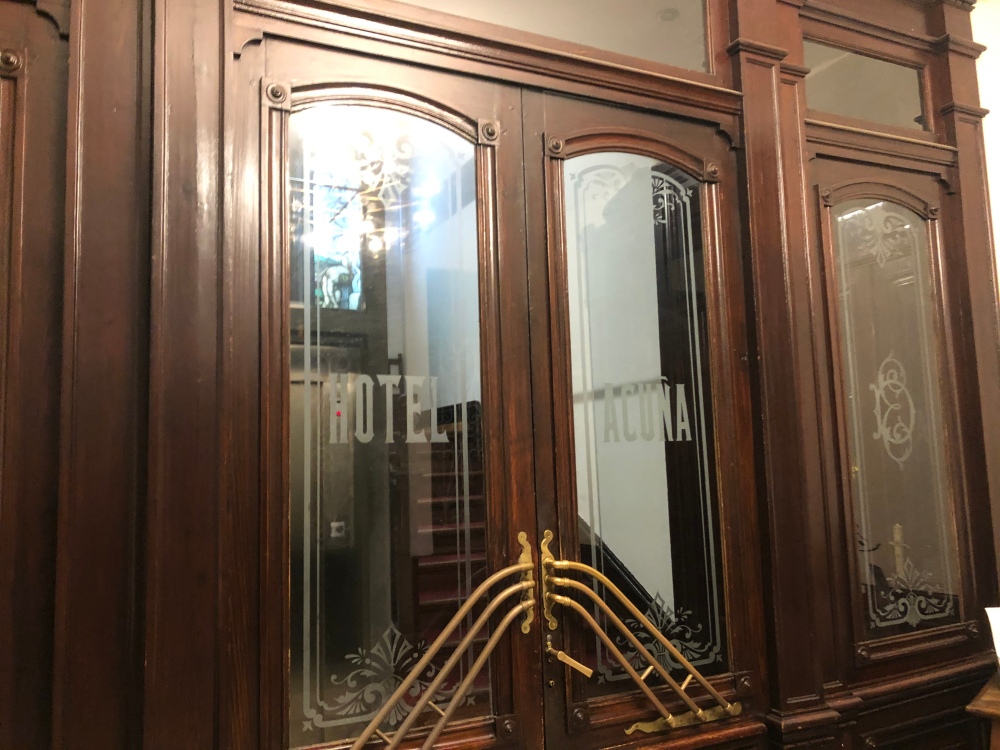 I headed out into the dark street soaked in rain about 6.30am and crossed the bridge into the pueblo. I thought I might encounter more pilgrims at this hour but I was it as I meandered around the streets of the old town. When I reached the outskirts and the start of the forest I was looking forward into blackness. I tried to call my beloved back home so I would have some company in the dark but at that very minute two Polish pilgrims came along and I asked if I could walk with them for a little while. The man didnt speak English but the young woman was very welcoming – then they took off as if they were members of the Polish National long distance walking team.

After I pattered along behind for a minute or two in something that looked like a Benny Hill skit from the 70’s I realised this would not work and I told them to go on as they were much faster than me and at least I knew they were there. Within about 30 seconds I could barely see the pink poncho the girl was wearing, and the light of their headlamps faded into the distance a few seconds later. It was black, wet and miserable. I wanted a taxi. I wanted to go home. I wanted to be anywhere but alone in a dark rainy forest.

I was moving fast in my Adrenalin filled boots as I could see on my app that in about 4 kms Id be out of the that particular forest. But given that I walk about 3 kms an hour that information was not overly reassuring. A few minutes later another headlamp came up behind me – this was a young Italian man and he too disappeared very quickly into the rain. I was pondering whether I should catch a taxi and looking forward to the first opportunity to make the call. Then my final visitor for this forest arrived rather strangely. A Portuguese man with poncho and pack but no torch – I asked him why and he said its better this way. Off he went into the dark and my head torch lit his way for a few seconds. It then kept looking sideways to see where he had gone!

I finally reached the road and the first cafe of the day. There was no way I was walking past this one. No sooner was I inside peeling off my pack and wet coat than my sister rang. I was breathless and desperate for a bathroom and a coffee so I said later when I have my breath. I ordered cafe con leche and tortilla patata and sat drenched in my seat. 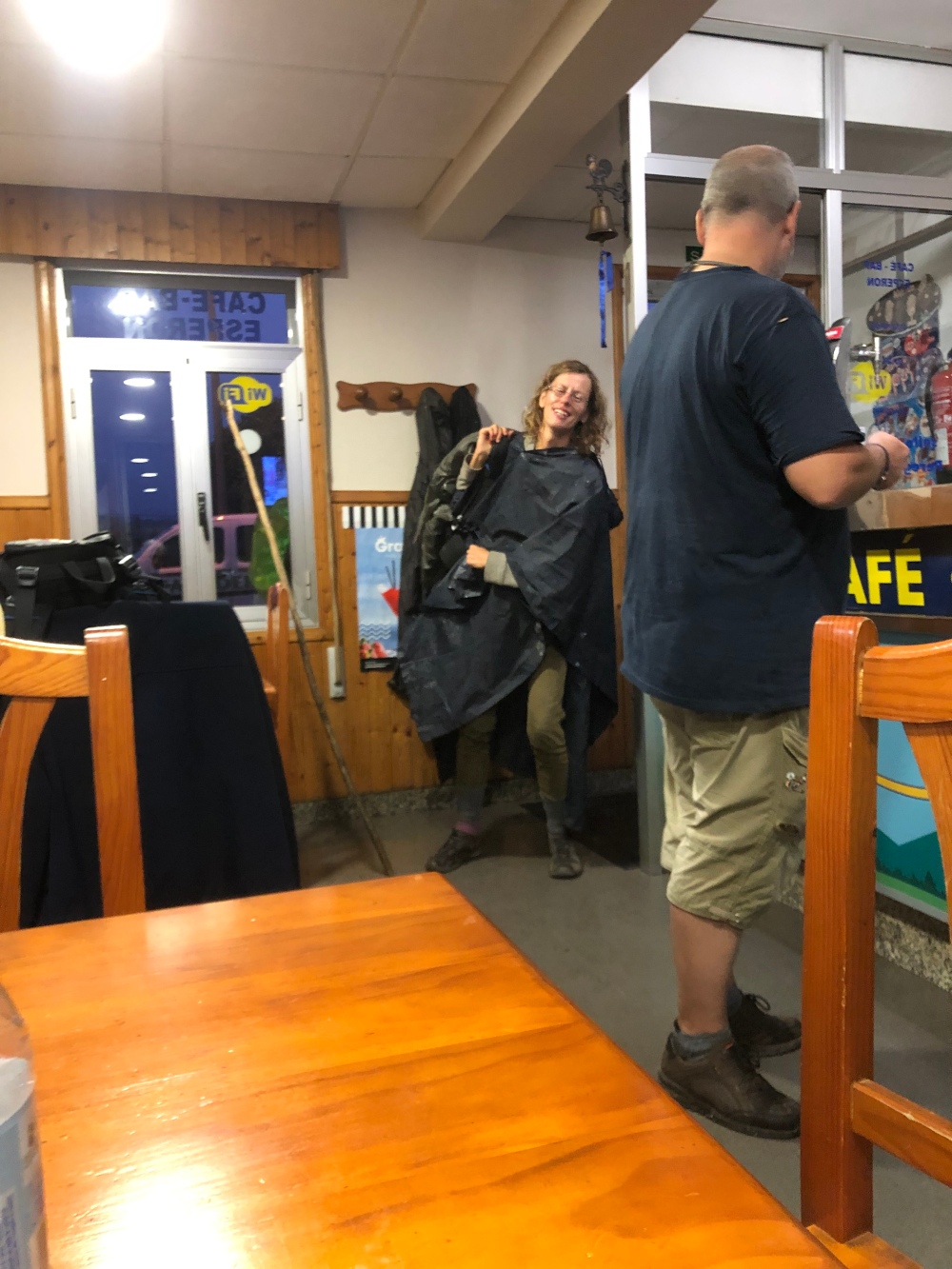 I tried to call my sister back but she had gone. At my table was the Italian man and he laughed as he told me the inside of his poncho was wetter than the outside. Glad I didnt waste my money on a poncho to throw over my coat. A girl was packing up her tent and saying she would sleep in an albergue tonight for the first time in a week. I sat and enjoyed my coffee and tortilla potato and decided to walk a bit further. 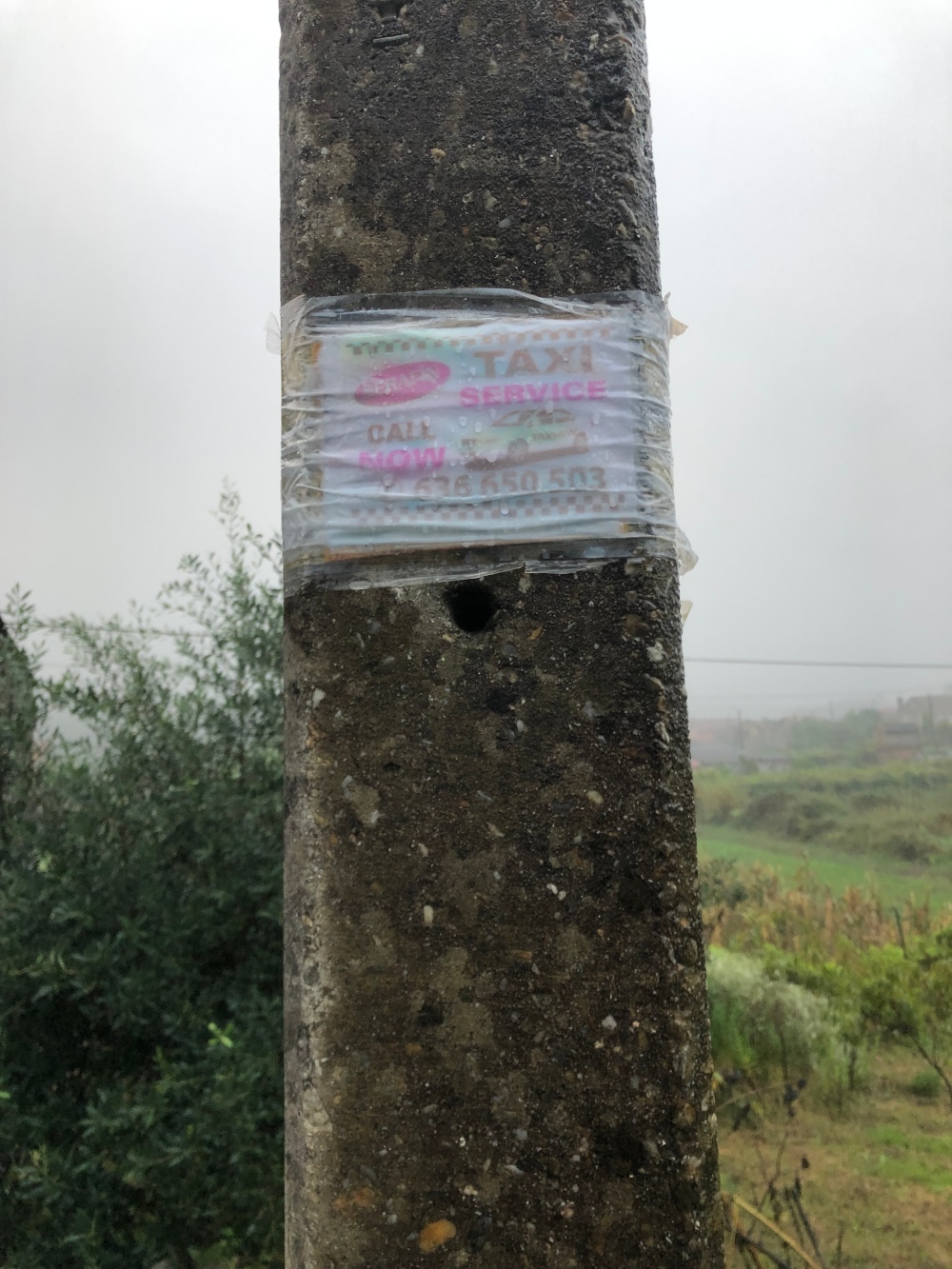 While i was in the cafe daylight had arrived around 8am. I had just taken the number of the taxi off a pole when I turned the corner and saw a small kindergarten that had just started classes. Zebra had mentioned a school around here but I wasn’t sure why I needed to visit. Before I knew it the teacher was hanging his head out the window and telling me how every child has a small koala to clip to their hats and that Australians drop in and sing. The rain was tumbling down so I didnt want to ask to come in (nor did I want to sing home among the gumtrees and traumatise the children) so I took his photo and headed off with a spring in my step and a renewed love for the camino. The taxi number would stay in my phone even though the rain continued to tumble down. 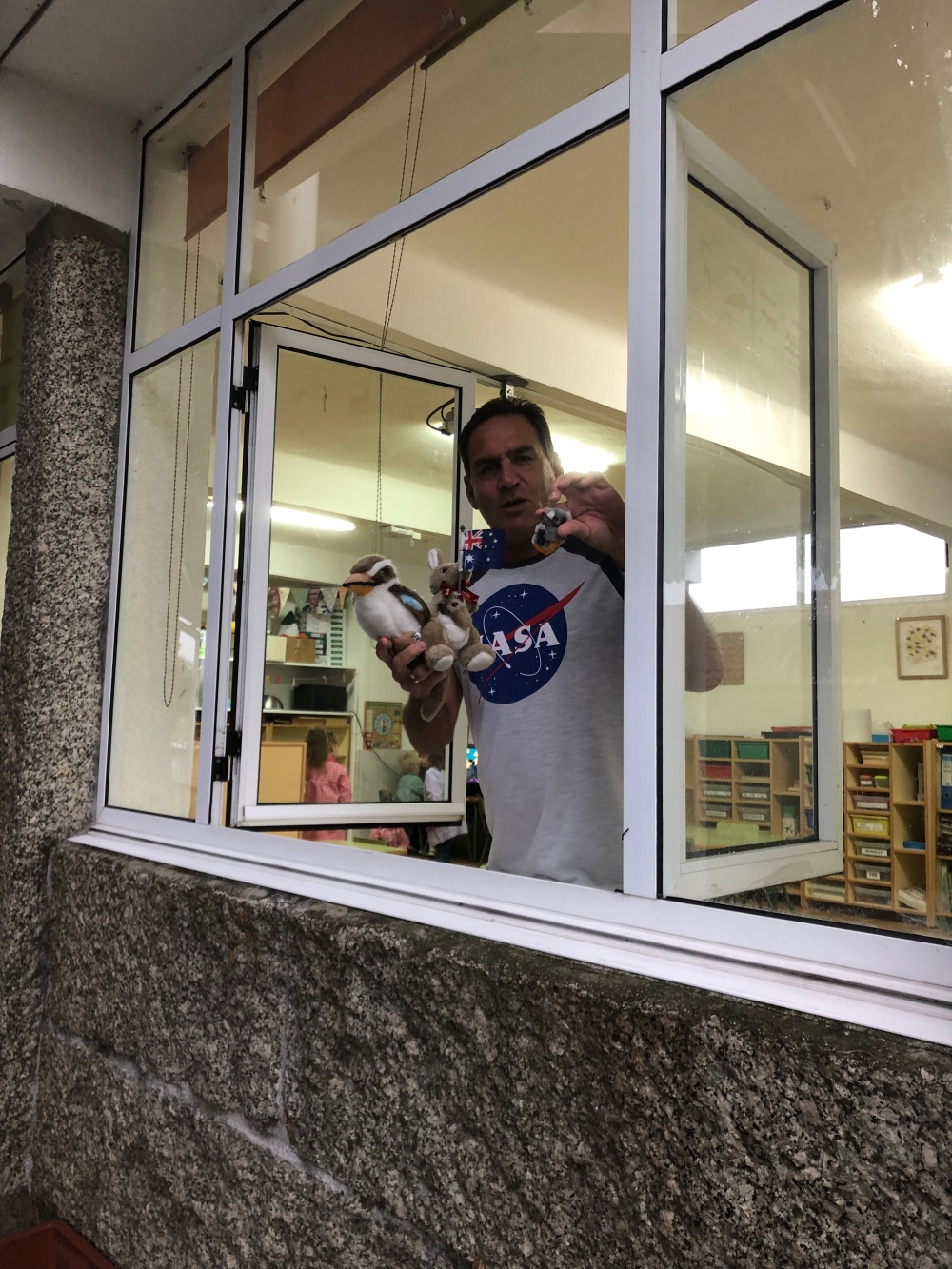 I wandered on and had a photo with an Italian man who I had kept bumping into and a nice lady who was delivering some vegetables to a friend. It rained the whole way and my boots were getting wet inside again! 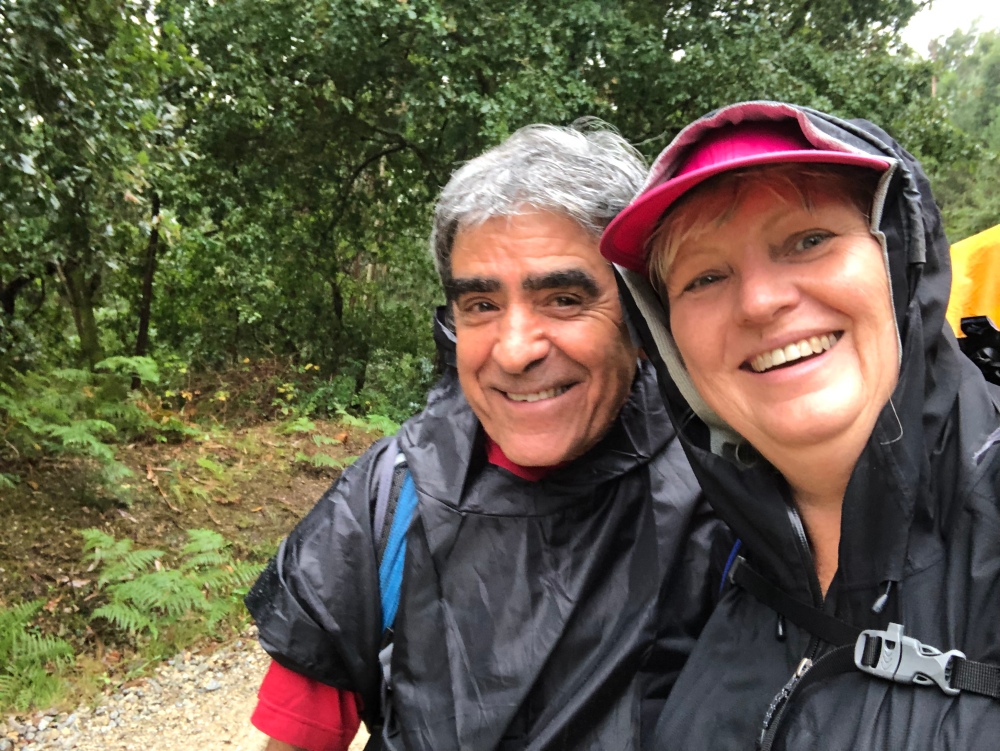 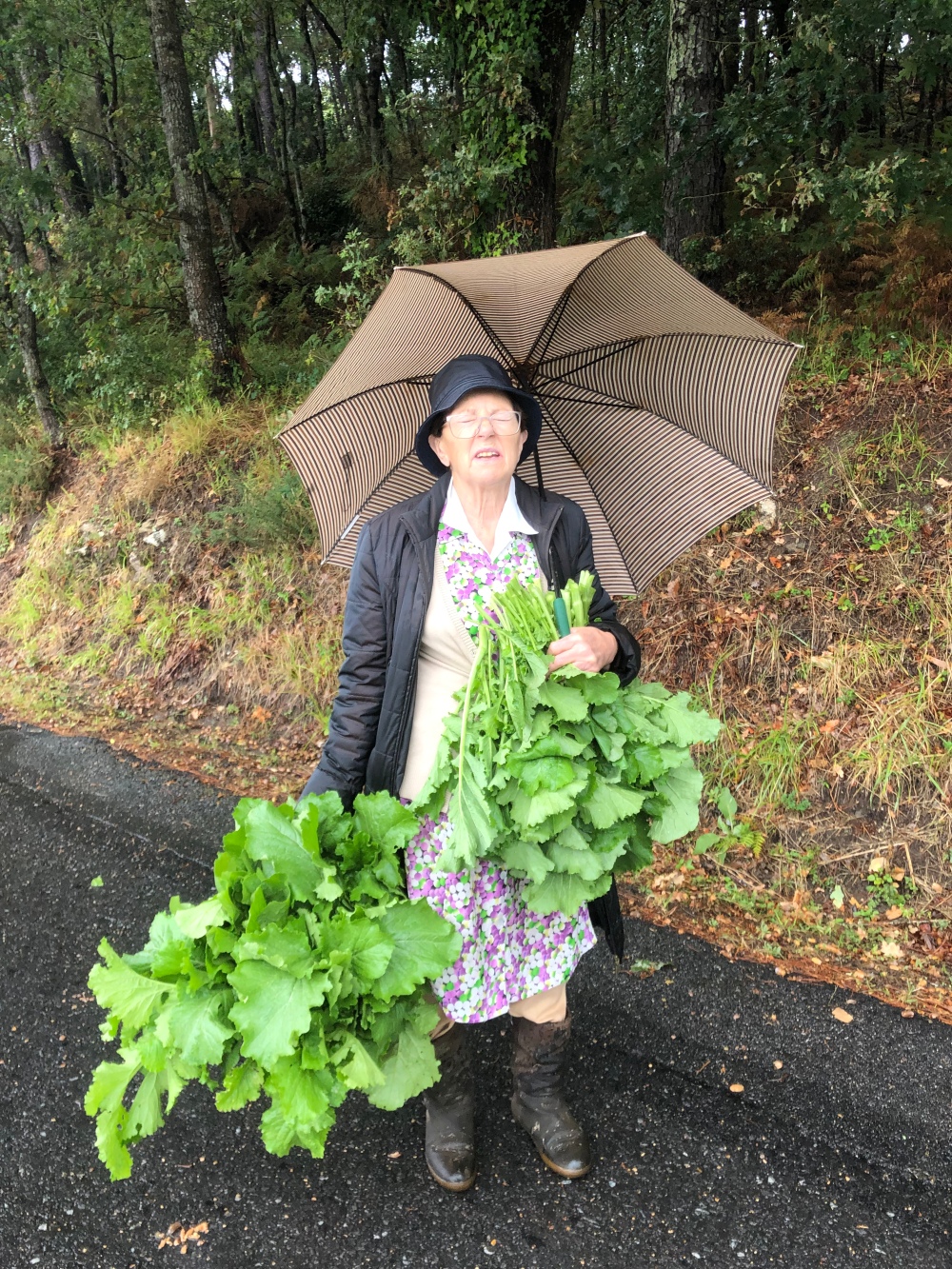 I eventually made it to Padrón a little before 1pm which is when the albergue opens. I wandered around town and had a quick look at the buildings but didnt even see the cathedral before I made the albergue and there I stayed for a few hours. 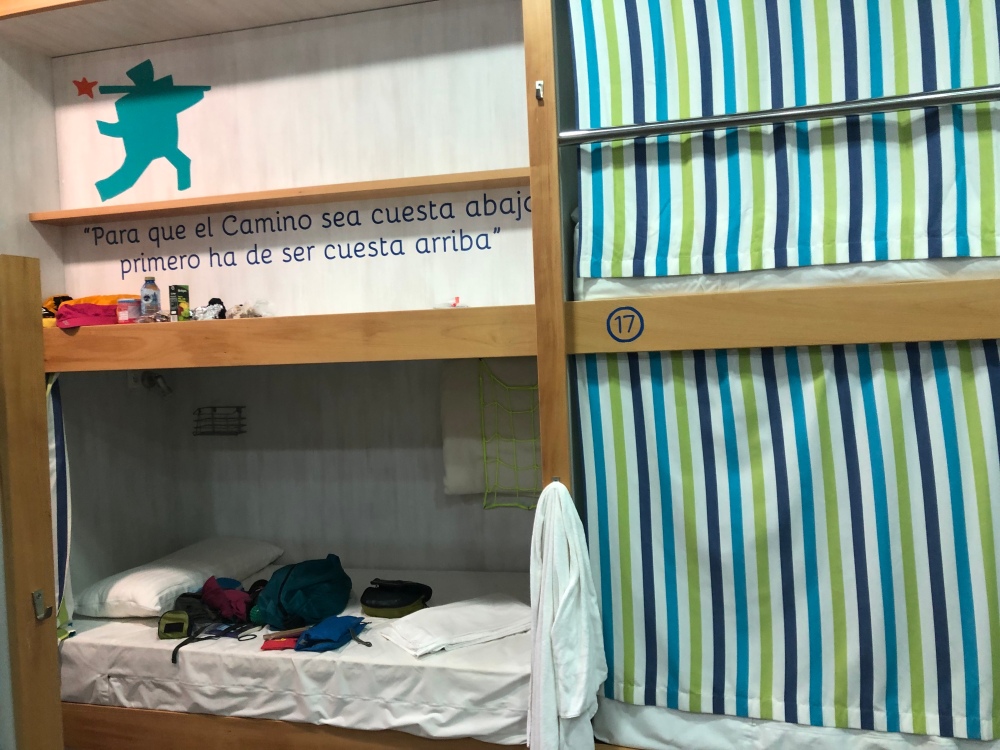 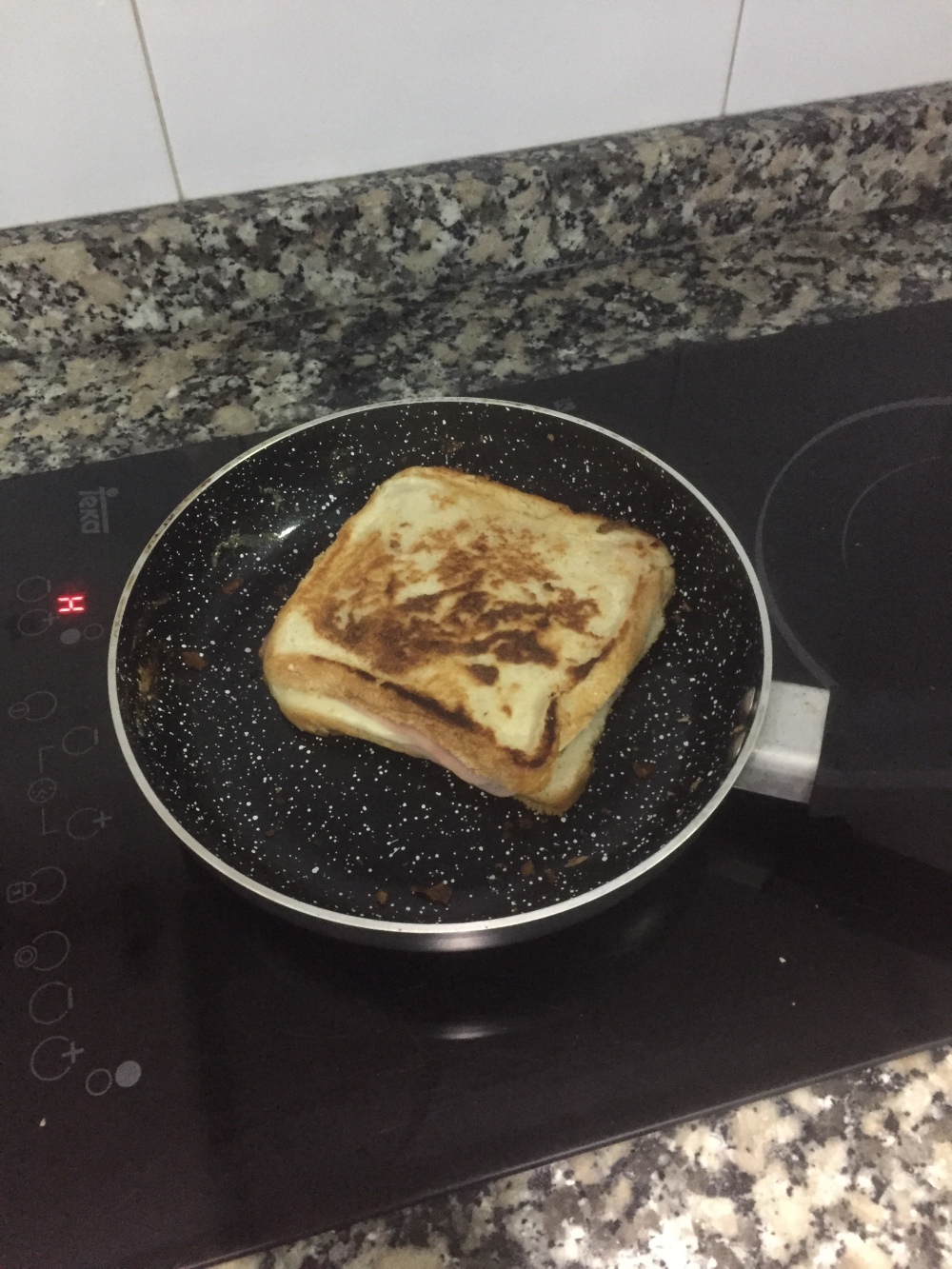 They washed my clothes, dried my boots and gave me clean sheets and a towel. It was like a hotel! I cooked my breakfast sandwich on the stovetop and soon The Other Young Danes arrived and after my clean clothes returned I threw my shorts in with their clothes so almost everything was spotless for my arrival again in Santiago in a day or two. I went outside and the sun was actually shining! I couldn’t believe it. I had walked all day in the rain.

We went for a walk around town filling in time before the kitchens opened and landed at a great bar recommended by our albergue. 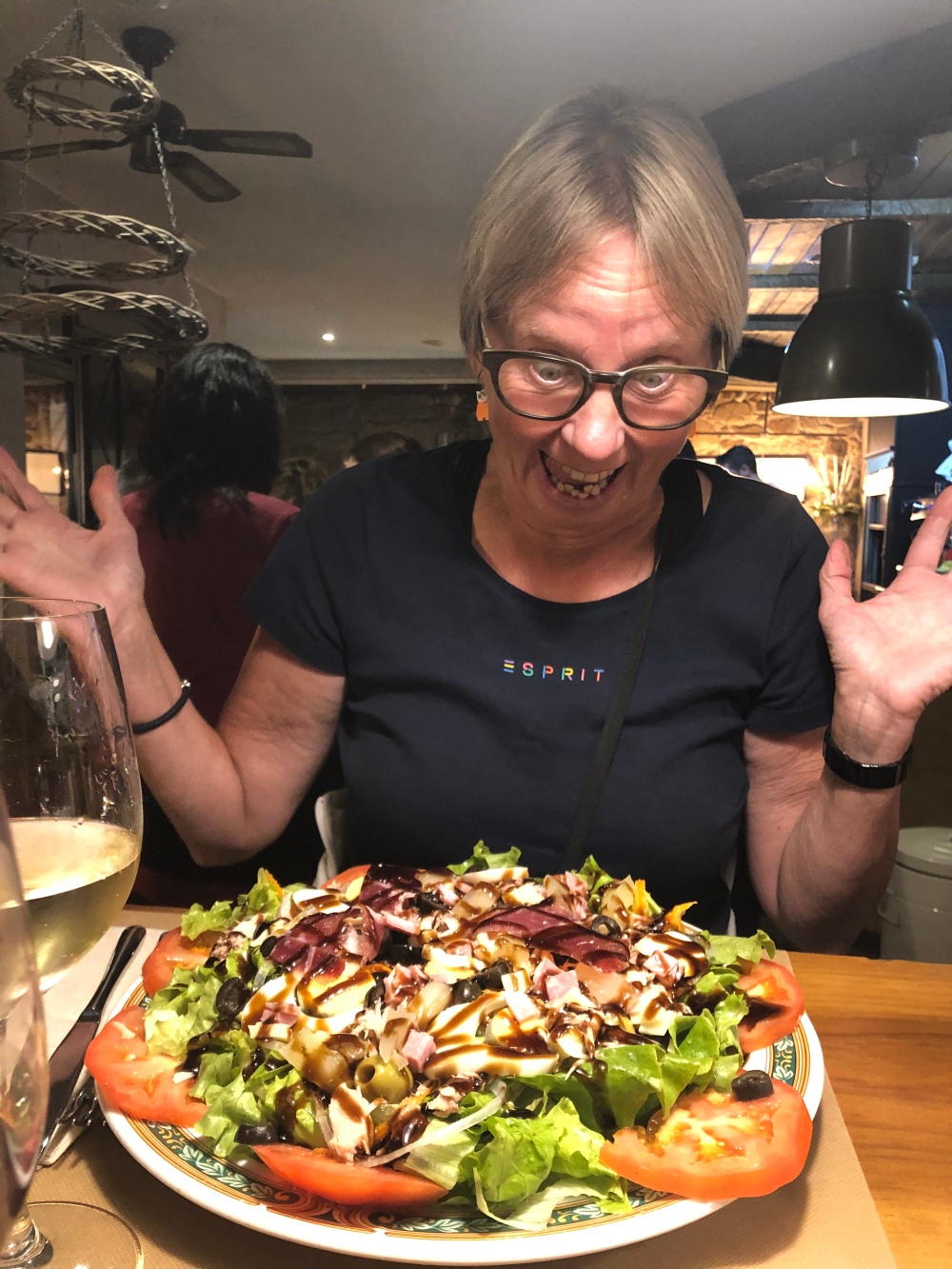 We sat next to the New Zealanders we had lost a few days back and had a magnificent meal fit for a king with vegetables coming out of our ears! And I ate my first Scallops of this camino. 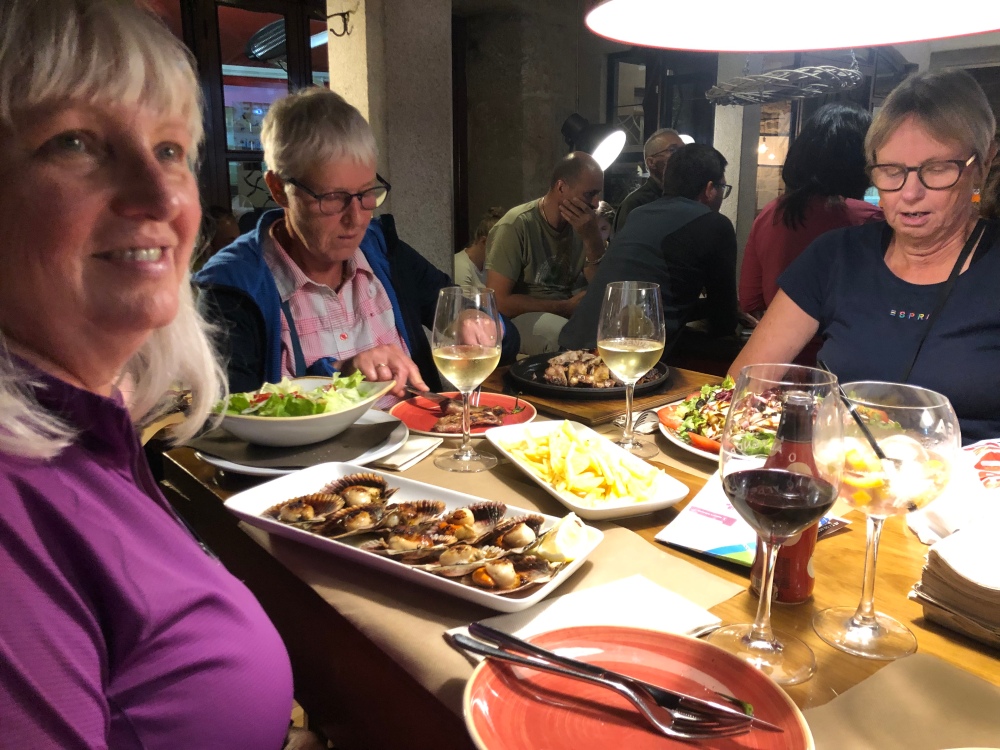 Yep all was well with the world again. Only 25kms out from Santiago – but tomorrow I would only walk 10ks so I could rest in a room away from the masses!