Just a few days ago I indicated to you that we were limiting our distances so we could enjoy the last few days and arrive in Santiago in one piece. I also indicated it was much easier now that the weather was cooler, the paths were easier, there was more shade.

And then we left Salceda!

What the hell happened? How did we get this last full day so wrong? I had booked us into a Casa Rural only 8 k’s out from Santiago. One book said 16km but another suggested 18. Trust me the extra 1.26 is a big deal when another damned heat wave hits – we ended up walking 19.26km. Friends who had started with us in the Pyrenees had posted photos of arriving in cool weather – I think some had even arrived to Santiago in rain. Had we really straggled too long?

The first few kilometres of the morning saw an influx of pilgrims – in fact it seemed as though there were crowds. We stopped at the first cafe bar for a bite and ended up only having coffee and tea. It was too busy and too complicated to order more. Michelle and JC popped in – they had a bit of a sleep in but as usual, were quickly able to catch up with us. 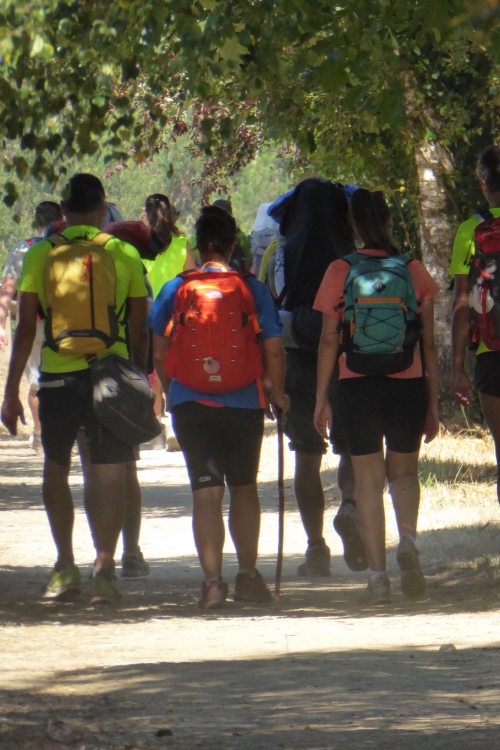 We headed off again, saw some great horses taking pilgrims along for a ride and then bumped into the Americans we had last seen a few days ago when I took their photo walking out of the mist from Eirexe. We chatted for a while and parted ways in O Pedrouzo where they were staying the night. We stopped a short way up the road and had a hamburger each (actually my beloved had two) they were on soft bread which didn’t rip my sunburnt lip open like the hard bread we had become used to in Spain.

Not sure if I have mentioned before but I realised my spf lip balm was useless some time back when my lip was first sunburned. I had tried many farmacias to obtain something seriously good for protecting my lips – like good old zinc – but I failed at every turn. I started using spf makeup as a stop gap which I think worked quite well. Not sure if I mentioned before but in Portomarin, which is one day out from Saria, where all the new pilgrims finish their first day, we were so surprised by the lineup at the farmacia that I had to take a photo – all I wanted was something for my lip – they were all limping around with serious day one injuries and there was no hope of even getting into the shop to look, let alone get served before midnight. 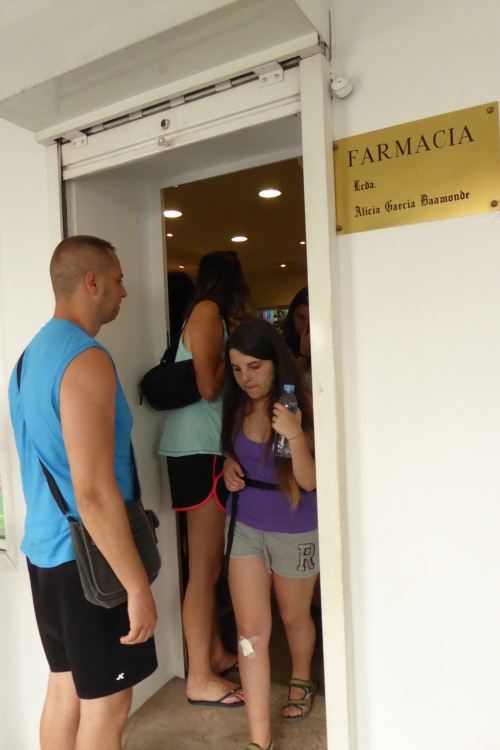 Anyway back to now. We had left late because my beloved needed a sleepin after our catch up with old friends last night. This didn’t bother us too much because the weather had been quite mild and the distance we were to travel was not quite great. But the day heated up very quickly. Husband crawled past the 20km sign and we still had 12 kilometres to go. It was going to be a long day… 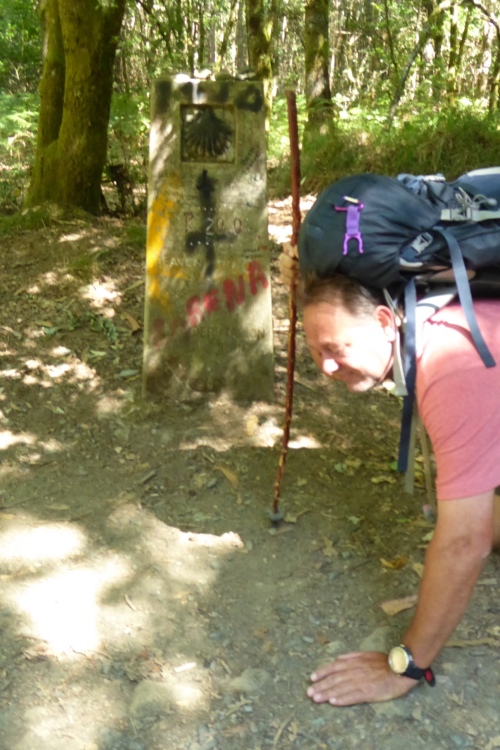 We passed another reminder that life is short – both on and after the Camino.

When we reached sealed roads we noticed the tar was bubbling quite severely. At one point I tried to capture the rippled effect of heat rising on the path head. I’m not sure that I adequately captured the reality. 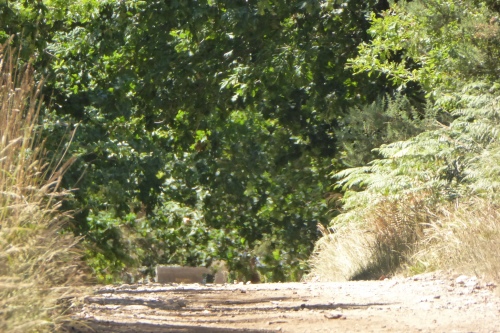 I did finally get to dip my feet in another creek and the cooldown was magnificent and immediate.

Note the Kinsiology tape that has become my knees’ best friend!
I am not sure that I can adequately explain the last 5 or 8 kilometres of the day. There was a completely unnecessary ascent in scorching heat. It was so uncomfortable for me (probably because I was finally moving at the speed of “normal” people), that at the top, I darn near collapsed from heat exhaustion myself. I sat appropriately at the foot of the Santiago sign and caught my breath. We were entering the city limits and I was all but collapsing!

Finally another 4 kilometres later we reached a water fountain and we both thoroughly wet our heads under the tap (remember the trough is for the animals!) We were then able to soldier on another few kilometres – yes I had it wrong – I think we travelled about 8 kilometres during the time I thought we would be there any minute. But hey, we made it to our last night on the Camino – we are only 8 kilometres out from the city – we have eaten dinner and showered. Had dinner with the Aussies we met last night. I can still walk. Husband does not have heat stroke. We are almost there. What a day! 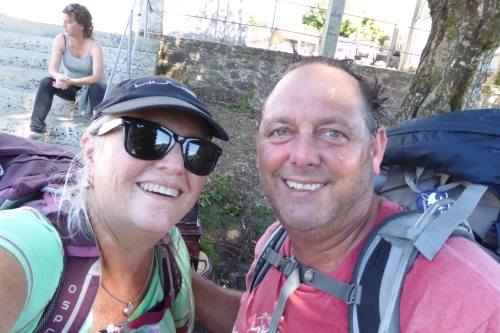