Well the first day after we arrived in Santiago started with a fantastic buffet breakfast at the Hotel and a quick trip up the hill to visit Morgan Morgan Chris and Tim. You remember the American students who we adopted after bumping into them in so many albergues and bars don’t you? I think we first met them when we last saw Anthony and Martin and Jacob from Bilbao at Carrion de las Condes. Anyway then we ended up hanging out for a few drinks in Leon before bumping into them at Jesus’s place, Astorga and finally bidding them farewell at Rabanol.

We then headed down to the markets which is always an interesting place to discover how the locals eat. Of particular interest to us was the way most of the crustaceans were sold live. We usually buy our prawns and crabs quite dead I believe (although my beloved husband has been known to catch the odd crab from time to time henceforth then they are alive). The lobsters for some reason deserve the right to live the longest at home often being sold from the tank at the restaurant. How these ladies in Santiago survive all the claws and jumping out of the plastic containers is beyond me. 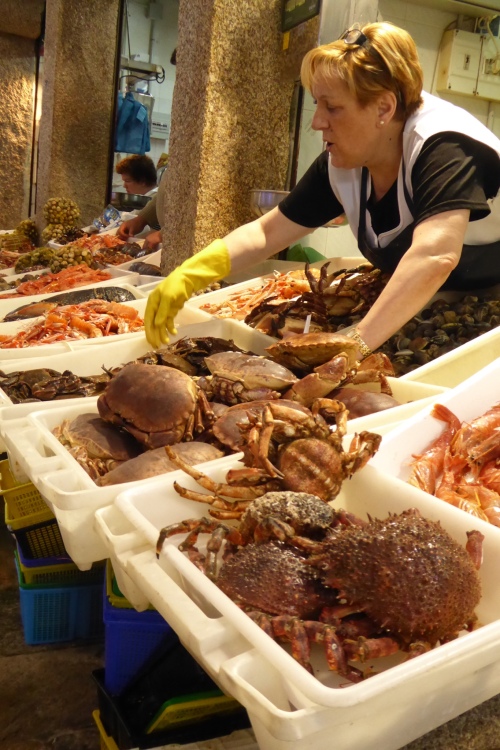 One of our Japanese friends was still hanging about!
Anyway a few of the people we had met on the Camino were still hanging around and it was a great thrill to catch up and say goodbye. As you can imagine most people had packed up weeks ago and gone back to work whilst we kept plodding along. I will say in our defence many were on tight schedules and had to catch buses to meet flights. We were so thrilled to catch Shirley and Steve before their departure, Mike and Gilda and Michelle and Chris have stayed in touch on Facebook, Jacob from Bilbao has gone to help his Mum move to Madrid, Anthony and Marten stayed back to rest Marten’s hooves and we eagerly await news of their grand entrance to the square in front of the Cathedral, I don’t know what happened to the Englishman Dave with the Red Ankles, he could be still walking somewhere for all I know, Janice I’m sure has her feet up at home and is sitting back looking nice and relaxed and Pepe, well maybe he was just a Camino angel and never actually walked with me at all!
Michelle and JC however, they will always be with us. We kept catching up over the two days in Santiago and again in Finisterre where I finally managed to dip my whole body in the ocean again. We headed to Muxia first and then to the beachside ablergue do mare at Finisterre. Muxia is where two stone boats are believed to have arrived if I have it right. One was the Angels bringing Santiago (Saint James) to the Spanish shores and one was Mary asking permission. It is a beautiful little place where many pilgrims flock to after the Camino along with a visit to the beach and Finisterre. I was more thrilled to hit the beach at Finisterre than you could imagine. Having spent my youth on the beaches at Coffs Harbour I believe there is something truly soothing to the soul swimming, and sometimes just sitting and watching the waves roll in. There is not a swimming pool on earth that can even come close to a dip in the ocean and when I dived in the freezing water I finally felt totally at peace after our journey.
Finisterre is Latin for the end of the earth. In the old days people thought the ships sailed over the horizon and fell off into the abyss. We know better and thoroughly enjoyed the most beautiful view from our albergue, and of the sunset at the lighthouse; and a wonderful day of beach and wandering. 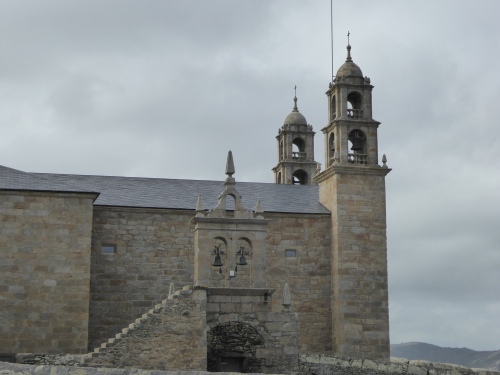 We caught up with some friends which of course included Michelle and JC but also Anna Adam and Lilly from Canada. 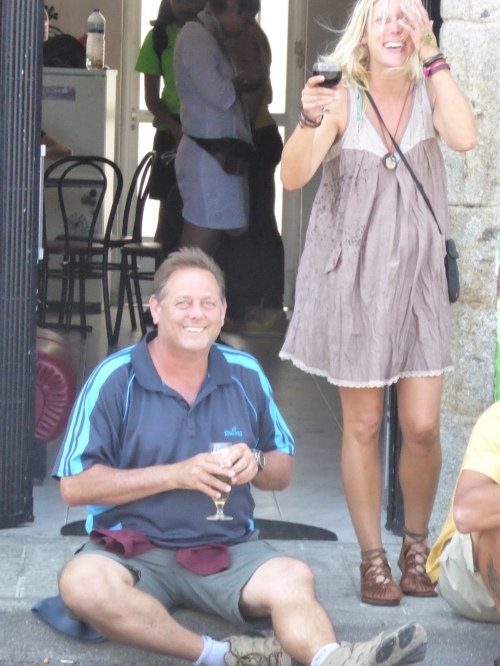 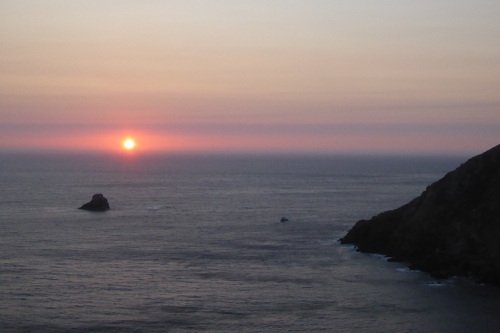 Before leaving the next morning I zoomed in on a few beach campers from our Albergue and felt sure that was the last we would see of Michelle and JC. 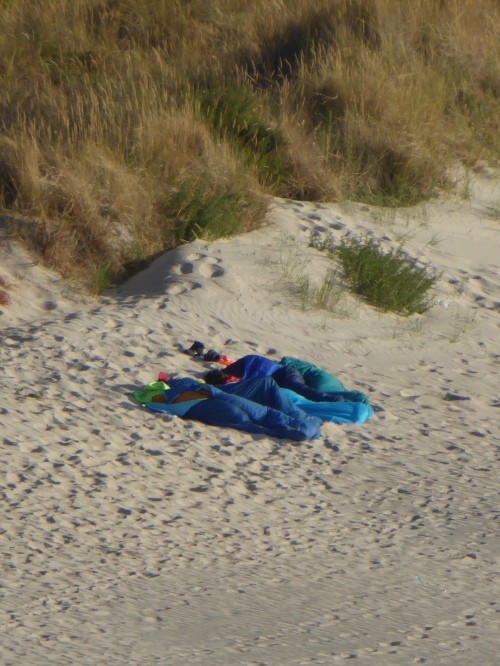 At the statue outside our albergue Husband left the stick that had been his companion for much of the camino. I actually felt a bit sad but it seemed like the appropriate place.

We headed down to the bus stop with barely minutes to spare and as we threw our packs in the hold Michelle and JC came running across the road to say goodbye. The tears are flowing again as I write this post. We never really planned to run into each other so much but their 53km hike to catch up to us that day put them in a special place in our hearts. Michelle was crying too, JC was silent, “Its really over isn’t it” I said or asked or whatever. Yep we jumped on the bus and headed back to Santiago and managed to grab the next bus out to Porto in Portugal. The Camino was really over now but a new adventure was about to begin!

Michelle and JC heading off