It was exciting leaving Roncesvalles this morning. It was dark, cool, there was a buzz in the air because many pilgrims actually start the journey here – In addition I was pain free! We passed our friends in hallways and bathrooms and visited the boot room to find our feet and get on our way. I grabbed a coffee for 80c from the machine and ate my banana for pre breakfast as we headed out. Just when we were walking through the arch out past the church we spotted the Irish spy and managed one last photo before she sped off down the track leaving us for dust! After arriving in Orrison some spy investigations revealed that the French taxi driver was happily married with three children so that is where that story ends.

Leaving Roncesvalles you pass through a dark forest that I’m sure bandits would have enjoyed a few centuries ago, we could have done with our headlamps at this point although it was almost 7.30 am but it was actually light by the time we exited the trees so it was only a short time in the dark.

We passed our new friend Moune who was eating breakfast at the first cafe and she caught up as we strolled along slowly. At this point we stumbled across a lovely sun flower garden which I was pleased to see. Also spotted a great idea for recycling jeans. This was different to a spring camino because earlier in the year poppies are everywhere – clearly we are destined for some nice surprises! 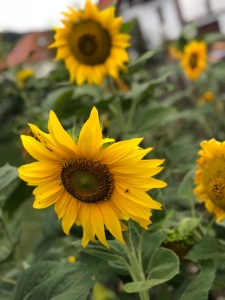 We finally found a bar to stop for breakfast just as the heavy rain began. The Brazilian Diplomat and an Irish Yoga Guru were in there stocking up on carbs to keep their energy levels up so we joined them for first breakfast. The rain certainly came tumbling down for a while after this and we all donned our wet weather gear.

Desafortunatemente my pack cover had been over worked in the past and I soon discovered the waterproofing was no more! Luckily the pack itself still had some water repellant properties and most things were in another bag as well. Fortunately the rain eventually eased up and I didn’t need to stop anywhere to avoid disaster.

We knew today was going to be tough. It seems an ongoing misconception has passed down through the ages that once over the Pyrenees it all gets easier – but we knew better! The trip from Roncesvalles to Zubiri is a day to remember. It’s where I lost my vocabulary last time remember?

Anyway we stopped for second breakfast (as you do) and there were our friends again ensuring their energy levels were maintained. It was here I discovered that Tash was actually an Irish yoga guru! However she also benefited from Australian Stretching instructions from the Brazilian Diplomat to help manage those long descents!

I was so thrilled to go bounding up the hill to Alto de Erro past Linzoain. It’s exactly where I lost my vocabulary last time. This time I could not believe how easy it was!

Well, actually it wasn’t easy, it was damned tough. My beloved can attest to that. He was faltering again and could not believe it each time I passed him. We were neck and neck. It just wasn’t anywhere near as painful as I remembered it. I will say however that the decent into Zubiri is not for the faint hearted. The razor sharp rocks would slice a foot in two. Those who walk in less protective footwear must find it a real challenge managing this decent. I was not able to find a picture that adequately shows the level of difficulty here. Suffice to say it was steep and never ending!

At first breakfast we called ahead to Albergue Susiea in zubiri and managed to book a bunk each. It was 450m away from the centre – in the opposite direction to the Camino. Let’s just say that’s an unnecessary 450m so As we came into Zubiri we both discussed stopping sooner at one of the Alburgues closer to town.

I know it sounds crazy – 450m is only half a kilometre right? Don’t worry we didn’t bail out. Thank heavens we didnt! As soon as we arrived we spotted our Italian room mates from Orisson along with our Irish, American and Australian friends.

We were put in a room with a great Canadian couple who kindly left us some space when we arrived as they were already showered. We cleaned up and showered ready to enjoy the ambience.

It was sometime during the afternoon I noticed the few aches I had were developing into something a little concerning. Anyway we had a lovely meal and the lady washed and dried our clothes for a couple of euro and I managed to relax here and there in the reclining leather lounge seats unheard of in albergues!

The night however was not as relaxing as it could have been for me. Whilst my beloved slumbered peacefully after enjoying another evening of fine company beer and wine, a fever seemed to be taking over me. My feet were fine but my body was aching. I tossed and turned listening to a fiesta in the not too distant village eventually managing a few hours rest. Pamplona beckons!