Don’t worry! It’s a tiny little blister on my left big toe. It’s the sore knees that are more of a concern! We bought injinji toe socks for my beloved when we were in Pamplona and they seem to be working for him but my feet are different. You remember don’t you? I inherited my Irish grandmothers feet – not her accent!

Anyway it was quite cool for the start of the day and we were looking forward to wandering through vineyards. The plan was to make our own breakfast with ham, cheese and tomato toasted sandwiches. I even had an avocado that I’d been carrying since puente la Reina. We were going to make full use the kitchen to cook toast and boil the kettle. But guess what? No toaster, no kettle and the avocado still wasn’t ripe. Speedy gonazales suggested it was time to name the avocado. He was becoming a permanent friend.

So, don’t tell anyone but I have christened him Alberto. He will one day give his life for a meal.

Well we heated water in the only available appliance which was the microwave. Had cappuccino sachets and tea bags. Made a sandwich each for first breakfast and a half each para llevar (to take away) for second breakfast. We managed to leave at 6.20 so it was still very dark and the whole town was asleep save for the people in the room right next to ours. This, as it turns out, was a stroke of luck because no sooner had we checked everyone had everything and shut the door quietly to head off on our way, then speedy discovered her hands were empty. The poles were still inside next to the bench behind the door. The door that was now locked!

In a bout of enthusiasm the choir master pushed the door buzzer which must have been disturbing for the hospitalarios yet they did not answer. But then a few well directed words to the room upstairs next to ours resulted in success. The kind lady came down stairs and opened the door. Success! We were on our way. Often we aren’t so lucky retrieving things left behind. No one wants to walk back 20kms!

We reached the detour to Ventosa as the sun was rising and had a brief conversation with the Town Planner from Broome before we all headed down the hypotenuse, avoiding ventosa. We stopped at a small rest area just before the hypotenuse rejoined the path from Ventosa. 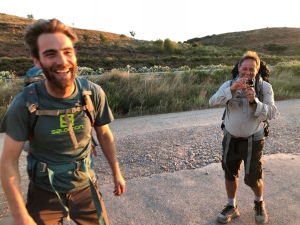 The Canadian from South Africa, whom we had seen in Navarette the night before eating dinner with the planner from Broome, also came along a little while later. Mighty Mouse from Hungary, came speeding past and then stopped and sped past a number of times before meeting at the same cafe as us for third breakfast in Najera.

On the road coming down the hill into Nájera my left knee started hurting and i started going particularly slow. It wasn’t swelling though. This was the one I’d had surgery on before. Then just as we arrived the right knee started swelling.

We saw a heap of people heading into a church as we were passing through Najera and realised there was going to be a wedding. Unfortunately we couldn’t hang around to watch because it was starting to get really hot again – hence we sped off up the hill to Azofra. This stretch of road brought back memories of the dark clouds of Mordor that were threatening us last time.

I was very slow into Nájera but sped up for the last 5 kms into Azofra. Uphills and flat are not my problem. Downhill is always a worry.

Anyway there were no dark clouds today and I was in a speed zone. I was remembering my Irish gurus words “use your stomach muscles”. I’m not sure if it was the muscles or the hunger but either way it was the stomach that saw me speed into Azofra and the magnificent footpool where our Canadian friends sat with feet up and with cold beer just for us. Yep – love those guys! 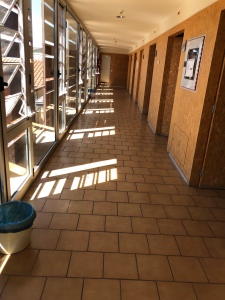 A host of other characters filtered into the albergue as the afternoon wore on. Why not! 8 euro per head and twin rooms with a great social area. We had dinner at the nearest bar which can be described as efficient and edible. 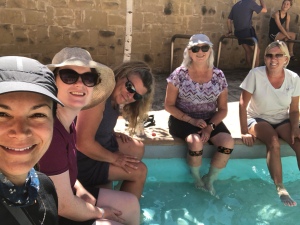 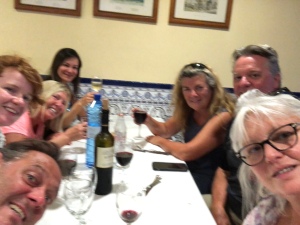 Of particular importance was the lesson we learned regarding Primero and segundo (first and second courses) – the lesson was, as Gerry will attest to, you cannot eat macaroni with your veal! It is not possible!

The waitress had informed us that the macaroni would take ten minutes to cook so he needed to choose something else to have for primero. He said “no problem I’ll have it with the main”. “No you cannot have the macaroni with segundo!” Of course not! What was he thinking?

Having such a social group left my beloved having one or two too many and staying up a little too late – Speedy, the Choirmaster and I went to bed in preparation for our early start por la manana