We were in a nice hotel room last night – La Puebla – nice room nice staff and nice breakfast. Also up a bit late due to a farewell. So we slept in until 6.30am! Woo hoo!

I decided to turn right out of the hotel instead of left so we had a bit of tour before we really got going around 8.30. As you can imagine, my beloved was thrilled with the prospect of some extra sight seeing first up. So much so that he bestowed words of gratitude upon me at each new corner until we finally headed down the street with paved arrows!

As we were passing the back of the cathedral a few people were pulling suitcases with day packs on their backs. One lady asked how far we had walked from and when I told her St Jean in France she was surprised and said I looked great! I said I did a lot of training for this! She saw me at my best – about 3 hours later I was looking like a shattered mess. Last time I was more than once mistaken for a disabled German!

A couple of hours out of Burgos our friends came burning up behind us on their bikes. We wished them well and Buen Caminod them as they rode off into the future. We may see them again but only if they slow down after they hand the bikes in. 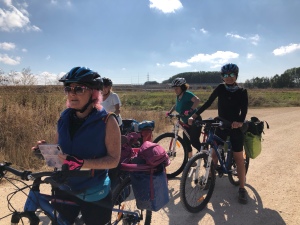 So Speedy was well and truely gone this time and our Choirmaster had stayed behind in Burgos to utilise the sleep facility at the hotel. We were on our own but only for approximately 32 minutes.

At this point we saw a young lady ahead that we had Buen caminoed yesterday when we were at a rest stop coming into Burgos. Wouldn’t you know it – she was irish! We started chatting and kept walking until we realised we had missed an arrow! We did a quick u-turn and a local pointed behind us as he drove past. Then just as we found the missing turn another two pilgrims crossed the street to have a chat. Guess what? They were irish too!

We walked and chatted for a while (mostly about the Irish dive sites and beautiful beaches). Can you believe it? Anyway husband had a rock in his shoe and I needed to take my jumper off so I said we’ll see you in the next town.

We didnt see them – they were way too fast but the girl was staying in the next town so we saw her outside the cafe.

After a couple more villages and couple of blister management stops we started going up the big hill. Well it wasn’t steep but it was never ending. I had taken one of my favourite shots of the camino somewhere on this hill. It was a silhouette of a tree on the horizon. I eventually managed to find it at the very top of that damn hill!

The trip down into the village was painful and long! It was only about 3 kilometres but everyone in our albergue that night complained about it too. I even soaked my feet in cold water they were so sore.

For dinner Omar cooked the absolute best chicken paella ever! We had a small group of germans and a couple of americans but sorely missed all the friends we had enjoyed the first few weeks with!

Husband ducked out and tracked down Jack the dog and his family but I didnt feel right after leaving late, climbing a long hill and arriving late. Anyway I stayed back and rested for a change. We were planning another early start for the morrow!