I wanted to get to Triacastela. I wanted to walk there. But I was in pain and I thought it was all downhill. 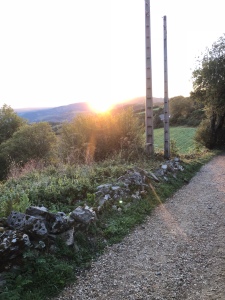 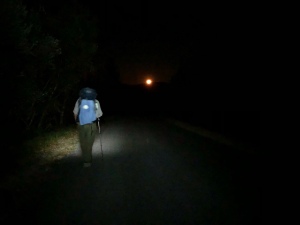 Thankfully I was wrong. Well kind of wrong. And I’m not sure I should be thankful about that. There were a significant number of uphills to begin with but nothing like the last big hurrah coming up to Alto do Poio. Even dogs threw themselves down in despair when they reached the first bar.

But then the downhill began and I was in more pain. The further we walked the worse it got. We passed some cows and bid farewell to the choirmaster before it became debilitating. Felt like a nerve was pinched. 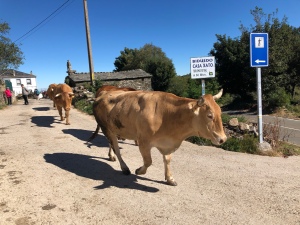 It took two hours to walk about two kilometres. I limped into Fillobol ready for a taxi. But there were it was like an oasis. The bar with the best view on the camino and a habitacion doble in the albergue. Three kms out from Triacastela and it was beautiful. Maybe with rest and food I could walk again tomorrow.

The food was brilliant- so was the view. But the pain lingered. I did my yoga and downed some ibuprofen. My beloved even massaged my back. But I was still in pain. It was difficult to walk a few steps. We went to bed early hoping tomorrow would be better. We wanted to get to Santiago next weekend. Things were looking a little concerning.