My flight out of Dublin was at 6.30am so I was reliably informed that I needed to be at the airport by 4.30am!!! Who was the darn psychopath that organised my travel schedule? Oh, that’s right – it was me!

Well its not like I had to get up that much before 4:30. I was right at the airport and we all know I didnt have much to pack. But still, getting up at 4am just didn’t seem right for my body clock. But get up I did and down at reception I asked to check the luggage room one more time in case someone had slipped my pack in during the night rather than knock on my door and wake me.

The tracking link they had given me in Helsinki hadn’t changed until now. It seems the bag was being directed to Dublin – only problem was I was leaving Dublin! And I told them that yesterday!

So I worked my way through passport control, security and duty free to find myself walking another fifteen kilometres to the Aer Lingus departure gate! No wonder I had to be there so early. Anyway by this time I knew that Helsinki was two hours ahead and the phone customer service line was finally opened. I connected with a nice lady who agreed to stop the bag being sent to Dublin and see if they could send it to Biarritz airport and I could pick it up today. I could have everything in time for my departure on the morrow.

Yep, you thought right! As if that was going to happen. Anyway after much tooing and froing I arrived at Charles de Gaulle airport to be told it was too complicated for them to send luggage through Paris to Biarritz! So they would have to send it to Najera in Spain. Wonderful — they found my hiking gear! Trouble was it was to arrive after I’d been hiking!

I discussed my options with the Irish Boeing engineer who sat next to me on the plane to Paris. He agreed that they should be able to get it sent to Biarritz. But, it seems he knew how to fix planes, or at least stop them breaking down, and he instilled trust in me, but he didnt know much about luggage logistics. Regardless of that fact I am confident the Boeing planes are in good hands. But we were flying with the competition. Airbus! Oh well I’m sure they have reliable engineers as

well. But again I digress!

I arrived at Paris CDG and exited to the bus station as quickly as possible so I could head to Orly and make my connection to Biarritz. It wasn’t that complicated for me to transit so I couldn’t imagine it being too difficult for the bag my backpack was in either. So I searched connections my bag could make for the next 24 hours and sent the flight numbers to my contact at the service line.

Finally it was resolved! My bag would go to Bilbao! Bilbao? What? I’m not even going to Bilbao! Yep that’s the best we can do and then we’ll get it to Najera in a few days. We don’t have an agreement with Biarritz and it might not make it. But…. I’ll have to buy new gear anyway or cancel. Nope sorry cant do it. Send in your claim and explain the situation if you go over the daily limit. That was it.

So my technical hiking gear I had tested and honed to perfection my sleeping gear, my spare clothes! Were not going to make it for my hike over the Pyrenees!

Now I just needed to get to Saint Jean Pied de Port before the pilgrim shop closed so I could buy the necessary supplies to ensure I didnt arrive injured and in pain from carrying gear that didnt fit me.

So I perused the passengers who were getting on my plane in Orly to see if I could spot some hiking boots or backpacks or something with a camino shell who might want to share a taxi. The support groups online say no problem. No need to organise before hand. There’ll be heaps of pilgrims interested. Guess what? No-one! I wanted to share a taxi and get to Saint Jean as soon as possible before the shops closed and I was told the next train would be 8pm. Nope – even in Biarritz airport my beady bushwalking eyes scoured the landscape for another pilgrim. Nope, not a soul!

So I transferred to the train station in Bayonne and confirmed that the next train was three hours away. Note to self – don’t travel in Europe on a Sunday! I circled the railway station like a vulture looking for my catch! I spotted a young girl with a backpack lying on the bench outside. Nope off to Toulouse! Then there was a young girl at the ticket machine and she started typing Saint J – I asked if you she wanted to share a taxi.
“How do you know where I’m going?” She asked concern in her voice. “Well you have a back pack on and you were typing Saint Jean Pied de Port weren’t you?” She wasn’t interested if the train was only 10 euro. The taxi driver quoted me 140!

There was a mother and daughter over the other side of the kiosk. I was a little less enthusiastic when I explained my situation. But the mother said she would have a few hours ago but her circumstances had changed because of her boots. She took off her glasses to reveal a developing black eye and explained her shoes had tripped her and she hit her head on the ground and her feet became tied together so they were now heading home. The bow of the shoe lace is often caught in the other shoes lace catch when the design is just not quite right! I showed her my photos after my fall last year and wished her buen camino!

Then I had an epiphany! That’s what I’m meant to do on the camino isn’t it? I called the pilgrim store and explained my situation and the lady offered to help me even if I arrived a bit late. Of course she did. Sounded like a bloody good sale I did!

Anyway I hung around Bayonne and eventually caught the train at 18:30pm. A fellow sat opposite me looking very relaxed and happy with his backpack and his gear. After a few minutes I asked if he spoke English. ‘Course he did – he was from the Blue Mountains! Another Aussie making his way up the mountains. He offered to lend me a sleep sheet or sleeping bag if all else failed – what a generous offer. But I was confident the lady in St Jean was going to enjoy my visit! 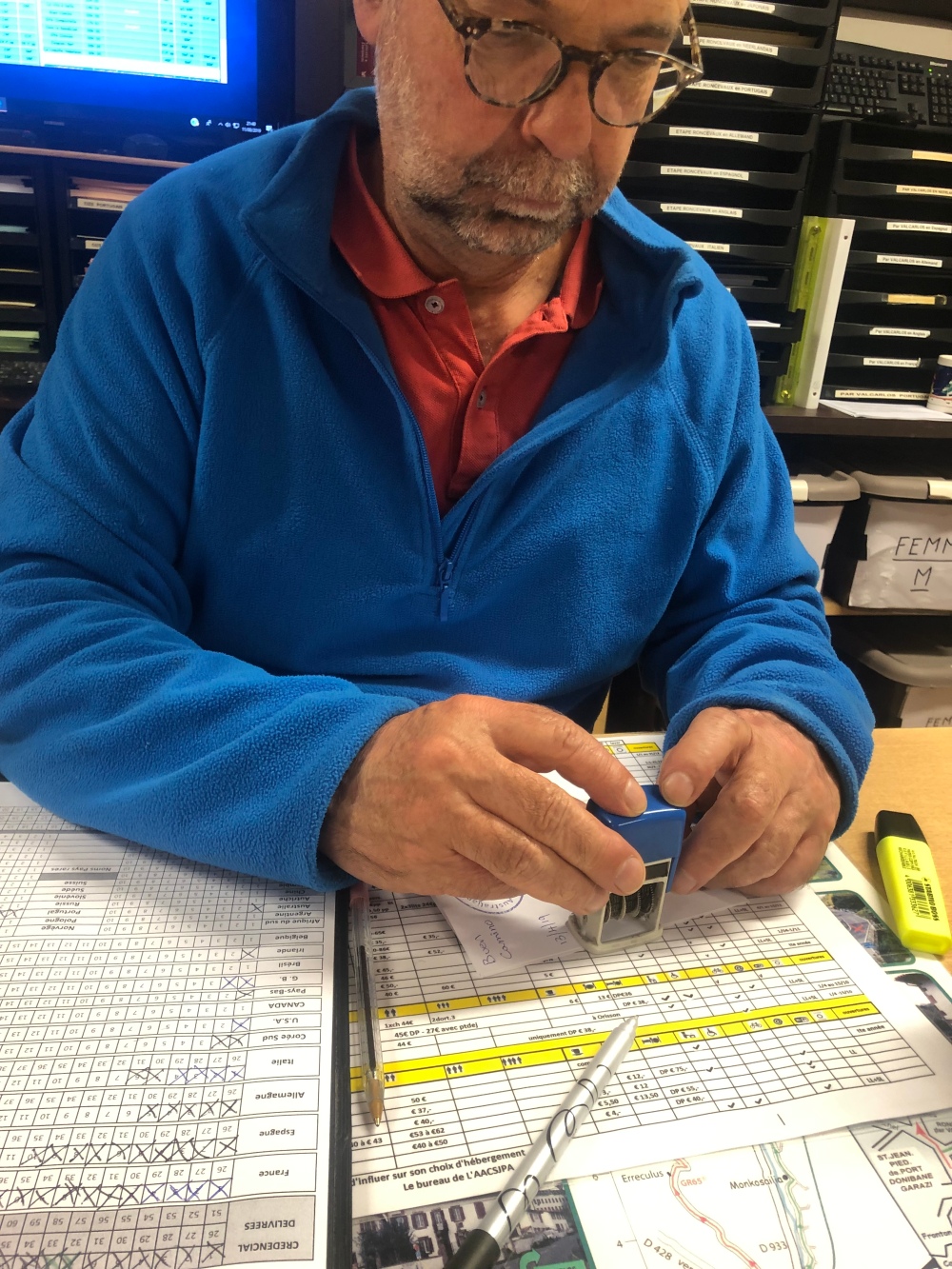 Arriving in St Jean was a whirlwind. I led the new pilgrims up the path I now knew well and directed them to the pilgrim office while I quickly decided on supplies for the journey.

I went into Beillari and was pleasantly surprised to be offered port and soup on the cooks night off! Most of the other residents were French which, as anyone who has visited France knows, they mostly speak only French (not unlike Aussies who mostly speak only Aussie).

As you know I do not speak French so the social aspect of the stay was a little unsocial for me. Oh well, I was here and I had new gear and, most importantly, the only poles that were similar to my missing ones were pink! The lord had shone his little light upon me! Or the baggage handlers at Hong Kong had!

I eventually was shown to my room, oops bunk I mean, and a lovely girl from the Netherlands greeted me explaining she had been in the French crowd when I had arrived. She also offered me anything to help out with my situation. Love the pilgrim spirit I do.

But after my visit to the shop I was set. I was happy. I was exhausted. And most importantly I was in Saint Jean and I was ready to head up the Pyrenees on the morrow.

Told you I’d forget about all the stresses from home once I was on the camino didn’t I?

Buenas noches mis amigos – Ultreia Ultreia! Onwards and Upwards I shall go. Buen Camino to me.