I know, it seems like we are fading now, only doing 12k’s. But frankly Estella was a necessary stop for two reasons – The first is that the albergue I had sent that darn bag to that we needed to post on to Santiago had lost it for a few hours. I spent these hours running between two albergues and sitting in a bar skyping Jacotrans. Eventually it was found but by this time we were both exhausted and, because it was Saturday, the post office was closed so we still couldn’t post it to Santiago and had to send it on through the albergues again.

I popped by a chemist and grabbed some new liners for my boots in the hope some of the all encompassing pain might dissipate and I also bought some insect repellent to ward off further attacks from these spanish flys and foot cooling cream for when a foot bath was unavailable. Luckily I was able to retrieve the long sleeved cragghoppers shirt from the bag we were sending on also. Whilst it definitely isn’t my usual style in had both insect repellent and sun block properties which were necessary now that I was getting both sunburned and bitten as we walked.

We headed for the Youth Hostel Albergue on the outskirts of town after calling the Irache Hotel, which was right near the free wine fountain, to find they had no free rooms. Sadly they had a couple of tour buses in and were fully booked out (I assume some might be the people who pass us bright and perky each day with their little bags and their nicely done hair).

Anyway this hostel was a converted monastery and was an unusual experience. The hostel rooms were like converted class rooms – we had the honeymoon suite (see photo below) and sadly it was about 200 metres from the bathroom! We had a nice meal with good service and very nice pilgrim food, the people at our table were German father and son bike riders (love their stamina), French/Australian cousins walking 30km days (with husband driving on with their bags), a Canadian, a few French and a Mum and Son from the US of A I think. Dinner consisted of tuna salad, zuchini soup, chicken stew and chips, apple pie and stewed apricots. And wine and bread of course for 10 euro. My beloved impressed the manager by clearing tables and had beer thrown in again. (I told you he smiled at me when I was a barmaid and thats how we first met didn’t I? His smile is very compelling when he wants a beer you know – but I dont think I gave him free beer when I served him and it doesnt work on the male albergue managers either!).

Even though we were exhausted the honeymoon suite was not an easy place to sleep. Husbands bed was very squeaky and every time he breathed its ageing legs let out a humongous sigh. Every time I rolled in my bed I lifted the corner of the fitted paper bedsheet and woke myself up. Morning arrived very slowly and I was glad to have the fairly decent breakfast which consisted of cereal fruit yoghurt and pastries. Not all albergues were quite as well equipped for breakfast. The cafe con leche wasn’t bad either! Buenos Noches. 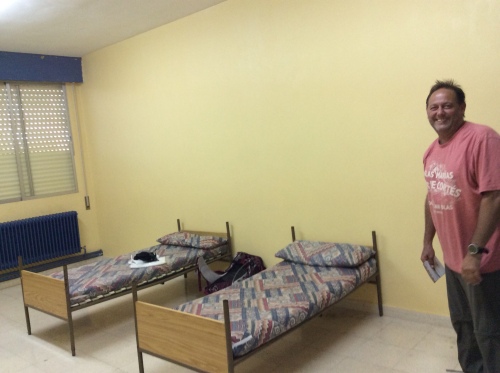