It’s only supposed to be about 20kms between Estella and Los arcos but we preferred to walk that little bit extra today because it was nice and hot and frankly we weren’t sore enough yesterday.

Not sure if anyone would believe that but would you believe we missed the free wine fountain and had to circle back around to find it? Yep, I thought you would. I mean honestly would you come to Spain knowing of its existence, talk about it for days and then just walk right past it? Well guess what – many do. Leaving Estella from our hostel was a back way and we didn’t get all the signs that are out on the main way. Furthermore husband was engaged in a very deep and meaningful conversation with Gareth the kiwi and headed off well in front to a point I no longer knew which way he had gone. I only knew that the Irache monastery and wine fountain were behind and I wasn’t sure whether to turn around and wait for him there (which I started briefly to do) or, whether to continue on in the hope he had stopped not too far up the track to wait for me. Well I continued on and there he was waiting wondering why all the pilgrims were coming out of a different track.

We figured it best to head in the direction they were all coming from as many were still licking red wine from their lips and were all a little too jolly for 8:30am in the morning. As we headed down the hill beside the monastery wall we hap’d upon a very dear old English lady walking the camino on her lonesome. Apparently she had tried to do this on the first stage last year when her daughter and granddaughter insisted on going to Pamplona with her. She was determined to do the 50km this year alone and by all accounts was doing quite well for an 82 year old. Her only concern was that if she did 50km sections each year as many do, she would be 92 before she got to Santiago and so she thought she might go on a cruise next year to Santiago instead.(not sure if cruises could go all the way but I’m sure she could figure that out.)

Anyway due to our error, meeting Kay and some dawdling at the fountain, we were late enough so that the museum opened and we were able to get our passports stamped as proof that we had visited the free wine fountain. I have to say for all the trouble that their free wine was not overly impressive. There was water to refresh the pilgrim and wine to give energy in the tradition of the monks. I didnt feel much like drinking that early so I filled my water bottle with wine, as you do. (I still have my water system in my pack so I wasnt going to dehydrate so don’t worry.)

So off we headed for a very long day toward Los arcos. After many hills and a significantly long descent we crawled into town at around 6pm having left Estella at around 7.30am. Not long before arriving in Los Arcos I was dragging myself down what had become a fairly narrow track when out jumped a very energetic black snake of sorts. It was only about 20cm long and was wiggling like a tail does when chopped off a lizard but at the same time it was jumping a few centimetres off the ground. Dad had always told us too carry a stick when bushwalking back in Oz – purely for snakes – here I was glad to have two walking poles and I managed to tap it with one of them which sent it on its way. I then started wriggling and jumping not dissimilarly to the snake and ran down the track yelling “Snake Snake!” Husband some distance up greeted me with a laugh “I can see that frightened ya!” Well here I was thinking there were no bities in this country and within one day I was sunburned, attacked by insects, and set upon by a black snake! I have no idea what it was but at home if a black snake came bouncing out of the bush I am fairly confident he would be very very dangerous and quite likely deadly so you can understand my reaction.

Anyway yet again I wandered into town looking very much like a person suffering from a serious disability – and as I limped up the main drag husband headed back towards me to direct me to the Austrian hostel with a double room. Guys were busy putting up timber barriers in readiness for the running of the bulls and, unbeknownst to us, we were right in their pathway! It was quite funny trying to climb through the gates with our backpacks, and I dont want to make fun of my husband but, he almost got wedged between the two rails!

The bulls were running in 1/2 an hour so it was a real effort to dump our gear and actually walk back downstairs to watch when all I wanted to do was elevate my feet and cry in pain! Well I managed to see the bulls running up and down the street and decided this was how the local boys show off to the girls. Risking their lives being crushed by a bull. In our country its playing football or surfing or something. An ambulance reversed up the street next to us and a heap of young kids climbed over the barriers we had just climbed through and out onto the street to get the adrenaline pumping before each time the bulls came through. There were men chasing them straight back in as soon as you could hear the bulls coming back down the street again. All in all it was quite a find to stumble across as they apparently only do this twice a year and this weekend it had occurred on both Saturday and Sunday nights. 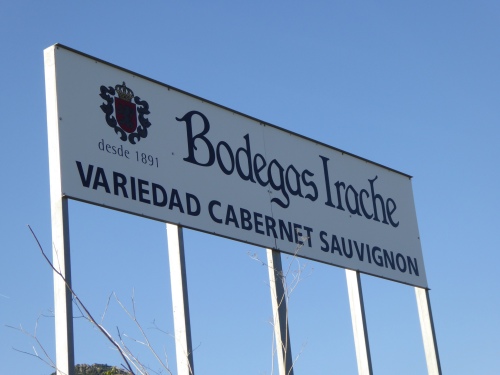 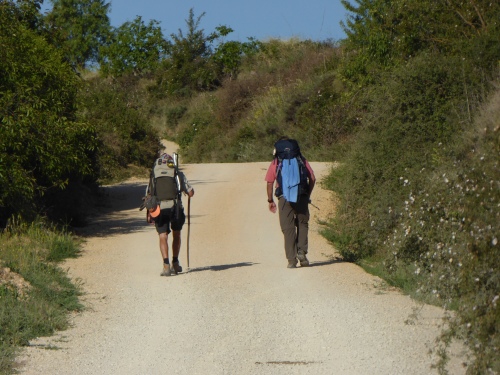 Husband chatting with Garth the Kiwi 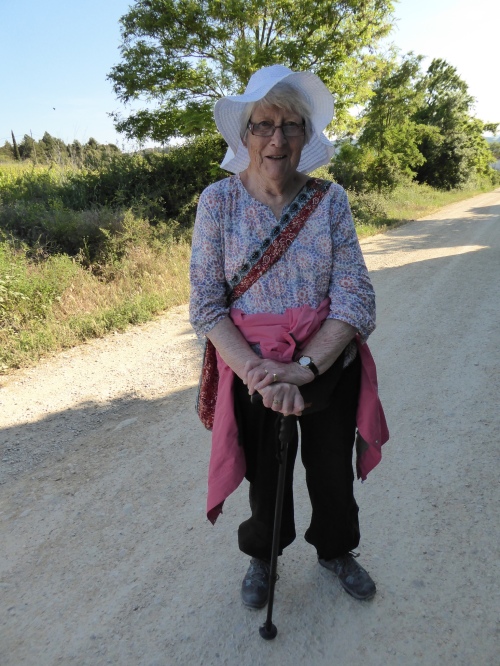 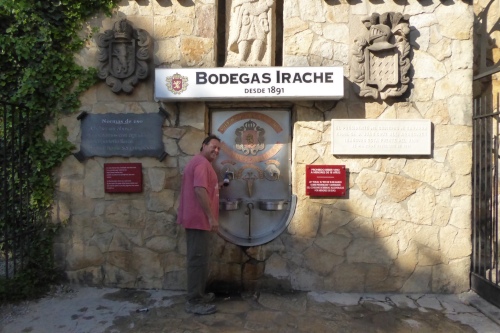 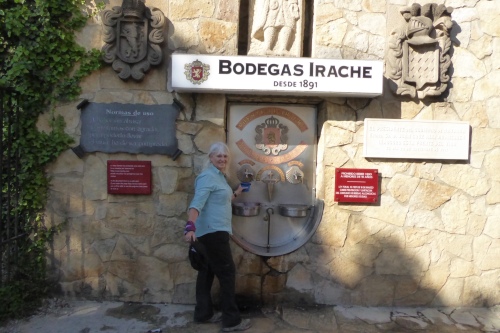 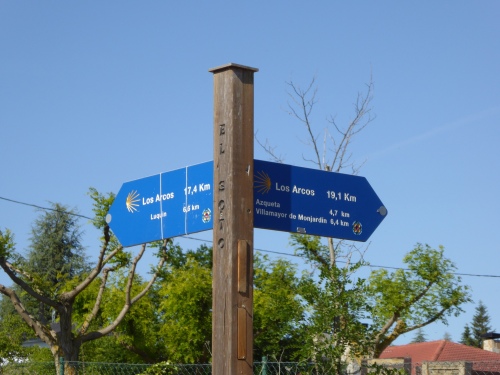 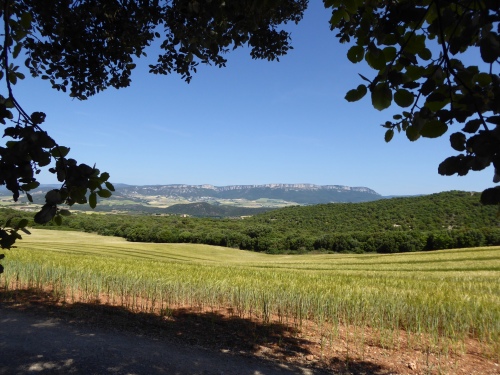 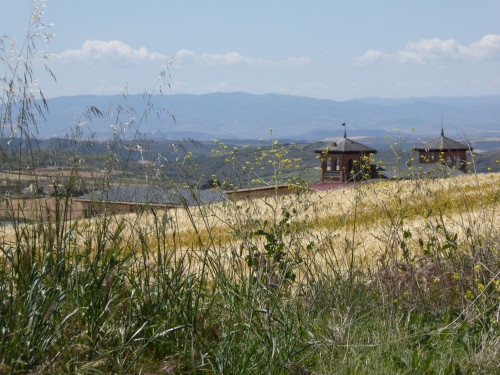 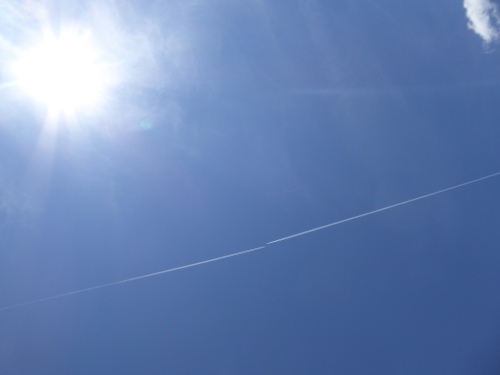 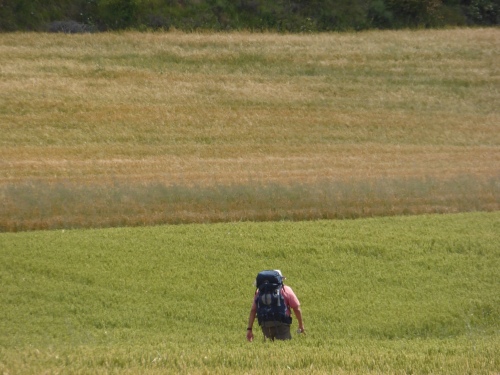 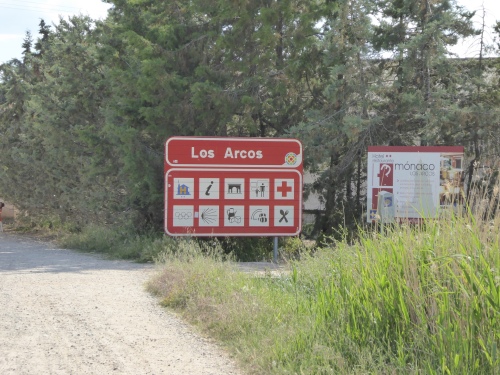 And now Husband Running with the bulls 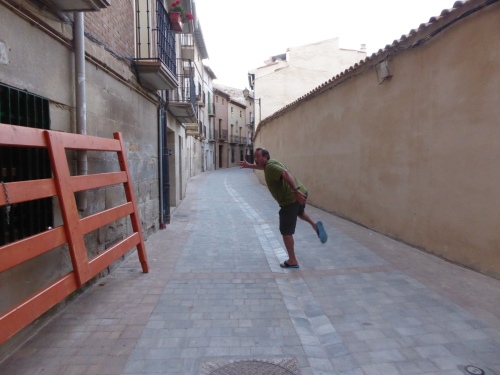 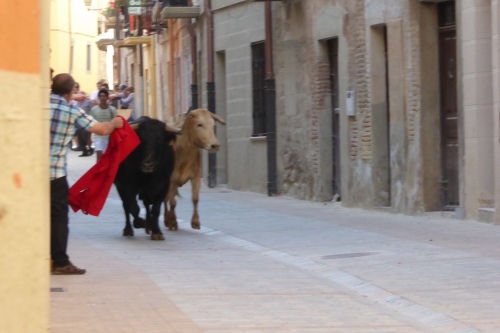 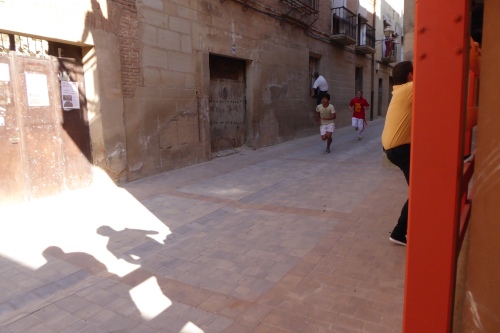 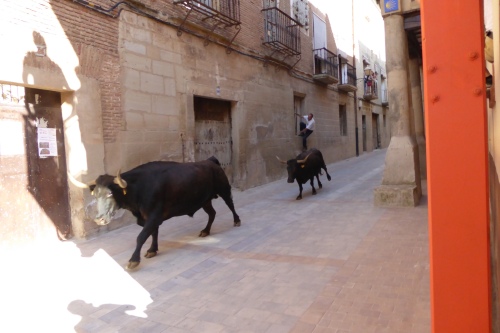 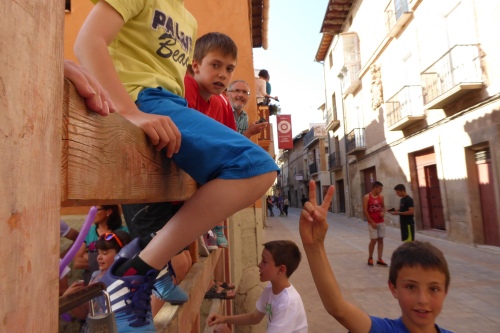