I had a grand plan today – I wanted to stay at the Hermitage of St Nicholas where there was no electricity and the Italian Monks washed your feet before a candlelit dinner. Husband on the other hand, had a distinct dislike of the idea of some stranger washing his feet and, even though we are on a “religious” pilgrimage he is not all that comfortable with some of these Catholic traditions!

Anyway we headed out after our hostel manager repacked our bags – he didnt like my boots hanging out of my pack or our lunch hanging out of husbands so he kindly rearranged things so they wouldnt swing – well he didnt speak English so we think that’s why he was so helpful!

We thought we were now on the Meseta and were a little perplexed by the rather large hill in front of us as we headed out of town. My beloved was confident that the pilgrims of old would have gone left or right as there were clear valleys either side and we wandered on confident of a flat walk for a while. Then, wouldnt you know it – we could see little specks moving on the rather steep road in the distance and sure enough we concluded a rather steep climb was in front of us. 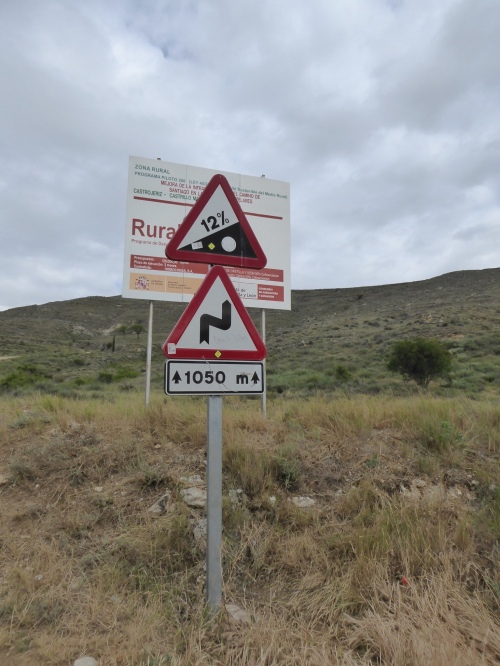 I have to say this hill was another donkey killer and when I turned at the top to see the view it was quite a shock – the photo below shows the village and little hill in the distance Castrojeriz where we had just left. 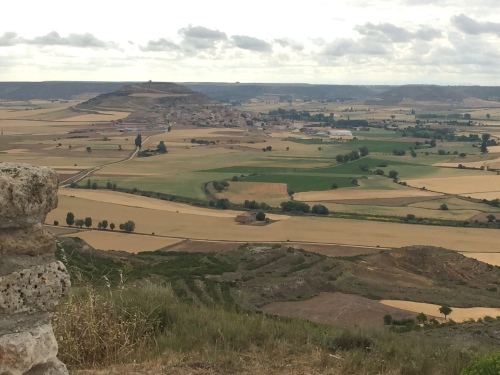 At the top I thought we would have some time for some quiet reflection as we caught our breath and absorbed the view. But this was not to be – no! There were a couple of nice Spanish ladies from Seville and we took each others photos and had a few laughs, but then… Crowds of people appeared from nowhere and gathered in our resting spot. It turns out they were on a 12 day Camino covering the same distance as us with an on again off again bus tour! Well that blew the serenity! 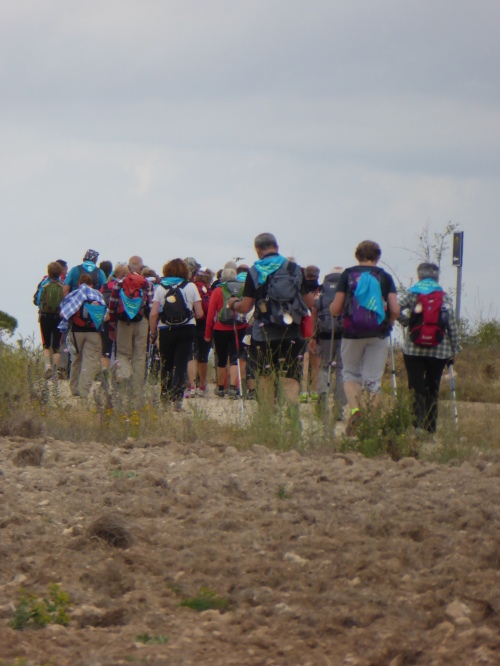 the first crowd on our camino!
Anyway we kept walking for a little while and then realised we had to go down again!

It was at this point we stood alone admiring the view and had a brief kiss whereupon Jim from the States arrived and insisted on a photo. 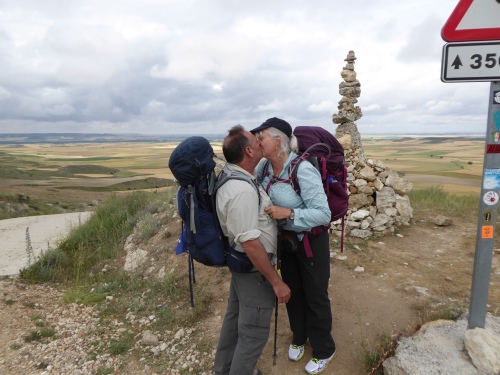 Well talking to Jim was like entering a Billy Crystal skit. He had just had his birthday yesterday and it had been a disaster. His feet were a mess – a friend offered to buy him breakfast for his birthday (the Australian with the tendonitis we had met a day or two before) – the breakfast was a disaster with dry bread and bad coffee, he decided to hire a bike but noone could tell him where to and there was a prediction for rain, it started bucketing down rain, he decided to catch a bus and couldnt find the bus station then was made to wait in line – during which time the bus left – and he called his wife who suggested he come home, he couldnt get a flight until Thursday anyway so he finally decided to take a taxi from Burgos to Hontanas. He had left Hontanas this morning and that was when we met him. He entertained both of us with his story and accent and, although suffering foot pain, he took off at speed and that was the last we saw of him. 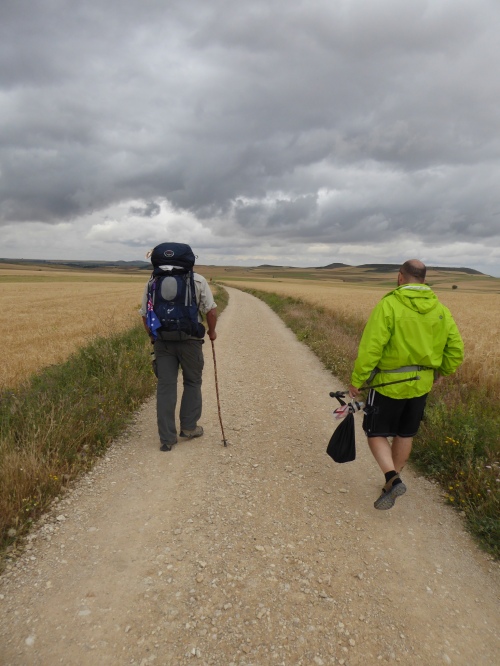 Husband and Jim from the States
The dark clouds of mordor actually caught us not long after this and out came the poncho for my beloved and the coat, pack cover and umbrella for me. (yes I sent my umbrella to Santiago but realised I needed it and bought a new one when it was bucketing down in Burgos – good for rain and sun but not for wind).
Eventually we came upon the Albergue Saint Nicholas which sounded so appealing. We could only see it from the outside although the facilities in a separate building were open at the back so that visitors could use the toilet. There were also signs of a visit from a nice ass and the Frenchman!

As we rested out front for a while where we saw Lyn from Canada again – she had stayed at the San Anton Ruins where there was no Fiesta! Apparently rumour had got around the Camino and many people dropped in that day wondering where the fiesta was. We all had a laugh – I wonder what the lady from El Molino actually told me – where exactly was that fiesta? Unfortunately the hospital Saint Nicholas was not opening until 2.30 so I didnt actually get to look inside as we had moved so fast and it was only midday! – but because it was so early there was no point hanging around as we could easily get some more kilometres in today so we headed to Boadilla del Camino to a hostel which had a pool.
On our way we stopped for picnic and enjoyed a few minutes of rest before the rain hit again. We also passed the canal that crosses 200km of Spain (or did) and has been there for hundreds of years. 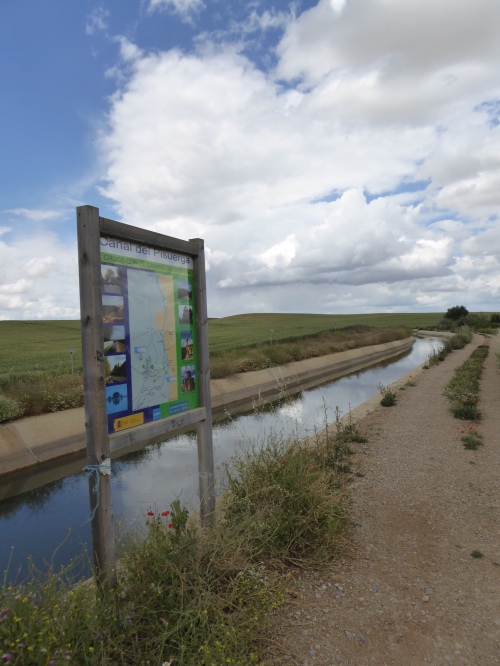 Unfortunately when we arrived the darn pool was empty so my second Camino swim was not going to happen today. The day may have been cold but walking around 20km warms up your body and I could swim in any pool placed in front of me! I had called ahead and asked for a double room instead of the dorm so we could have a good rest and, as it turned out, the double room was in a brand new building next door so this compensated for the lack of pool. We went back in to the dining room for the pilgrim dinner which is never really a gourmet specialty but the soup was excellent and there are always a few interesting people to meet.

Beef stew – Husband carries his own tomatoes! (And chillies)

Bean and chorizo soup in foreground – white vegetable soup in back
Throughout the day I had been asking people to speak into my phone to wish happy birthday to Alani who was turning 21. She is a friend of our sons from back in Oz so it was a bit of fun and we met a few new people. A few of them ended up on our table at dinner including Jay, a property developer from the states and another one or two.
After dinner Lyn popped out of the hostel room and was not having a lot of luck sleeping with the young college students in the room. We told her about the wonderful private rooms they had next door and before we knew it the three of us were sitting in the bar having a couple of drinks and sharing a massage or two with the German lady Karin who was suffering from a serious sore back. It was another night with good company and a lot of laughter and pain!
Buenos noches.