This day started well with our host driving us back to Hornillas. Enroute I was having a very in depth conversation with the lady in Spanish and my beloved husband was impressed. I learned that she was from Logrono and her husband was from around here. I complemented her staff Erica and Rodrigo from Brazil and told her where we were from. I learned that we were to have a relatively easy day after the first hill and I also learned there was a Fiesta at San Anton today …. or so I thought.

So we headed out of town and my husband posed in front of another Hobbit house and I was bouncing along in my new shoes. My main concern was that the dark clouds of Mordor would stay away as my new shoes were not bestowed with the gift of Gortex and frankly water was going to cause some problems.

Frankly I had rockets in my feet. After a little while we headed up one of the many hills and I could see three figures in the distance. I focused mainly on my feet (as you do) and looked up occasionally noticing the three figures were seemingly getting closer. My beloved and I discussed this at some length – could we actually be gaining on these people? Were the new shoes so much better than the hiking boots? 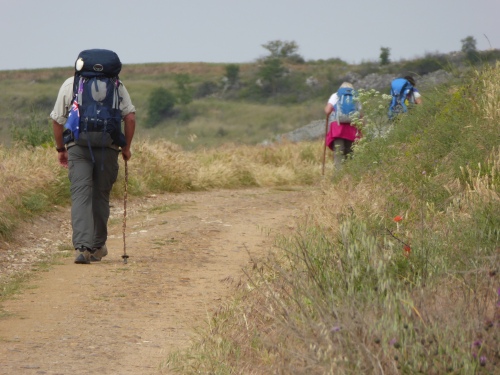 When we finally closed in for the kill these lovely three ladies from Germany kindly stopped and allowed us to take their photo. It was quite a thrill – our first overtake for at least a week! 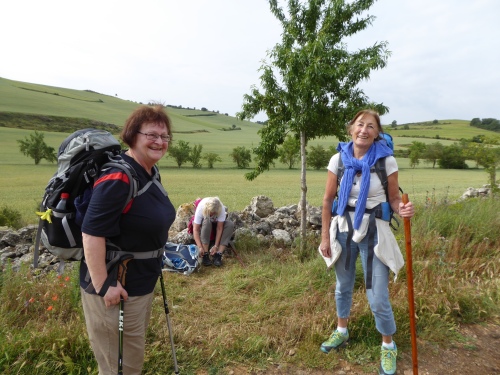 Told you I love the Germans!

As we passed over this range heading to Hontana we had a couple of opportunities to rest and also some wonderful opportunities to enjoy the country – the pain was no longer the main focus of my day anyway! 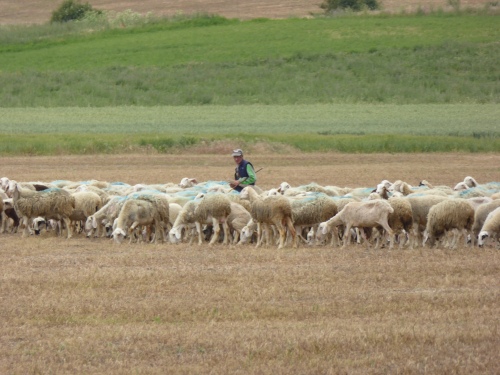 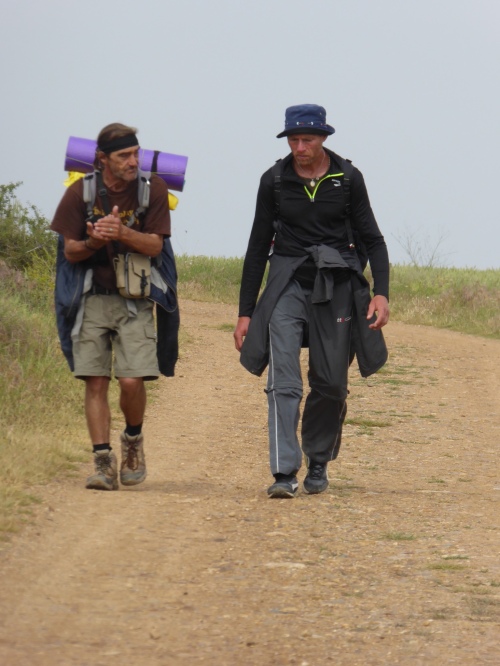 Finally hit Hontanas and, as usual, had a little break just as the rain hit. Here we met Lyn who we had been passing on and off for a day or two. We also met Aoife from Ireland (who we would later discover was travelling with a friend of our eldest son’s) and we also met Isabelle, a young healthy athlete from Louisiana who was wearing compression socks and suffering from some of the same problems I was (so its not just an age related thing!)
I shared with them the possibility of a Festival in San Anton based on my limited understanding of my discussion with our lovely host earlier that day. We had a bit of a laugh about not wanting to pick things up when you were exhausted and Lyn made us laugh with her story of dropping her hiking pole and wondering whether she really needed it enough to bend down and pick it up!
The wind came over with a chill and I headed off quickly to warm up as I didnt want the bother of putting jacket on then off again once we had warmed up. Husband quickly followed suit and we headed on to Castrojeriz in the late afternoon as usual. 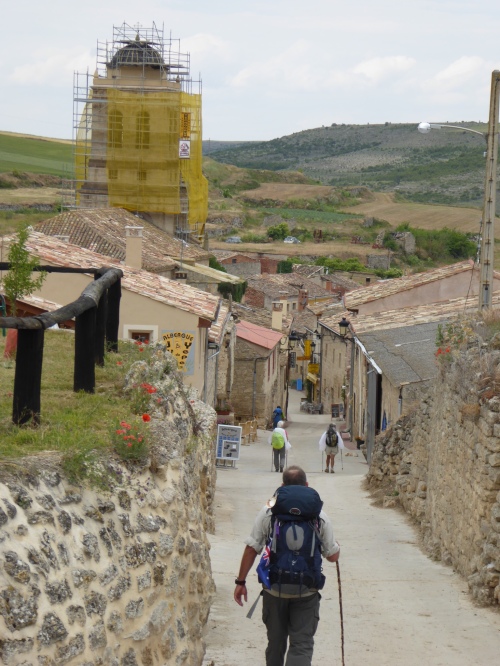 We continued on and I noticed that the fast beetles and the ants were being replaced by strange little centipedy type things. These were actually slow enough for me to photograph though not as attractive as the snails and slugs of the Pyrenees.

We arrived at San Anton Ruins and noticed there weren’t no fiesta happening there! The volunteer hospetelieria (or whatever you call them) invited us around to have a look at the inside of the ruins and the unique hostel inside. Aoefe and Isabelle arrived with Alex at around this time and also dropped around to have a look and a rest and we all had our passports stamped. Apparently this is where the Templar knights used to hang out if anyone is a fan of history or of the Divinci Code! 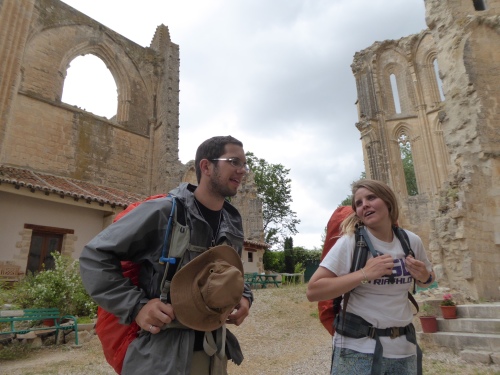 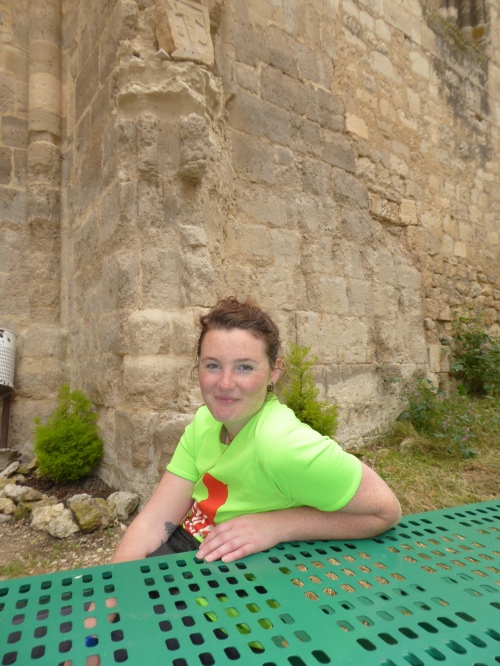 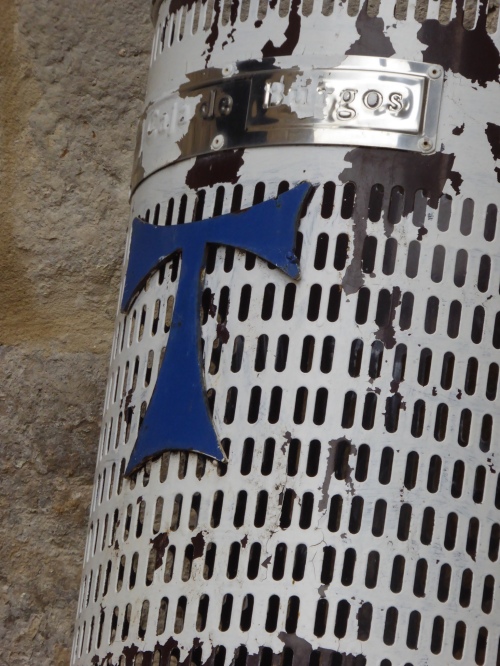 Templar T – a sign of good luck for pilgrims 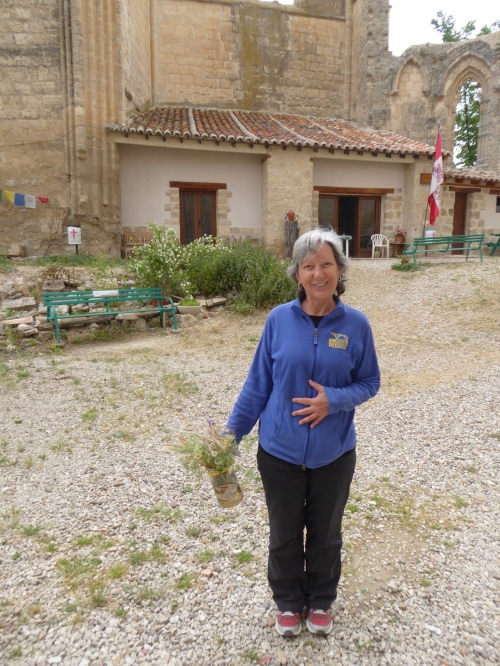 Given the lack of activity happening here we headed on the next few kilometres to Castrojeriz – apparently the longest town on the Camino. This we can confirm as we walked from one end to the other looking for a room eventually settling at an albergue back at the beginning.

Before settling on the room an elderly gentleman took it upon himself to assist us and grabbed my arm dragging me in the direction of one of the hotels – having been shown significant kindness by most I politely declined and tried to pull away. He was obviously oblivious to the fact I was travelling with my husband. Anyway I politely said no and asked if I could take his photo – after which he took it upon himself to grab me on the butt! Husband finally came to the rescue and we headed in the opposite direction to find our hostel.

At dinner with Isabelle later it turns out he grabbed her on the arm too and tried to lead her away however she already had a hotel booked and escaped his grasp. He was hanging out in the main square just waiting to assist lost peregrinas. Watch out ladies – theres an elderly Romeo in Castrojeriz!

Isabelle brought her crawfish to dinner. I know you are probably wondering if people from Louisiana carry crawfish pets around the Camino and we were having a good laugh with her. It seems Isabelle found them walking across the road (as they do after rain apparently – why do I only see snails and bugs?) Anyway she intended to cook them for dinner. Unfortunately her lodging had no kitchen so we hypothesized on whether she might take them to Santiago and we could all meet there and eat them. Or she could take them home and breed them! As it turns out I think she planned to set them free rather than continue restocking the water in the plastic bag and taking them out for dinner on a regular basis! 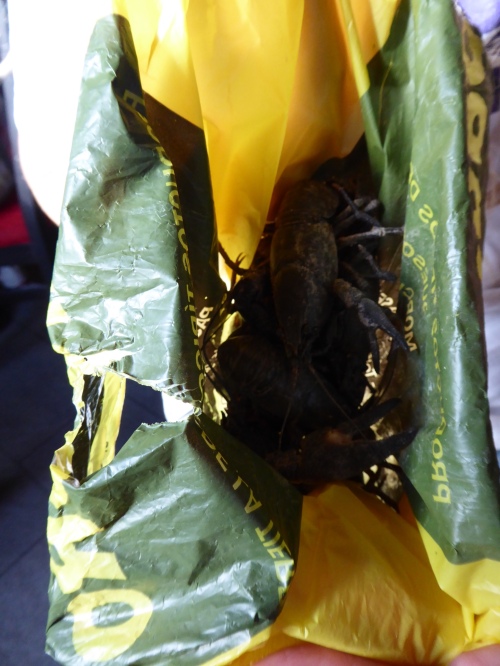 We had a great dinner with these two young americans with a lot of laughs. 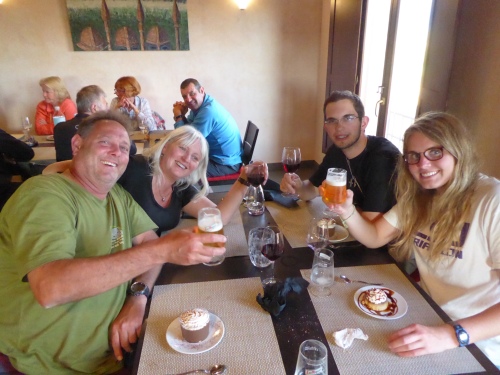 We stayed in a great hostel with a really old cellar and wine press and a very nice manager. 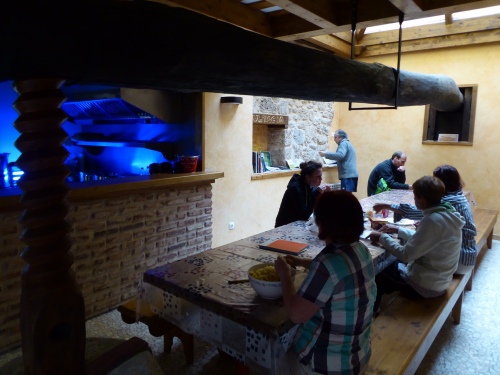