What a day! Just when we thought all the fun was over and our Camino was coming to an end we decided to do a short day and to send our packs again to ensure we arrive in Santiago in one piece (14.88km). Well at least to ensure my heel arrives in one piece! Things were not overly fun until we bumped into Jorge and Lola again. We had met them yesterday a couple of times (they were the ones who suggested the paddock with the tables and chairs) and, as I have said before, if you see someone more than twice on the Camino they become like old friends. I think what was obvious was that they liked to stop at bars also! They were great fun. It was our good fortune to meet them because I could practise a few Spanish words and they could teach us a few things about Spain because they are from Barcelona.

Today was also good because we had also heard from Michelle and JC – they had not run off to France and we just might get to see them again before or at Santiago. Last, but certainly not least – Anthony and Marten were walking again (you know, the Frenchman with the nice ass). A few days back we had been deeply saddened to hear that Marten (the nice ass) had sore feet and needed to stop. Afortunatemente Marten was feeling better and they were already at Rabanol. 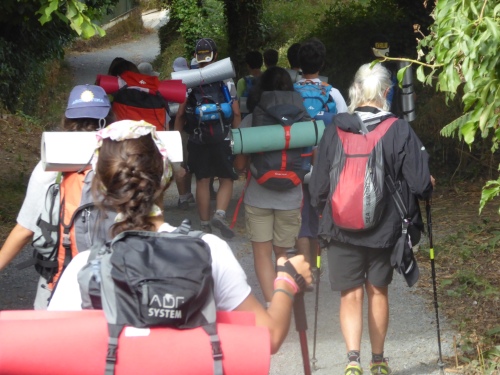 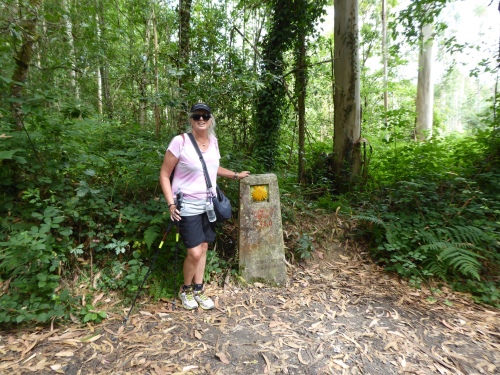 So we left Melide after having a late breakfast in the main street. There were hoards of students again and it was not a peaceful walk for the first 5 or 6 kilometres. I was still feeling a little saddened by different news from friends at home, those battling illness and loss of loved ones and the lack of buen caminos was becoming more and more noticeable. I was trying my best to say it to all who passed. Then we saw Jorge and Lola again which made us smile. They were in another bar having a drink just like yesterday. (Maybe they were eating but lets not let the truth get in the way of a good story). We started playing leap frog and, as we walked along today we actually overtook Jorge and Lola at one point while they were actually moving and of course I had explained to them that we had to take a photo last time this happened so they insisted we take one this time!

We had some great laughs along the way and Lola decided to teach me flamenco seeing as that I wasn’t sure I’d be able to walk again let alone dance by the time we reached Santiago. We also discovered that they too went zig zag down hills just like me and husband thought that was hilarious – I have had a hard time convincing him how much better ones knees feel doing that. We had a lot of laughs and I learned that my name sounds like Rooster in Spanish – Gallo pronounced gayo! Think I’ll stick with Mary.

Anyway about two k’s before our town they were getting picked up and taken to a casa rural somewhere so we stopped and had a drink with them while they had their lunch. They ordered pimientos del pablas (I’ll have to check that) and said it was like one in twenty. They looked like fried jalapenos but tasted like fried capsicum. They explained that one in twenty means one in twenty will be spicey hot. It was like playing Russian Roulette with capsicum so we all indulged. First Lola got one, her eyes watered, she turned to the side and drank rather large gulps of beer. Then Jorge had one and started coughing and choking. My beloved, who looooves spicey food was jealous he kept getting the mild ones so we ordered another plate. This time I ate two that brought tears to my eyes and, down to the last capsicum, husband got none! I have christened this game “Spanish Roulette” and I am fairly confident we will be eating a lot of capsicums now we have discovered it. 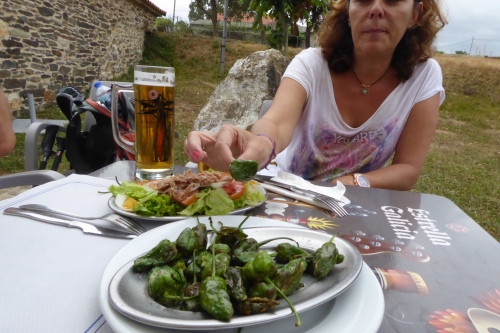 We left them eating their lunch and headed off to find our albergue which was meant to be on the near side of town. Thank heavens because yet again we had another large ascent to finish our day – I must admit it is one of the first times in weeks I have arrived somewhere not needing to immediately soak my feet in cold water or rub voltaren into my heel. After taping my heel and covering it with the silicon padding meant it even felt okay!

Desafortunatemente this joy was short lived. Husband went downstairs without a key and discovered he couldnt get back in the building. A nice school teacher standing nearby lent him his phone to call me. Then he discovered his phone had no credit. So we spent the evening walking up and down a very long main street buying more phone credit and eventually speaking to the Chilean call centre for Jazztel and resolving all phone problems. Recharging a Spanish sim is not a simple process you know. But we succeeded – we are champions! Now we could rest.