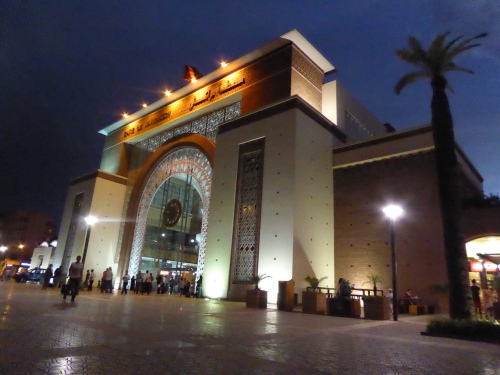 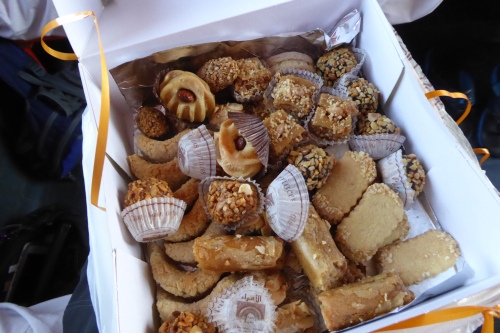 I bought some Moroccan pastries to take with us – may have overdone it!

In order to ensure the adventure continued we decided to catch the Marrakech express backwards to Tangier rather than waiting around airports for delayed flights. Whilst waiting at the train station we eventually figured out it too was delayed. Not easy to figure out when noone (and I mean no-one) speaks english and we dont speak Arabic. The station was hot and when we eventually boarded the train the inside too was hot. Eventually the air started to kick in and it actually wasn’t too bad. The nice man at the ticket counter had suggested we could buy two adult tickets and two childrens tickets to ensure we had a whole sleeper cabin to ourselves for the journey. They provided sheets and pillows so it was almost a pleasure to zip through the country (nothing like the Chinese or Egyptian trains of our early travelling years). We awoke quite early and managed to see a fair bit of the Northern area on Morocco on our way, passing beaches on the Atlantic as well as the rural areas of Morocco. 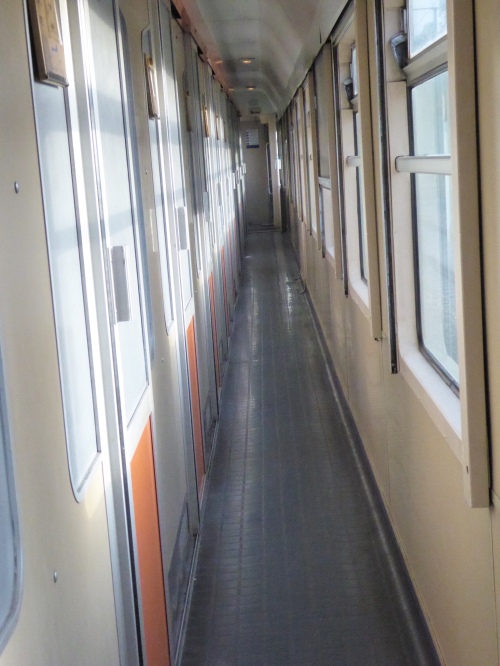 How they separate first class sleeper from economy! 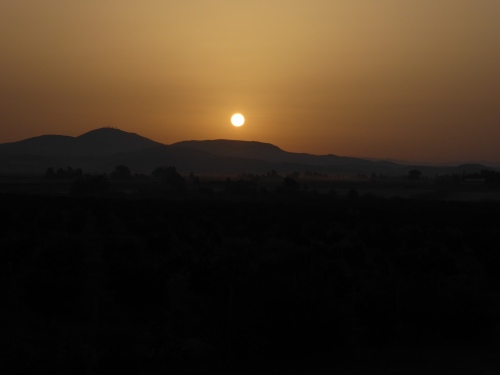 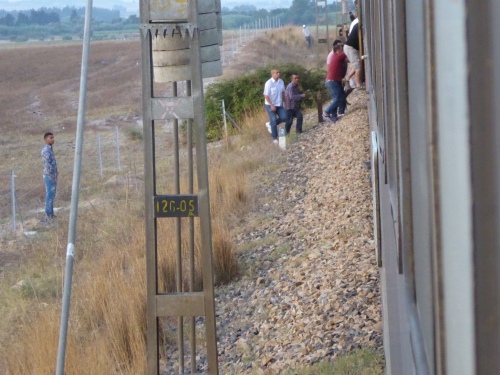 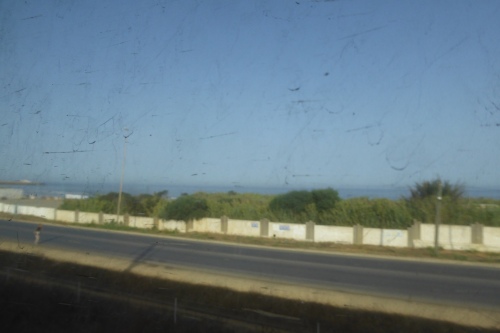 Once we hit Tangier there was general chaos again at the train station with what appeared to be hundreds of taxis fighting for a couple of hundred passengers. We negotiated a fare and went straight to the port via the city and jumped on the next ferry to Spain. 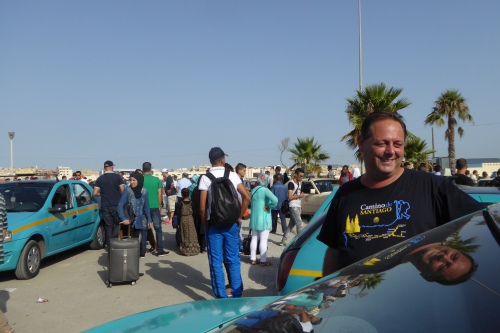 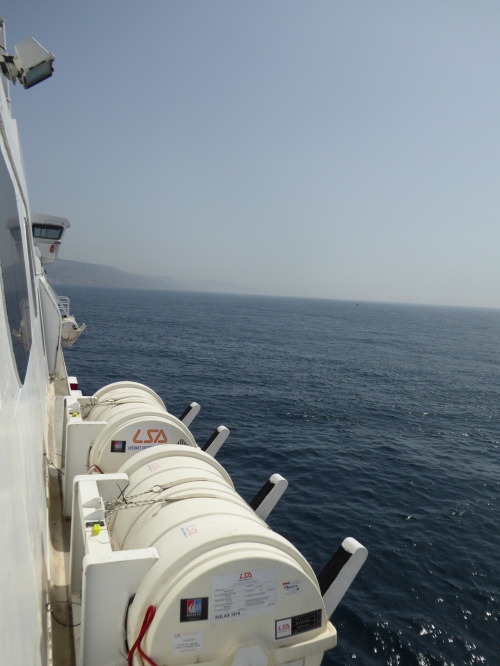 Spain in the mist

It was a smooth ride across the opening to the Mediterranean and we spent a lovely day in Tarifa – a Spanish mecca for surfers and world renowned destination for Kite Surfing. Tarifa is the Southerly most point in Spain and actually would be quite appealling for a longer stay but we were now on a time limit.

We bought tickets for a bus to Seville that afternoon and headed to the beach to wait and for a swim and a feed in one of the bars. We ended up having a great afternoon with a couple of lovely ladies and a fellow who happened to be the organisers of the world Kite Surfing Championships. We really would have liked to stay a bit longer.

We headed up to catch the 4pm bus to Seville only to be told we had missed it! Yep we had no idea what time it was anywhere anymore – it changed in Portugal, then in Morocco on the way in and then on the Sunday after the end of Ramadan they put daylight savings on – now in Spain it had changed again. No wonder my body had no idea when to sleep and when to wake! Many had warned us against Seville as it would be too hot. I have to say it was probably the nicest place we had been to in Spain so far and I was so pleased we went – it was hot but it was a beautiful mix of old and new – I would love to go back some time in April or May. We arrived at 8.30 and raced out to catch a Flamenco show and hit the sack somewhere around 1am. Unfortunately our schedule did not permit the much hoped for Flamenco lessons but the show was so impressive I am sure that husband has recorded the moves required and will impress me with some tap dancing at home that will make Michael Flately look like an amateur! 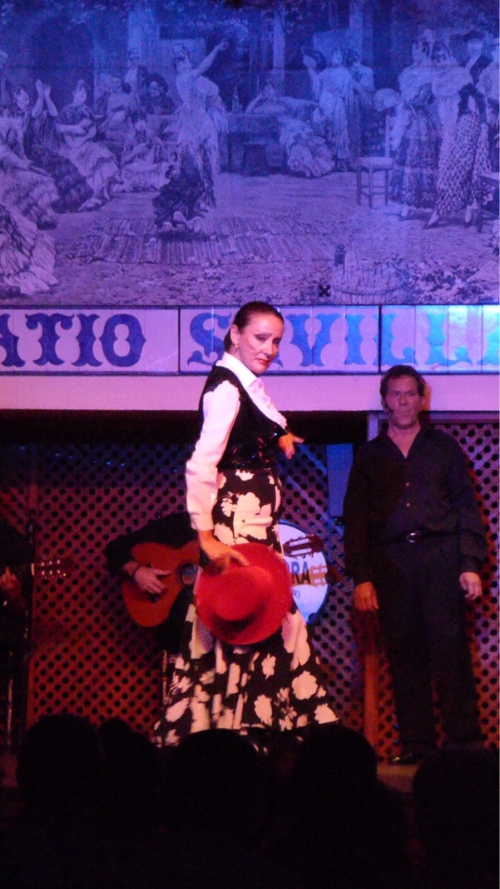 Rather than race out early the next morning we wandered around the city for the morning and caught the afternoon AVE train to Barcelona and marvelled at the speeds being shown up on the monitor. (And yes the temperature was still up there too). It was as we were packing to get out of the hostel that I realised the Camino credentials were no longer in my bag. These were the passports we had had stamped at every stop along the way. Panic rose in my stomach. They were nowhere to be found. We headed out to a cafe and I emailed Marrakesh and Lisbon. Thank heavens for technology. The lady in Marrakesh found them as they had slipped behind a chair. Lets hope the mail in Morrocco is reliable! 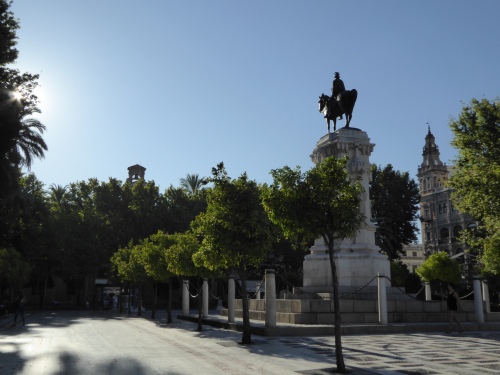 Back to this high speed train. That train was a great way to speed through the countryside and see Castles, hilltop ruins, villages, cities and windmills. We watched the speed monitor and saw it hit 296km per hour a few times. The conductor said (and I quote) “It only goes up to 300km”. Yep, “only” 300km per hour. Imagine that – Brisbane to Sydney in 2 – 3 hours on the ground. 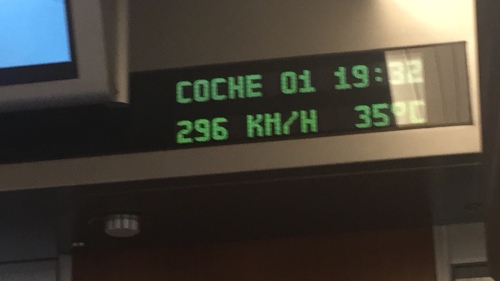 So there you go – the weather was hot and the train was fast! Now we have two days in Barcelona before heading to Malta to meet Mr Wong and catch up with my Aunts relatives and see the cave she lived in. I know sometimes I shock you but this is a true story – my Aunt is a cave woman and my Uncle always bragged about marrying a cave woman. That should be a treat to see. Rumour has it from home that there is also a fiesta on while we are there too – lets see how that rumour goes!