It seems forever since we finished our camino. We (I) thought if we had spent all the money to get over here (Europe) we may as well make the most of it as the chances of heading back in the near future are pretty slim. Anyway budget required we continue for the most part as backpackers with a brief sojourn in Malta for rest and recovery at a resort where we will meet our good friend Mr Wong who has migrated to old Blighty from Australia.

Following our quick trip to Portugal and Morocco, a couple of days in Barcelona seemed important. Rumour had it that it is a beautiful city and, I had a friend there I had met in Australia when she and her husband were on their honeymoon last year. We had since also met Jorge and Lola on the Camino and looked forward to some more fun and laughter with them.

How did our Barcelona visit go?

We arrived in Barcelona on a beautiful evening and headed to our hostel “Casa Gracia” via taxi. The lifts were a bit dodgy but the double room was fantastic (equal to a suite in any 3 star hotel) and there was a talented duet singing in the bar downstairs. 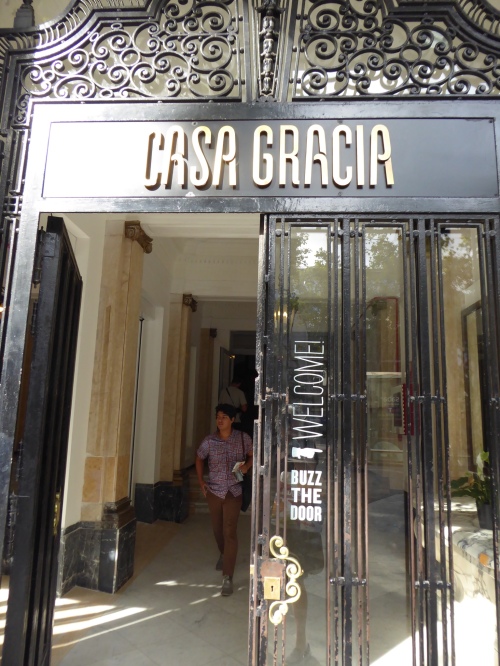 We decided to do a free walking tour the first morning to get our bearings and try and contact our friends throughout the day. I had sent both a couple of messages and heard nothing back so we enjoyed a few hours walking around the old city being shown interesting areas where Game of Thrones was filmed (not that we have seen it) and historic areas such as where the Spanish Inquisition took place (glad I wasn't around then let me tell you). We finished the tour with a burrito and a margarita and a few new friends from the tour. We walked along the beachfront having an interesting stroll just people watching and ended up catching the tour bus back to our hostel thinking we'd use the ticket again the next day after we checked out of our room.

Filming of Game of thrones and sad site of rememberance

Looking up to the balcony where the Spanish Inquisition took place

Fortunately that night Jorge checked his emails (he was on holiday and wasnt watching them all day) so we managed a meetup with Jorge and Lola who were leaving for the South of Spain the next day. It was another fun meetup – they invited us to their apartment down near the beach and yet again we had a few good laughs and hopefully encouraged them to visit oz sometime. If for no other reason than for some more Flamenco lessons! 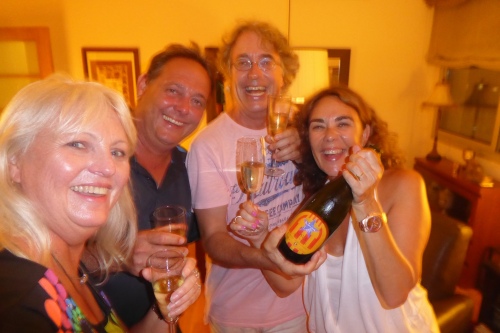 Our wonderful Friends Jorge and Lola

I tried again to contact Ximena my other friend and decided to visit her facebook page where I was disturbed to see some strange notices in Spanish that I didn't quite understand. I used google translate and was shocked to find that Ximena had been the victim of a fatal accident – this was only months after returning from her honeymoon in Australia. This explained why she had not responded to my last few messages. I was quite devastated and struggled with comprehending how someone so young and beautiful could have met such an early end. Maybe it was a strong reminder of losing our own loved ones and close friends before their time – it hit quite hard. All I could do was send my condolences to her family and her husband over a facebook message. It reminded me again of how lucky we were to have each day and how important it is to not take a moment for granted. We left Barcelona with me feeling particularly sad and at the same time looking forward to seeing Mr Wong's smiling face – determined to enjoy Malta – making sure we live while we can!

Well Mr Wong's face was at the same time dealing with some rather displeasing news – or as we have come to laugh about – first world problems! He had booked the resort where we were all to stay months earlier (before us) as a package with flights through a UK travel company called Low Cost Holidays (take note everyone). Only days before our holiday they notified him that the resort was overbooked and he would have to stay elsewhere even though we (my beloved and I) were still committed to staying at the Dolmen. Enroute to the airport he (Mr Wong) discovered they had booked the other resort for the wrong dates, hence there was an urgent need to contact Low Cost Holidays again!

At the airport Mr Wong's first flight decided to wait for a couple of passengers who were lost in the airport. Eventually they unloaded the hold and removed the lost passengers' luggage moments before they finally arrived. For reasons beyond comprehension they then reloaded their luggage and allowed them to board before setting off even later for Vienna. In Vienna Mr Wong had to run for the connecting flight to Malta as low cost holidays had not factored in the often encountered delays – nor the length of the airport! This flight boarded at the other end of the airport (some ten kilometres away or near enough). During his rush to get to the Malta flight Mr Wong managed to twist his ankle. When he finally arrived in Malta his luggage had missed the plane and he was nursing a swollen ankle. Whilst waiting to fill in his lost luggage form (inside the baggage area behind many others), his hotel transfer departed no doub assuming Mr Wong had missed the plane. Mr Wong then had to pay extra for a taxi from the airport to the new hotel which was quite a distance from ours.

In the morning the hotel boutique stocked only tourist clothing with Maltese holiday motifs all over them. Mr Wong managed to find an orange and white striped polo (with only a small Maltese cross on the pocket) and some red Hawaiian patterned board shorts along with some thongs advertising Malta all over them. That was as good as it gets. He was ready for the beach sin goggles, suncream, towel etc – all missing in his luggage! 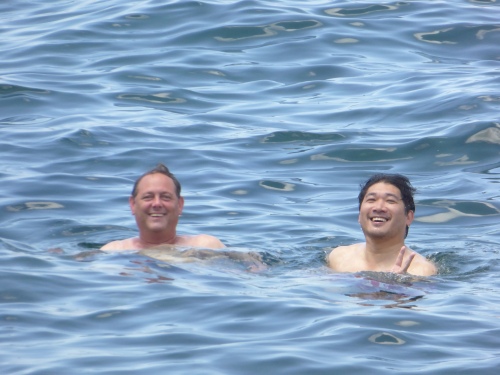 Around a half hour after Mr Wong left the airport in his taxi we arrived and our transfer greeted us and immediately took us to the resort we had booked. We checked in and went straight to our room feeling hot hot hot and needing some airconditioning. Sadly our air did not seem to work. Nor did the inroom internet they had advertised and which we finally looked forward to after forking out the big bucks. My beloved called downstairs and the not so lovely man on reception said he would get maintenance to look at the air in morning. He also said their were too many people using the internet and that's why the wifi didnt work. At 2.30am? Que? (FYI The air con improved only marginally for the rest of our stay and this was only after we complained again and again – it was certainly not climate control as advertised – fan control at most – frankly many of the 5 euro hostels had better facilities!)

Well that was night one in Malta. Day one actually was beautiful. Mr Wong limped over the hill to the hotel we were in and we all attended the private beach in front – watching a young bride and groom paraglide past along with various other interesting people taking off on jet skis etc Husband and Mr Wong organised some diving for the next day and we basically enjoyed a few hours swimming eating and wandering around St Pauls Bay – there was a Festa that night and plenty of fire works. It was hot but we were pleased to know my beloved the “Master diver” was going to be diving with Mr Wong for free when the lovely Spanish girl gave MrWong his dive refresher. I was going to relax by the water and see about hiring a car. I also made contact with my Aunts Cousin and organised a rendezvous to visit the cave my Aunt had lived in as a child. 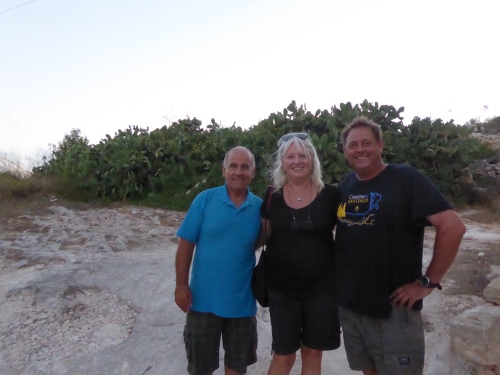 Mr Wong's luggage finally arrived on day 2 and Reno (the cousin) very kindly took us up to the caves where my aunt had grown up. Its hard to imagine the contrast between life in Malta during and after the war to life in Australia now. The caves had dirt floors and limited natural light but out the front was a beautiful view out to St Pauls Bay and the ocean beyond. The minute Reno walked into our resort I knew it was him as he looked more like my Aunty Maria than her own brothers! I am proud to be related to such a cool cave woman (married to my mums brother) and have a new appreciation for her father and his decision to take the family across the world to find opportunity and a new life. My grandmother had done the same taking a boat from Ireland when she was only sixteen. 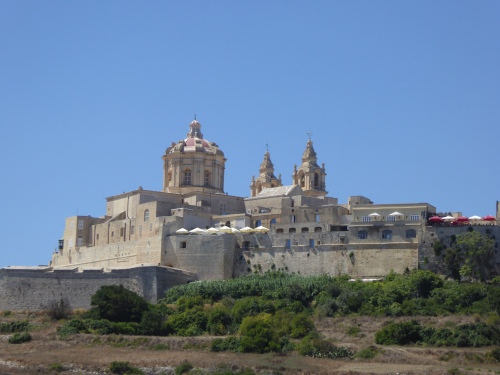 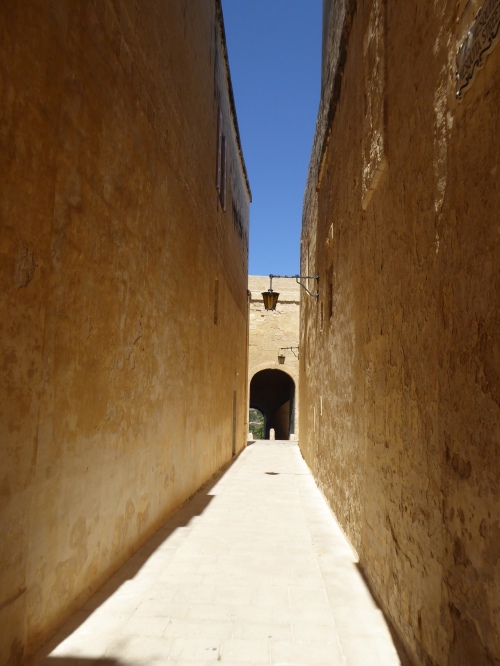 On a different note Mr Wong's dive refresher aggravated the already twisted ankle (clearly hiking over the hill between resorts didnt help either). So he had to give diving a miss for the rest of the trip. This meant we made use of the hire car and visited the Mdina – a beautiful old walled city in the centre of the island and we caught the ferry across to Gozo and unintentionally visited the inland sea and the Blue window. These are magnificent natural sites not to be missed on a visit to Malta. I also visited the Capital Valetta one day when Mr Wong's ankle was so swollen it needed a rest. I am going to put myself out on a limb here, it was one of the most beautiful cities I have ever seen. I have to say it was spectacular. The shear size of its outer walls are a sight to behold and both the city and the Mdina have been painstakingly cleaned and are undergoing works that highlight their grandeur. After the Medina in Marrakesh the Maltese city and Mdina were a real treat. 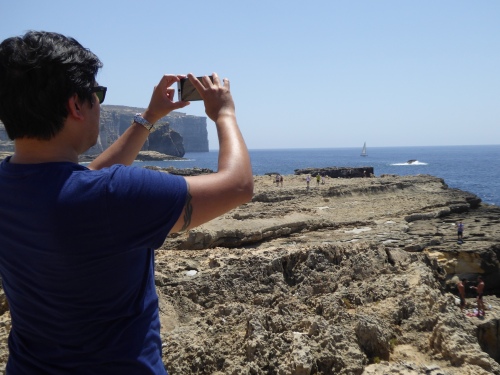 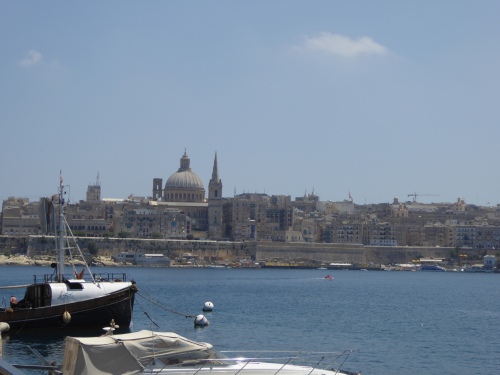 For the uninformed Malta has a history that mixes Arab occupation with French, Italian and finally British. Thus the name M'dina comes from the Arab world. There is also a strong similarity to the British way of life. In fact there were so many Brits there enjoying the summer – we were wondering if anyone was still at home! The Queen apparently spent a good deal of her time there as a princess when her husband was in the navy and Malta apparenlty has a special place in her heart. On a different note there is also evidence of prehistoric life and a questionable ancient relic sat smack bang in the middle of the Dolmen resort – Questionable due to the lighting, plumbing and general maintenance around it. 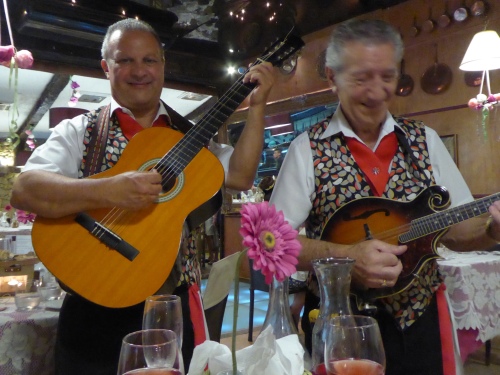 So after 8 nights in Malta ( and the not so impressive Dolmen resort) we finally headed back to London last Saturday. We had time to hike through Hyde Park (the tube was undergoing maintenance at our stop), seaat dance to The Commitments (the musical) on Saturday night and visit speakers corner and Camden Town on Sunday before a quick trip to Paris. 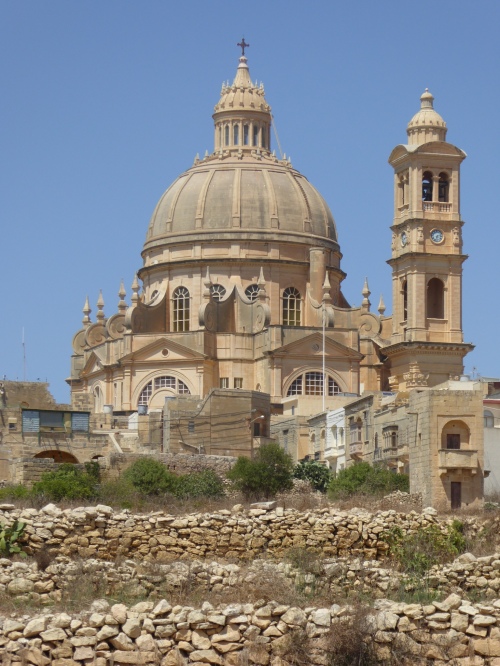