In ten minutes we commence our descent into Sydney Airport. We have travelled a long way since leaving home in May. Not just in distance but in personal achievement. In doing things together. In celebrating being alive. I commenced this blog entry in London and wrote some more in Dubai then some more somewhere over the ocean in between Madagascar and Sri Lanka. Its almost unimaginable thinking of the distances we have travelled and knowing it will all be over in a matter of hours.

I am not heading straight home to Brisbane on the next flight with my husband. My sister is in Sydney and will be undertaking further tests to determine whether her diagnosis will be motor neurone disease. During our travels news from home has often brought me to tears whilst walking and even in the middle of the night. Friends losing loved ones and being given terrible medical news for themselves. My father being resuscitated and rushed to hospital before being sent home (again). My sister's news was probably the most difficult for me to cope with. The first diagnosis she was given was Parkinson's. The next doctor thought that was not necessarily the case. Now we all hope it is Parkinson's. She is only 48 years old. Life is short and life is challenging.

I am tired, I am still proud to have walked 800 kilometres. My foot still hurts. Beloved husband thinks I might have done some serious damage. I have made an appointment with the GP for tomorrow. I suspect I may have injured my foot a little more than average as it hasn't really healed in the month since finishing the Camino – not that I've given it much of a chance!

Husband is thrilled to be heading home – he's tired – I think exhaustion has finally overtaken the thrill of travel. (Plus he wants to go diving!)

So what did we do the last couple of days? We headed to gay Paris as mentioned in the previous blog. We had two nights in the Latin Quarter there and managed to scale the Eiffel tower. 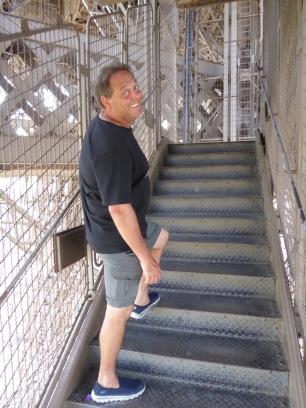 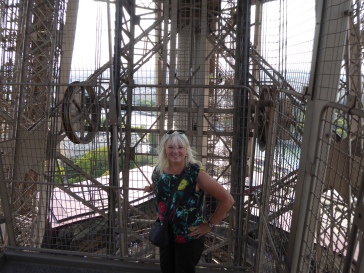 Well we didn't really scale it, we went up in the lifts but we couldn't help but walk down a few flights of steps – after all we'd walked 800 kilometres already!

We had a lovely sunset cruise down the Seine and caught a glimpse of why Parisians love to flock to the river in summer. 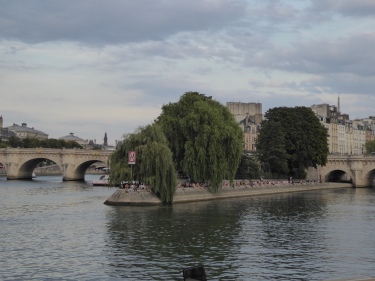 We also love the way Parisians can recharge their cars as they park.

Husband enjoyed the subway and pretended he was Marilyn Munroe

During the day we also hitched a lift with a Frenchman up the Champs Elysees – I have to say my feet appreciated the break and the young man was a wealth of information as we slowly meandered our way through the traffic and passed the sights to the Arc de Triomphe. 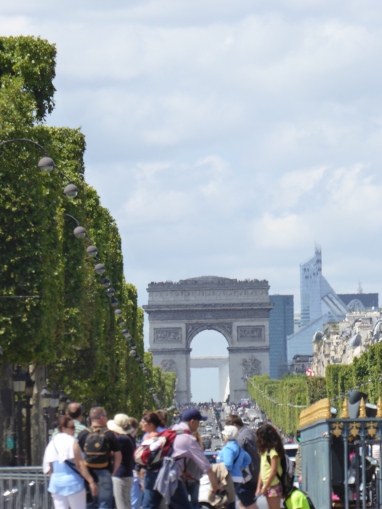 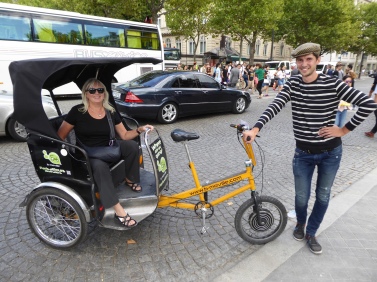 On arrival at this end of town we discovered “The Lido”. We had our first weekend away together to Paris twenty five years ago and had one of the best nights we remembered at the Lido – needless to say we grabbed a couple of tickets for that night to catch a bit of glamour on our visit. We headed back to the hotel and dressed up a bit for a change.

Sorry no photos of the show allowed.

The next day we headed back to London and stayed at one of the few hotels close to Liverpool st as we heard there was to be a tube strike and we had a very important visit to make out near the East Coast.

We stayed at the Montcalm The Brewery and have to say it was the most beautiful place we had stayed in in London. We were greeted by a doorman in bowler hat and had to have a photo with him. Given that we arrived with backpacks we were probably as much a novelty to him as he was to us!

After dumping our packs we headed out for a brief look around this end of the city and stumbled across the tower of London and Tower Bridge before heading back to the pub on the corner of our hotel which was called the Jugged Hare – later that night I would try a Jugged Hare Bomb which I managed to eat a little of before feeling a little too disturbed by the thought of it.

Mr Wong popped over and joined us for afternoon tea in the lounge of the Montcalm where we enjoyed a few sandwiches and some ginger beer before being confronted with the most delicious Macaroons you could imagine. I have to admit these few delights have resulted in an undeniable addiction. I see them everywhere. If there was a dealer on the corner I would buy them daily. I will seek knowledge of a supplier in Brisvegas if any are known. Perhaps I will have to buy them by mailorder or have them smuggled into the country… The mind is ticking. I have yet to have tried one in Brisbane that was as moorish as those at the Montcalm!

When the morning arrived we bid farewell to the Montcalm (a hotel we would highly recommend to others) – sadly we had a couple of troubles with the air con throughout the night so sleep was not as good as it should have been. We chose not to have maintenance visit at 2 in the morning as that might have been more disruptive than having the window open to the street was. They had tried their best before we nodded off to sleep already.

Anyway the tube strike had become a reality so next morning we headed off to Liverpool St Station with our packs on our backs and boarded the train for Beccles. For those in the know its a beautiful little English village in Suffolk. Our dear friend Helen (in Brisbane) hails from the UK and we were thrilled to be welcomed by her wonderful parents who have visited us in Australia for many a barbeque or luncheon over the years. Unfortunately ill health had thwarted more recent plans for them to come to Oz so we were thrilled to be able to catch up with them on their home turf. We also managed to meet Helen's brother Simon and his beloved Danielle whilst simultaneously enjoying a browse through their second hand shop and vintage clothing store. We were whisked away for lunch at a grand garden and visited Southwark pier and lighthouse before heading to dinner at a traditional seaside restaurant (with a lovely Australian chef would you believe!). 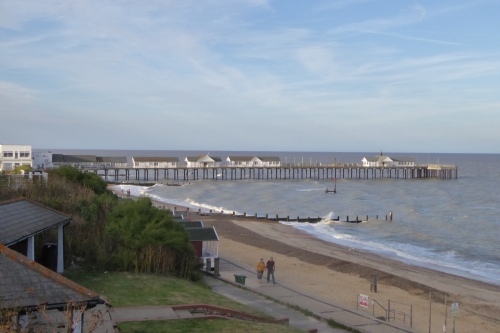 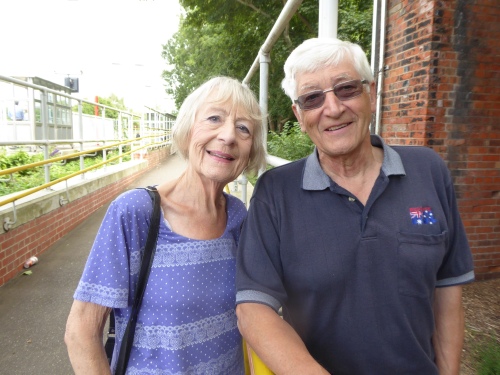 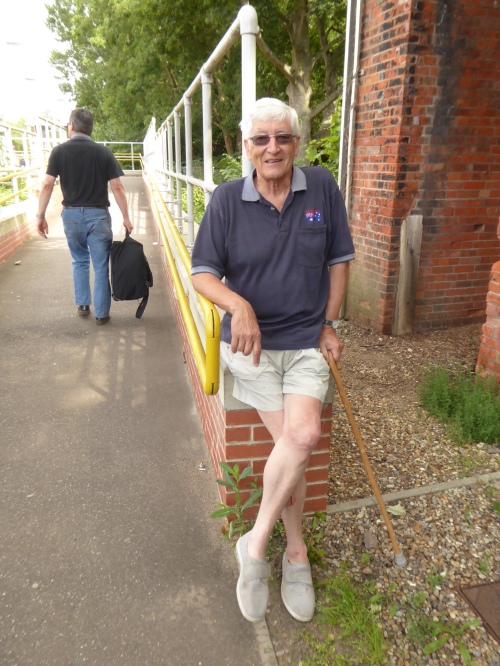 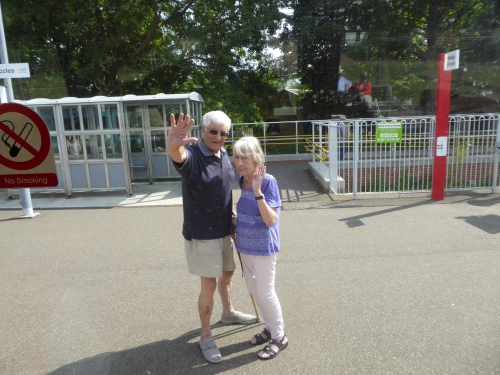 We had the best nights sleep in weeks before being pampered with a cooked breakfast and dropped back at the station to catch our train for our last night in London before heading home. What a wonderful whirlwind trip that was!

As you can imagine, we couldn't spend the last night in London doing nothing could we? So we headed down through Soho and caught award winning show “The Curious Incident of the Dog at Night” at the Gielgud Theatre on Shaftesbury Avenue. It was lovely to catch a West End show – the actors were great – the set was quite magnificent and, I had read the book so it was a novel way of seeing it presented. Whilst the West End has a wonderful atmosphere with people out on the streets enjoying the summer nights we are also very lucky to have such equally talented people in Australian theatre which is why I probably enjoy it so much wherever it is!

The next day we had arranged a late checkout so we slept in (a bit) and headed down to Harrods (as you do) for a quick visit before our departure that evening. As luck would have it we stumbled across the Oyster Bar almost as soon as we entered. A lovely Spanish couple moved seats so we could sit together – I enjoyed a chat in Spanish again (well sort of). We enjoyed a dozen oysters and a couple of glasses of pink champagne as cheers to our last day of travel – it was a lovely way to spend the morning! 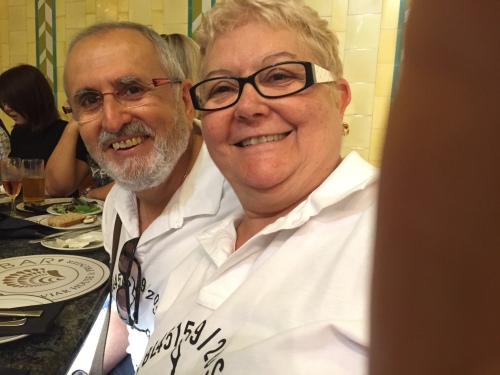 Mr Wong popped over with our excess luggage which he had kindly stored since Malta and he escorted us to Pizza and Paddington Station before bidding farewell to us at the door of the Heathrow Express.

What an absolutely wonderful adventure we have had – physical and mental challenges – visiting distant corners of the world – seeing old friends, meeting so many new friends and having experiences a few years ago would have been unimaginable.

Thank you for taking this journey with us! Adios until the next adventure! 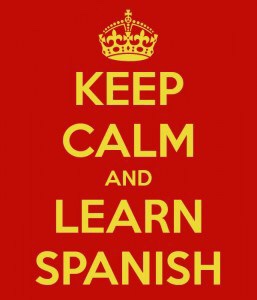