Before I start with todays post I want to let you know about a couple of other items I am pleased to have packed. I’m pretty sure I mentioned the sheeps wool the other day (fresh from the Nyngan farm I might add) but not sure that I praised the Leki hiking poles – they are light, folding and have shock absorption – perfect! The other items that today proved their worth, were the tiny rechargeable headlamps we brought. Perfect for an early start for both us and our companions!

Anyway we set the alarms for 5 and we packed and had a quick help yourself breakfast and we were on the road by 5:45am. We had street lighting for the first 45 minutes until we headed out past the university but then the head lamps were essential. 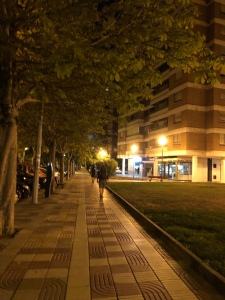 We only left Pamplona with our Irish yoga master however along the way we picked up a nice American lady who had been out there alone and felt the need for some company in the dark. Most of our other friends seemed to have moved on yesterday saving their rest days for somewhere else. We hoped to catch up with some over the coming days.

We made great progress for the first hour although I felt a little feverish still and was a lather of sweat despite the cool morning air. We stopped for a toilet break and a 2 euro coffee at Cizur Menor (enterprising man but not an inviting menu unfortunately – had he been offering chocolate croissants we might have been tempted to indulge.). Outside there was a farmacia dispensing machine that entertained us before we headed off. 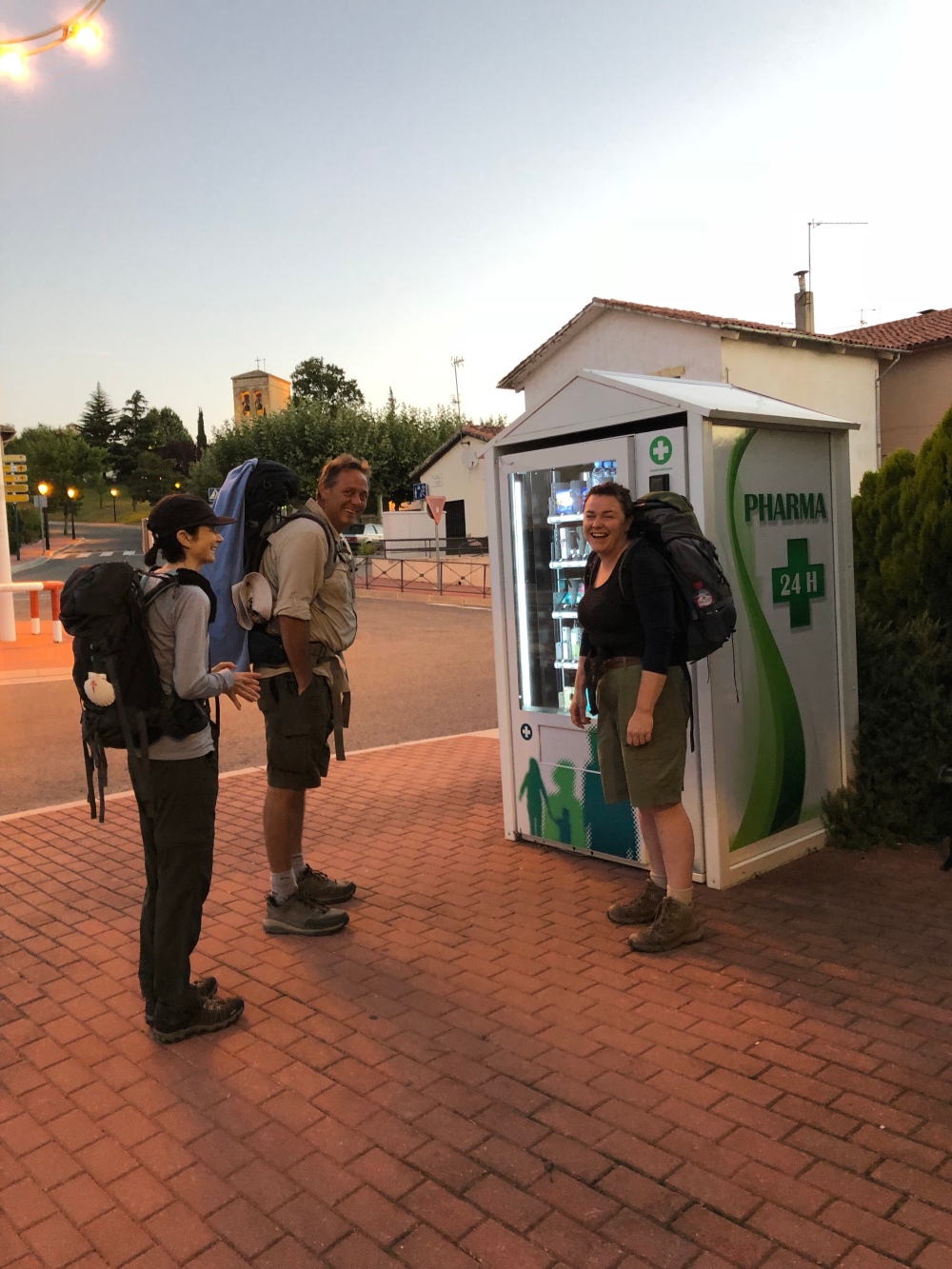 After this stop the sun started rising and our Irish Yoga Master and the American took off into the sunrise. My beloved and I made great progress – my feet felt fine with the hoka boots, orthotic inserts, injinji liners, 2xu plantar socks, and wool! It’s amazing how that much stuff can fit in a boot right?

Anyway we made it up to Alto del Peron in record time. Passed some sunflowers beforehand and took some pics. At the top I was even able to walk around and take pictures for other people! You may not recall but last visit here I had lay behind the concrete statue with my feet in agony before heading down the other side and stopping at Urterga because I could not take another step. 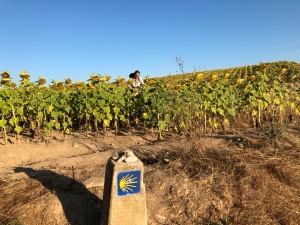 This time I went down that hill like a mountain goat. My beloved felt the threat of an overtake at every corner. I scanned the huge rocks and pebbles and located the smoothest path at every turn. No foot pain and even my knees held up until the last few hundred metres. After this I slowed the pace as I didnt want to create any long term damage although I noticed a little later an odd swelling above my right knee! A new problem it seems! Husband now started to feel a little ill and was surprised at my improving performance.

The day warmed up and after Urterga it became quite a challenge for both of us but we made good time and arrived in Puente La Reina just before 3pm. Our friends were already showered and relaxing. For us it was a long day!

We decided to relax with a beer in the caller major and it was at this point that we actually saw an Englishman an Irishman and a Scotsman walk into a bar! It was no joke !

Then, while still relaxing in the calle major (Main Street) the Irish spy suddenly appeared! Unfortunately she had met with a little bad luck coming down the same hill that I had just conquered and had a bad bruise on her shoulder and one on her leg. Nevertheless we were all glad to catch up and we managed to find a fairly decent feed (by pilgrim standards) just down the street from our albergue after which my beloved returned to his bunk as he was not feeling well at all!

The Irish yoga master and I escorted the spy back to the Bridge on the edge of town as she had been luxuriating in the only albergue in town with a swimming pool. (Yep I was sorry I missed that one!) We hatched a plan to meet before dawn at the same spot and walk on to Estella on the morrow. This was to be a top secret rendevous and we could share the details with no one.

At this point we headed back to the albergue and decided we needed a drop more wine to quench our thirst. As luck would have it the vending machine in the kitchen had a half bottle for 4 euro so we relaxed on the balcony in the cool night air before retreating to our beds for another big day tomorrow.