There was a great deal of excitement leaving the nunnery today. I don’t think I have ever seen so many people up so early. The Italians were up, the girls in the end two beds left at 4am, the Ukrainian James Bond look alike and his wife were up and so too were the singing Germans. The American Day nappers were even up. All except the Sommelier. “Bloody foreigners! What are they doing up at this hour?”

The truth is, everyone was scared. Was it the fear of being confronted by the nuns in broad daylight or was it something more sinister? There was something confronting us that legends say can make grown men fall to their knees and cry. The stories of fear have passed through generations and, as it is said, only the bravest or the most fool hardy would come back for more.

It may surprise you to know but it was the distance to the first Puebla that had people shaking in their shoes. Combined with the knowledge that someone up there turns the heat up at precisely 10am there was a rush to begin the 17km stretch to Calzadilla de la Cueza before the sun showed its head. We had competition for the hallway, the bathroom and even the pathway! 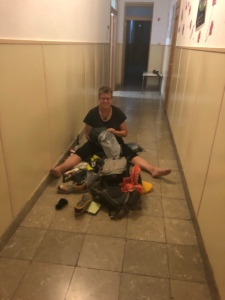 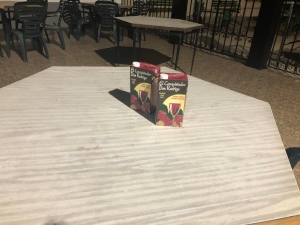 The emergency wine remained lonely on the table. Not a single pilgrim dared consume or taint their tastebuds. The Fräulein was ready to accompany us and the Irish Oracle was planning to catch us down the track. So off we went again, backpacks filled to the brim with water, snacks and dreams. The road was sealed and straight to begin and the head lamps followed us in a line.

Walking in the dark was a challenge with some newly grown blisters. My beloved followed the advice of the Dalai Lama and practiced patience and tolerance, frustrated that my pace had slowed even more.

We were passed by the sommelier some way down the track. He had slept an extra two hours after the foreigners had left and carried only one change of clothes and a cream for his legs. The oracle wasnt far behind and walked with the Fräulein ahead of my beloved and I.

The heat turned on at precisely 10am and we stopped to remove jumpers and other cold weather attire. We made it to Calzadilla at around 11 and ate ice cream and drank powerade as we recovered. The albergue we had enjoyed last time with our friends had been renovated. Remember the frenchman with the nice ass?

Well we all had a great night here at albergue Camino Real on our first camino and I would still highly recommend it for great service, great pool and now they even have great food! The paella looked spectacular but we had more walking to do!

We arrived at Terradillos de los Templarios exhausted and looking forward to a shower and a rest – we chose the devil we know as our room mate. The Sommelier had proven an impressive snorer but he was no match for the Brazilians. The Fräulein refused the share and went communal with the oracle.

Had an impressive pilgrim meal inside because the flies were driving us mad outside.

I battled the flys and tended to a magnificent blister that was progressing on the sole of my foot. We prepared our packs for an early walk and went to sleep at 10 with industrial strength earplugs to ward off unwelcome snoring.