Before arriving at Bercianos I vlogged to myself – I told myself to watch this if I ever want to do camino again. I shall mark it “In case of Camino Calling” and save it to my favourites!

I have to admit this day was a struggle. We started early and headed out of town after a bit of a struggle to find the yellow arrows both in the first and second village. The nights were darker now that the moon had gone into hiding. When we were manoeuvring our way through the village the singing Germans came up behind us. That certainly brightened our day. Then I saw some trees decorated for the coming season. That reminded me of some trees my friend at home decorates. That brightened my spirits too.

The singing Germans continued on their way singing and missed an arrow. My husband whistled them back and they were pleased to have been redirected. He is a champion whistler who can call back lost pilgrims from kilometres away! 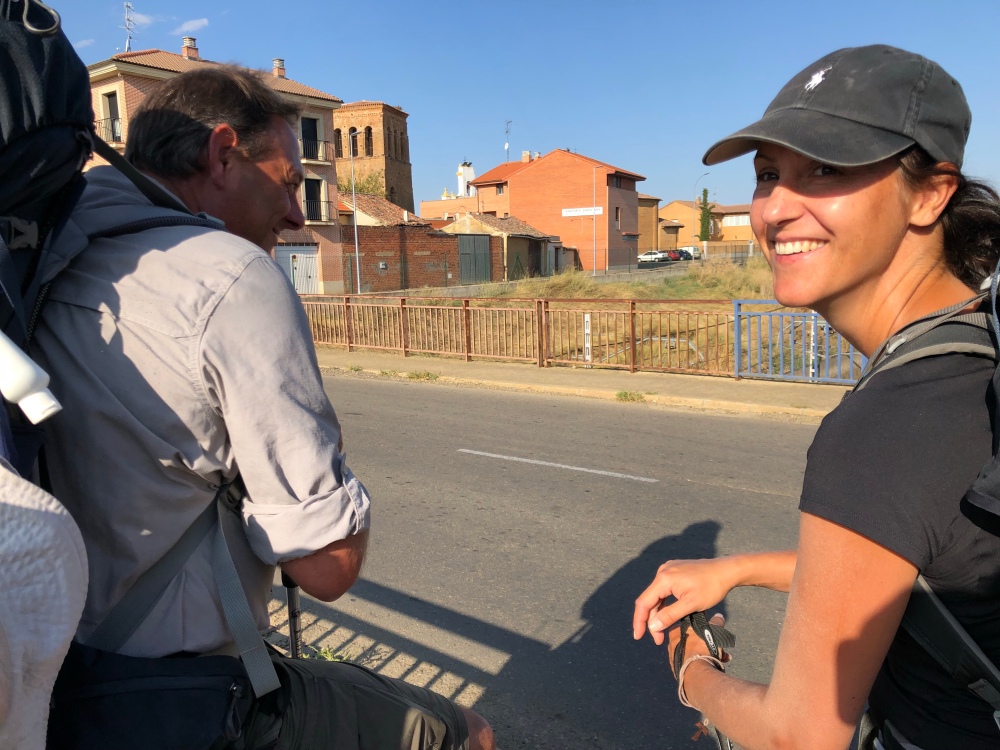 Anyway the Oracle eventually caught up as we were leaving a cafe after a little too long looking for my camera. He amused us with wit and commentary before we passed through Sahagun after taking the hypotenuse again. No point going out on a right angle to visit a Virgin Hermit who doesnt live there anymore is there?

Anyway the Oracle wanted to see the Virgin so he took off down the track. The Fräulein and my beloved and I hightailed it into town for some food. As luck would have it we stumbled upon the irish bar – we had found this one last camino and I remembered its lack of wifi! It seemed logical to await the oracle’s arrival at the said location. Irishman – irish bar – seemed sensible.

But the Irish Oracle somehow bypassed us and missed the Irish Bar! We sat too long waiting for his arrival. We eventually contacted him thanks to the marvel of modern technology and found him eating ice cream with the sommelier at the last bar in town. We headed down via an atm and found ourselves on another long straight road to Bercianos.

Nearing the destination town a sign to another hermitage gave us false hope. Then a beautiful new albergue appeared across the road. I stumbled in last, removed my pack at the first lawn chair and sat. I peeled my boots off and slumped into the seat. My beloved went inside and bought me a lemonade with ice. I held the glass to my feet and felt immediate relief. The oracle handed me an ibuprofen and, funnily enough, I wondered where is the medicine woman when you need her?

I noticed someone pulling the curtains back and peaking out the window behind me. Before I knew it the hospitalario was handing me a bag of ice.

The ibuprofen and the ice were enough. 15 minutes later we were back on our way for the 1km stretch to the other side of town. I had tried to avoid ibuprofen for its detrimental affects on the stomach but the balance of pain in my feet meant it was needed!

Our albergue this night was a bit of a dissappointment. I had called from Sahagun Irish pub to see if we could get a twin room. This was lucky on the one hand because when we arrived the Oracle missed out and had to go to the donativo. But on the other hand apparently the Sommelier was there also and they had a great communal meal and watched the sun set together. Sadly our twin room was like a cupboard with a paper wall and, guess what? The Brazilian snoring champions were on the other side of it! Also our albergue had no food and its kitchen was less than appealing.

You win some you lose some!

I had a pizza from a local bar – this resembled a $2 frozen pizza from the local supermarket back home! Not good. I went back to tend my feet, the Fräulein did her house keeping and journal writing and my beloved located Jack and his accomplices at a bar further up.

He came back and led the Fräulein and I back for a catchup and, after we had finished pinching patatas brava off their dinner plates, we stood to leave. Then what do you know it? The Sommelier, the Irish Oracle and the two young Germans we had been meeting since the nunnery (let’s just call them the Young Ones) came in. They had been amused by my missing camera saga earlier in the day when I made a few calls to no avail and then located it in the bottom of my pack! Well we had to sit back down didnt we?

Not for too long though. I had developed a blister on the sole of my foot and had suddenly become the subject of blister of the day myself! I trotted off to bed, tended this and another two blisters and fell into a not too deep sleep!