Left Belorado under moonlight knowing that we’ve been killing ourselves in the heat of the day. I put compeed on both feet in the hope of comfort – actually my blister was looking alot better but I thought the ankle was swollen and it may have been twisted through compensating for the blister. About 4 km out I realised my whole left calf was swollen so out came the compression stocking I had worn for the two days out of Pamplona. If its not one thing its another! Husband has sore heels now and the heel pads we bought him do not seem to be helping much but off we went for the long trip to San Juan de Ortega. The problem here was that there were about four villages in the first 12 k’s then nothing as we pass through the mountain range for the next 12k’s. 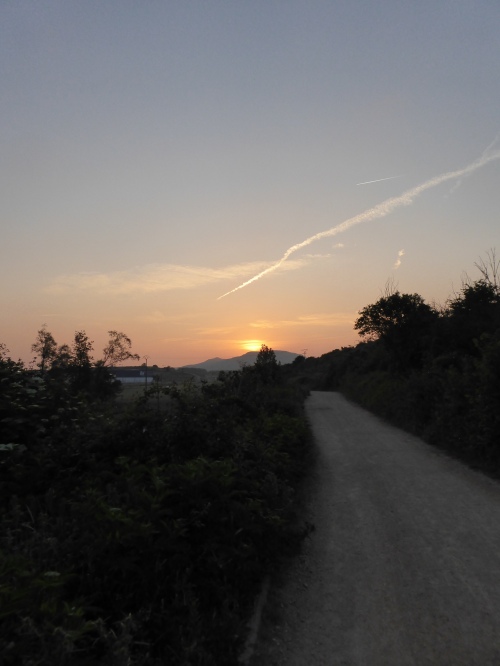 As we left in the dark cool morning we stopped and put our warm stuff on as it started to feel a bit cold as we left Belorado and the wind caught up with us. A couple of kilometres out we spotted two of our more lively friends from the last albergue. Actually, as I recall it they had been allowed to use their breakfast cards for beer instead of breakfast the day before and had henceforth been enjoying the sunshine out by the pool for most of the day along with the beer. They were intent upon leaving at 4am in the morning so that they could see the sunrise on the camino. We were dubious of their capacity to undertake this task but I was told clearly “We’re still young we can do it – no problemo!” As it turns out, they were kicked out of the hostel around midnight and had only made it 2km up the road to pass out in the grass on the side of the path. As we arrived, the sun was rising so they actually did get to see the sunrise on the camino – just not in the way entirely as planned. So it is true – the camino does provide!

We bid farewell and about 50 metres further down the track two more bodies were strewn across the actual path in sleeping bags. It reminded me of sleeping on the beach on the Greek Islands with my good friend Melissa a couple of decades ago. Not anything I’d want to do these days but husband and I had a good laugh as we pictured a different time and we certainly enjoyed their company. 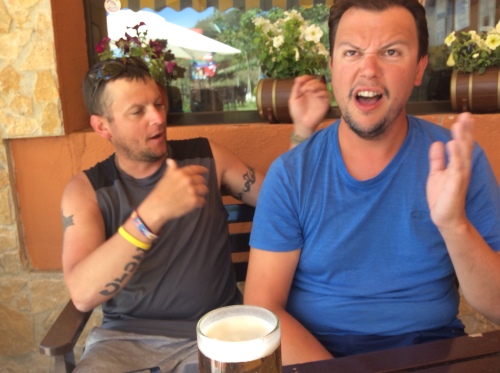 Just woken up on the track

Not quite woken up on the track

Anyway we kept going another couple of k’s and I stopped to investigate my “twisted ankle” to discover swelling down my lower leg and put on the compression stocking I had bought for flying but had used out of Pamplona as well (the joy that comes with having knee surgery and age) and there was another body in a sleeping bag – this time it was Jacob from Bilbao also partying on at the Albergue – he had the right idea – he was on the verandah of the mayors office!

A few more k’s down the track we were just leaving the only coffee shop we had seen open when they all piled in with packs on laughing and recovering from their wonderful night on the camino. I think it was Tib who was saying he had just finished college and had planned to do the camino as a celebration – but after a week or so with bruised achilles, aching head and heavens knows what other ailments he called his brother and said “this was the stupidest idea I’ve ever had!” We laughed cause we dont really know why we are putting ourselves through the pain either – not that we are indulging in the party scene as they are – gee we were in bed by 8pm last night otherwise there isn’t a hope in hell we would have been out the door before 6 to witness the feats of amazing stamina that comes with youth on the Camino! 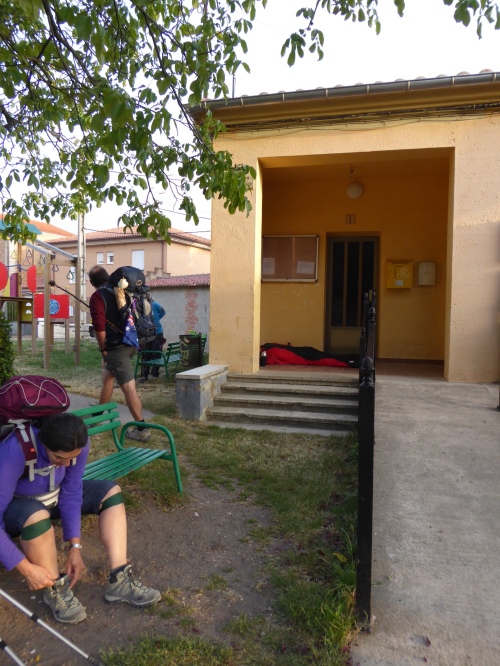 Outside the Mayor’s office – smart move

Well the last 12kms was a killer for us both I think. We stopped at a great rest stop with a foot rest on top of the first hill into these mountains – in past days bandits apparently found this area great for attacking pilgrims! Thankfully not so common these days. We were overtaken by Jacob from Bilbao and a couple of others, then Michelle who had slept right in the middle of the path came speed walking up the hill with bells on! Not really but they were all splitting up for the day and walking at their own pace dependant on injuries and afflictions. A little way on Jacob was relaxing with a couple of French guys and a couple of bottles of red. They still beat us into town!

My leg was increasing in pain even with the compression stocking and I slowed down and played Spanish lessons on my phone to distract myself while husband headed off in front playing the harmonica again. The last half was a long hard 12.5 km for me and a kilometre or two before town when I was really feeling the pain and wondering what was going on down in my socks, Michelle was heading back out to help carry the bag of one of the guys who had a knee injury. This girl is amazing, party all day, kicked out at midnight, sleep literally on Camino, walk 25 kilometres, then add another 6k’s to help out a friend.

When we finally hit town our favourite Frenchman with his nice Ass was there again! And all the Belorado albergue clients were lined up along the grass opposite the Albergue with Antony and Marten ready to sleep the night. 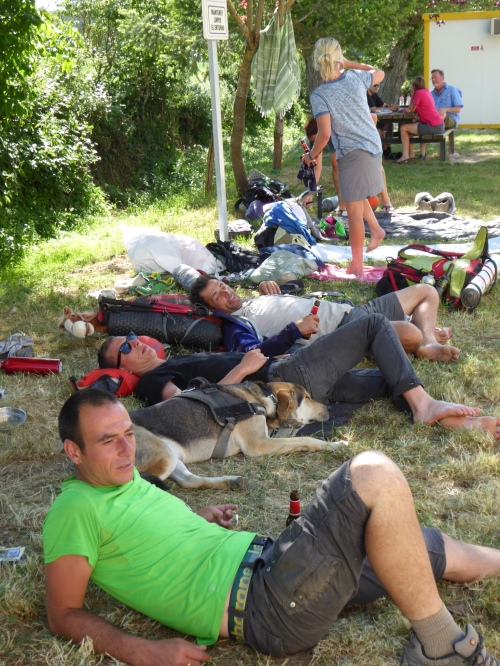 Tonights camp (not for us)

It was a tiny little village with a very unique church. I noticed they had real candles (and lit a couple again) and they had a prayer area where the priest lit Indian incense and provided floor rugs for people to sit on the floor and pray. This guy who started this place was great friends with Santo Domingo of chicken town fame and was apparently also very important in the history of the Camino. I spent quite a bit of time in the Church contemplating, marvelling and hoping and praying that my legs and feet would hold up for the rest of the journey!