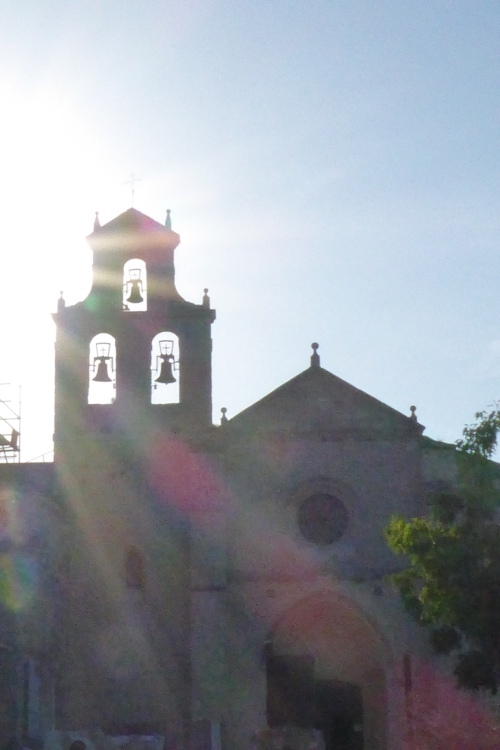 We finally decided it was necessary to send our packs on for the day. It cost 5 euro each and the van picks them up wherever you stay and then drops them off in the next big stop at wherever you tell it to. My leg was still swollen and the prospect of near 30km with 10kg seemed absurd and could well have been the end of my Camino. Anyway husbands heels were giving him grief also. So we both organised day packs with important items and some food and water. There werent going to be any 12km wilderness sections so we thought we could survive without our water bladders and just drank a lot of water before leaving and took a plastic bottle each to fill at the water fountains. I also drank two cafe con leches from the machine in the foyer, ate a banana (cause the shops dont open early enough for breakfast) and carried an apple and some biscuits. The biggest thing in my day pack was my medical kit consisting of sewing kit, baby scissors, numerous blister pads and bandaids, compression stocking for other leg, pain medications etc etc .

No-one but us on the road

It was cool again thank heavens as we left a bit late (8am) and walking in the heat is really not a smart idea. Noone was left on the grass opposite the church albergue and all in all the track was a little quiet again. Thats what happens when you are the last ones out of town we thought. As it turns out people dont actually overtake as often when you lighten the load and walk with a day pack so it feels like you are alone. I was like a new woman! We kept thinking we had forgotten something. Our loads were so light it was easy now to understand how those people kept overtaking us the last couple of weeks. But we felt like pilgrim criminals!

Every time we stopped we told people how wonderful it was and how we hadnt done this before ! Not sure why we felt bad but I assure you after 10km or so there were no regrets! Our albergue friends were stopped again here and there – no doubt drinking red wine and smoking away. Then they would zoom past and laugh.

This was a long day with a fairly steep horrible rocky bit leading up to the last rise before seeing Burgos. Thank heavens I didnt have my pack as my feet would have given up under the pressure. I imagined this was like the surface of some far off planet where molten lava had settled in sharp uneven valleys all down the hill. Before reaching this area we passed a military zone where some strange looking rocks were sitting in a paddock filled with sheep. We wondered if these were for sheep licking or whether the military had developed some new form of rock. It all added to the eeriness up here on the hill!

We always feel a sense of achievement reaching the top of these difficult inclines and at this one the breeze was blowing and we were able to lie down on two bench seats and rest for a few minutes and have a snack and a drink. I was certain I would not have made it there had I not sent my pack on. 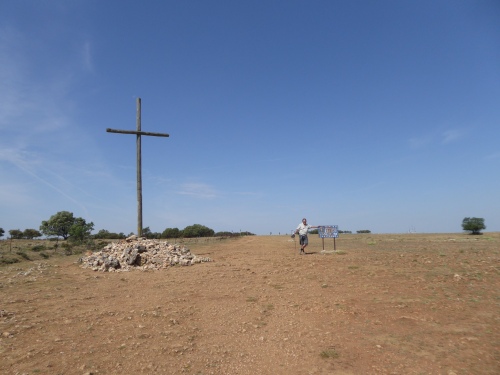 Hooray at the top – again!

Whilst we could see Burgos straight ahead the road clearly took the longest possible way winding down into a valley and through a few towns before heading back towards Burgos. You could understand this from a historical point of view and to boost the economies of these little towns but most of them were dead as doornails and you had a hard time finding a water fountain let alone an open shop where you could buy food. At most there would be one cafe open in a town. Sometimes you feel like you have struck gold with well stocked fridges and shelves – other times it was like shopping in Moscow during perastroika when all they had in stock was half a dozen eggs and a loaf of bread! 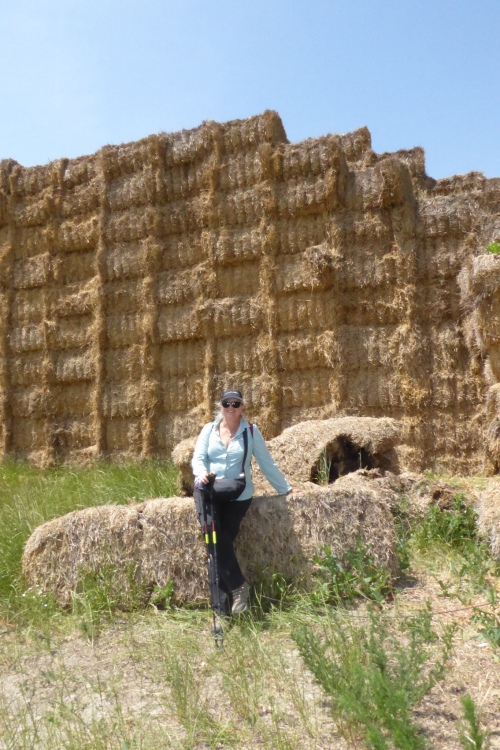 Rest on a haystack

We tried to find the alternative route into Burgos but missed it somehow and ended up on a 12 km hike through the industrial outskirts into the city – with very few shops it was somewhat barren not unlike the wilderness section the day before and I was in agony again. We both felt the sun reflecting off the concrete footpaths and the hardness was not at all conducive to comfort levels in those hiking boots! Luckily I needed a toilet stop and husband located a bar attached to a service station. This was a good break in air conditioning with some fairly tasty tapas and a shared cerveca to keep our spirits up.

We headed out for another 5 k’s or so and I was feeling the pain in those lower legs let me tell you – then miracle of miracles – our first McDonalds in Spain! I know it sounds tacky but they are clean and cool – remember that if you are ever stranded in a concrete jungle with swollen aching legs! My phone had run flat also so it was an opportunity to recharge my legs and my phone! One of the French guys was in there and the (oops not spaniard) another Frenchman who also had a nice ass popped in for a drink and a feed. There were a bunch of American college students with an Irish girl and everyone enjoyed the break even though there was only about 3 kilometres to go.

Jacob and the other French man with the nice ass

I think those last 3 kilometres took about 5 hours – not really but it felt like it. We stopped at a couple of shops when they started appearing and I sat on the odd bench seat with legs up here and there. It was a hard slog! We passed the albergue bunch again in a park and finally hit our hotel not a minute too late. Our packs were waiting for us behind reception at the Hotel AC and I was ready to collapse. Thankfully we were right in the swing of things opposite the river and around the corner from the Cathedral. I soaked the legs in a cold bath and rested before we headed out for dinner. A friend had emailed me and recommended an Italian restaurant called La Mafia and we tracked it down and had a great meal. It was difficult to walk there and back but it was not difficult to fall asleep in the beautiful clean sheets of this nice hotel! I resolved to see a physio on the morrow and drifted off into slumber land. 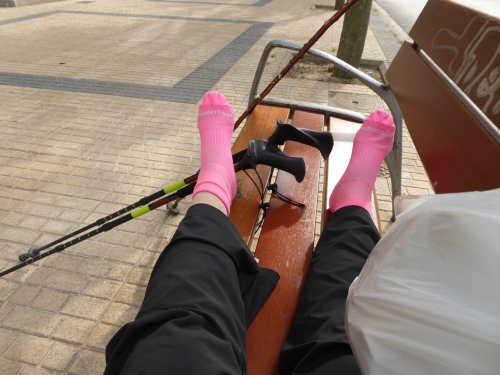 Finally a glimpse of cathedral 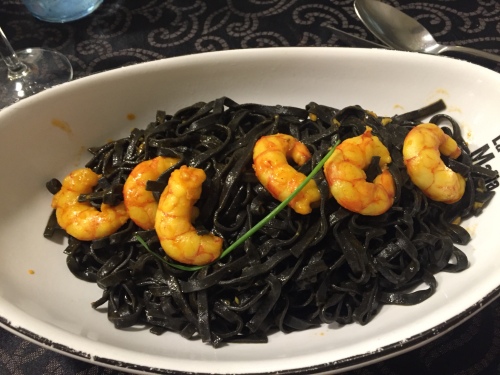